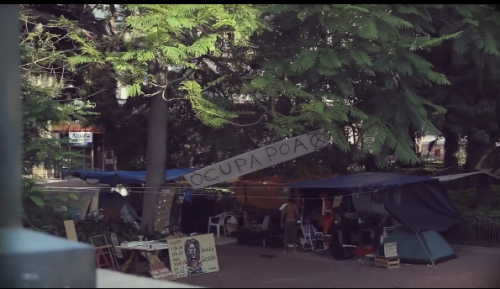 PORTO ALEGRE, Brazil, Mar 20 2012 (IPS) - In this southern Brazilian city that has an international reputation as a pioneer in environmental policies and citizen participation, the city government has set an eviction date for the small protest movement that is occupying the central square.

But the protesters say they are not leaving.

The Occupy Porto Alegre group has occupied the central Praça da Matriz square for three months, as of Tuesday.

But municipal environment secretary Luiz Fernando Záchia says they had asked him to be able to complete a three-month stay and then leave on their own on Wednesday Mar. 21.

However, if that doesn’t happen, and “if the office of the public prosecutor decides they should leave and a legal order to that effect is issued, the park guard service can act,” Záchia said.

But on their blog, the movement said that no agreement had been reached with the city government and they did not plan to pack up their camp and pull out, because the protest action is protected by the Brazilian constitution.

Occupy Porto Alegre, inspired by the 2011 Arab Spring and Spain’s “Indignados” movement, met in January with the representatives of several other Occupy and Indignados movements during the Thematic Social Forum, an outgrowth of the World Social Forum.

The demonstrators set up their tents on Dec. 20 in the central Praça da Matriz, which is surrounded by the Palace of Justice, the seat of the government of the state of Rio Grande do Sul, the state legislature and the metropolitan cathedral.

This square has traditionally been the site for rallies and demonstrations, with groups ranging from landless peasants to the teachers’ union frequently gathering here to protest.

But now, some 30 people have been taking turns staying in the group’s tents, which draw visitors and the curious and have become a hub of debate on clean energy, organic food and human rights.

Like the rest of the Occupy movements around the world, also inspired by Spain’s Indignados movement, which emerged in May 2011, the Porto Alegre movement prefers not to have formal leaders. The participants all speak for the group, and decisions are adopted in assembly.

Mauricio, a 19-year-old student of social sciences at the Federal University of Rio Grande do Sul, came to the square as soon as he heard about the camp. “This is a form of protest against unbridled competition; we’re demonstrating for peace,” he told IPS.

The schedule of activities has included meetings with environmentalists to discuss the controversial reform to Brazil’s forestry code, which is making its way through Congress, and the impacts caused by the huge hydroelectric dams under construction in the Amazon jungle and other parts of the country.

Members of the group will take part on Friday Mar. 23 in a public hearing on the Paiquerê hydroelectric dam to be built on the Pelotas river between the cities of Bom Jesús in Rio Grande do Sul and Lages in the neighbouring state of Santa Catarina, in southern Brazil.

“The hydropower plant is close to being approved,” said Luís, a 22-year-old biologist. “We’re going to argue that it is unconstitutional, because it threatens endangered species and the Mata Atlântica (Atlantic rainforest),” an ecosystem that once stretched over much of the eastern edge of Brazil but now survives only in small degraded patches and protected areas.

“They’re going to flood 4,000 hectares and destroy araucaria (Brazilian pine) trees that are hundreds of years old. The area is an ecological corridor,” he told IPS.

Municipal environment secretariat staff visited the camp twice, on Mar. 9 and 12, with the intention of evicting the Occupy movement. On both occasions the demonstrators told them that all decisions were reached by consensus in assembly, and that there was a lengthy schedule of activities to celebrate the camp’s three-month anniversary.

Secretary Záchia has been trying to avoid a confrontational tone. “You have to understand that this is a democratic city that has room for all movements, large or small. It’s not up to me to say who has the privilege of staying,” he told IPS.

Porto Alegre was a pioneer of environmental policies in the 1970s; in 1989 it developed the world’s first full participatory budgeting process; and in 2001 it became a global reference point as the site of the World Social Forum (WSF).

But the occupy movement “is also petering out in other cities,” Záchia said. “And I repeat: they were the ones who set the Mar. 21 departure date. All I am supposed to do is organise my park maintenance team, to go in on the 22nd and do the necessary work, because conditions in the square have deteriorated.”

The secretariat’s staff have found damages to the vegetation in the square, as well as destruction of some portions of the mosaic-style Portuguese pavement or calçada portugesa.

There have also been complaints from “dozens” of local residents because the tents have been set up in the shadiest places, which is a problem during the heat of the southern hemisphere summer, the official said.

The demonstrators respond that they have talked to the people who use the park. “Their requests that we clear some parts have been addressed,” said another protester, Analise. “We cleared paths so they can walk through without any problems.”

The group’s web site provides links to related movements in São Paulo and Rio de Janeiro, as well as Spain, Britain and the United States, which are preparing for a major global day of action on May 1, International Workers Day.

But until then, and before joining forces to tackle broader fights, the Occupy Porto Alegre activists will have to battle for the very survival of their movement. “Our strategy was to ask to be allowed to stay until Mar. 21,” Alfeu, 21, told IPS. “But the idea is to not leave,” said another demonstrator.