PARAMARIBO, Suriname, Mar 12 2012 (IPS) - More than a decade of efforts to promote closer socioeconomic cooperation among the 15 nations of the Caribbean Community are threatened by stagnant funding and a grim global financial situation, experts warned here. 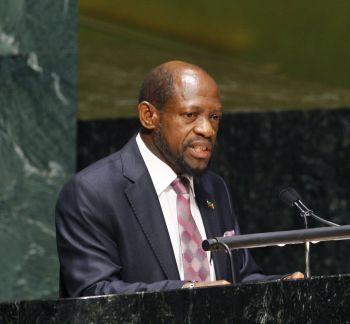 St. Kitts-Nevis Prime Minister Dr. Denzil Douglas conceded that the world in which Caricom was born "is no more". Credit: UN Photo/Devra Berkowitz

Their long-awaited report was made public at the Caricom grouping’s biannual summit that ended in Suriname last weekend. It was written by a team of independent consultants contracted by Caricom in 2010 to analyse the bloc’s effectiveness and future prospects.

St. Kitts-Nevis Prime Minister Dr. Denzil Douglas conceded that the world in which Caricom was born “is no more” and that geopolitical, socioeconomic, and other global stresses have caused “our operational landscape to be ever-changing, and our problem-solving challenges ever more complex.

“Caricom, therefore, must continue to adapt and re-invent itself – never in terms of our undergirding values, purpose, and principles, of course – but certainly in terms of how we function, how we operate, the extent to which we are, or are not, efficient, effective, relevant with a sharper focus on being more results oriented.”

He warned that “Caricom must position itself to become more meaningfully engaged, though not subsumed, into other regional groupings.”

There are specific reasons behind Douglas’s concerns. The global economic crisis has hit the region hard, particularly as it impacts funding from traditional donors like the European Union.

The Caribbean Single Market and Economy, considered Caricom’s flagship project, is a key area where progress has been slow.

The report said that if Caricom, now observing its 38th year, and other regional institutions continue to struggle for funds, they could collapse in another four to five years.

The operating budget of the Guyana-based Caricom Secretariat has remained stagnant at just under 20 million dollars for the past four years, despite inflation and an increasing workload of international travel, commissioned studies and other tasks.

Requests for additional funding have been denied as member governments blame harsh economic times, the report noted, adding that many member countries are highly indebted and struggling to meet domestic and international commitments.

For example, Belize, the Central American Caricom member state, is the 13th most indebted country in the world and faces a schedule of rising interest rates over the next 12 months.

Ratings agencies Moody’s Investors Service and Standard & Poors downgraded the country’s foreign-currency sovereign rating deeper into “junk” status after Prime Minister Dean Barrow, who was not present at the summit here because of the general election in his country, said his first act after his re-election would be to renegotiate the terms of Belize’s so-called superbond, which makes up half the country’s debt and 40 percent of gross domestic product.

Suriname’s President Desi Bouterse, who has assumed the chairmanship of the 15-member regional grouping, said that the in-depth analysis of Caricom institutions “must lead us to a better way of doing things, a faster response to false starts and wrong directions”.

He acknowledges that the reform is a “tall order” even though “knowing the problem can only be a first step.

“Friends, we have to face the fact that we as elected officials often use the shortage of financial means as an easy way out, when we choose to refrain from implementing programmes of a sustainable nature,” he told his colleagues.

“The problem is, and has always been, with implementation,” prominent University of the West Indies (UWI) academic, Professor Norman Girvan, previously told IPS. “CARICOM decisions do not have the force of law, and there is no real machinery to ensure implementation.”

“And at the root of this is the reluctance of member states to share their insular sovereignty with the community of all regional states acting collectively,” added Girvan, a former secretary general of the Association of Caribbean States (ACS).

Caricom’s new secretary general, Irwin LaRocque, vowed that “the decisions that will be made …on the recommendations” will provide him with the basis for addressing the challenges faced by the Secretariat in its efforts to fulfil the role and function that regional leaders themselves envisage.

“I have no doubt that changes will flow from the recommendations of that report and we must all be prepared to welcome those changes. Change will have to be managed; it will not be easy; it will definitely require a new mindset; a new way of doing things,” he said,, recalling a similar statement he made last month, adding “today I will add to that, a new culture must be injected into the organisation that I lead.

“Given the magnitude of the task, a change facilitator is necessary to assist in giving the focussed attention it deserves. It is an urgent prerequisite and should figure among the most immediate and pressing priorities as we go forward,” he said.

La Rocque has argued that the Secretariat must become “more strategic in its approach to its tasks and its advice” to the other organs and institutions within Caricom, adding that the “challenge in delivering this transformation is in determining how we will get it done.

“The buck, as it were, starts here,” a confident La Rocque added.

Veteran Caribbean journalist Rickey Singh wrote that while the central message of the Suriname summit “is an assurance that the long recognised and recommended overall of the Secretariat should soon get underway”, there is indeed a caveat.

“It may involve a long route, at least another five years, for a new ‘strategic plan’ which embodies management reform and implementation processes, to unfold with the intention of arresting current pessimism and cynicism about the future of the 38-year-old economic integration movement”.

The outline of the five-year strategic plan will be considered by the regional leaders when they meet in St. Lucia for their annual summit in July.