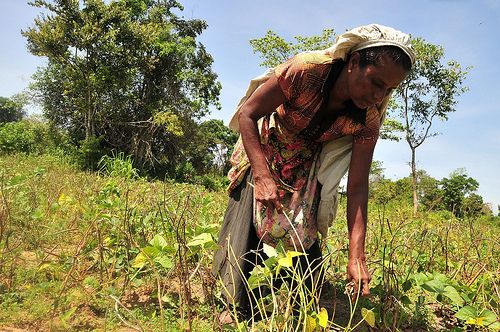 Woman works in family garden next to forest in village of Pillumallai in eastern Sri Lanka. Credit: Amantha Perera/IPS

UNITED NATIONS, Mar 13 2012 (IPS) - When the United Nations concluded a two-week session highlighting the plight of rural women last week, the meetings singled out both the achievements and shortcomings of the ongoing relentless battle for gender equality in a world still dominated – and overwhelmingly ruled – by men.

The 45-member Commission on the Status of Women (CSW), the global policy-making body fighting for women’s rights, focused its priorities on the empowerment of rural women, including ownership rights, gender disparities in land holdings and the unequal access to productive resources in agriculture.

According to U.N. estimates, the international community contributed 7.5 billion dollars in official development assistance (ODA) to rural development during 2008-2009, but only a paltry three percent of that amount was earmarked for programmes where gender equality was the primary object.

Judging by the inherent shortcomings, the corresponding figures for 2010 and 2011 are not expected to be any better.

As Ann Tutwiler, deputy director-general of the Rome-based Food and Agriculture Organisation (FAO), points out, the gap in agricultural production and productivity exists not because rural women were incapable of farming, but because of social constraints.

“Female famers produced less than their male counterparts because they lacked access to seeds and credits,” she said.

Simple investments in water pumps alone could save women billions of hours a year, she added.

In short, she argued, 100 to 150 million people are still hungry and a significant share of agricultural production is missing primarily because rural women’s economic potential is being squandered.

But apparently all is not lost.

Cheryl Morden, director of North America’s Liaison Office of the International Fund for Agricultural Development (IFAD), points out that the number of the world’s poorest women with micro-loans increased from 10.3 million in 1999 to 113.1 million in 2010.

However, while microcredit had lead to women’s empowerment, it has its limitations.

“To enable rural women to get a stronger foothold on the pathway out of poverty, they need a broad range of financial services, along with other kinds of support,” she added.

Asked what the United Nations has achieved so far in terms of gender empowerment over the last two decades, Anwarul K. Chowdhury, a former U.N. under-secretary-general and currently a senior special advisor to the president of the General Assembly, pointed to U.N. Security Council resolution 1325 adopted in October 2000.

“It has been the most significant decision of the U.N. in terms of asserting that peace is inextricably linked to equality between women and men, and also calling for equal participation of women at all decision-making levels along with equal access to policy processes,” Chowdhury told IPS.

“The political and conceptual breakthrough for 1325 was achieved eight months before in March of that year for the first time in the Security Council when as its president, I could lead the Council’s 15 members to reach consensus on the statement that outlined the elements of 1325.”

The main thrust of that statement was participation of women on equal footing. “However, we have to be more determined to achieve that objective both nationally and internationally,” he added.

A strong advocate of women’s rights, Chowdhury said the “agreed conclusions” of the just-concluded CSW’s 56th session could have brought out more forcefully the debilitating negative impact of war, conflict and violence on rural women.

“It failed to recognise that rural women still face enduring challenges to their human security which continues to exacerbate where there is proliferation of weapons, particularly small arms and light weapons,” he said.

Rural women’s natural ability to mobilise the community in times of conflict and disaster was not recognised and supported. Experience has shown that 1325 is very relevant in this context for rural women, Chowdhury noted.

He said a strong focus should have been on the improvement of the human security of women in conflict zones.

As the statement by the Association for Women’s Rights in Development (AWID) released last month has underscored, building on the potential of rural women to improve their human security through active involvement within policy processes and political decision-making is a precondition for achieving lasting peace and security.

It also called for implementation of gender-sensitive security measures developed together with rural women.

Asked what needs to be done to advance the cause of gender empowerment over the next decade, Chowdhury told IPS, “I strongly believe that the adoption of 1325 National Action Plan (NAP) by each of the U.N.’s 193 member-states is potentially the single-most significant step that could be taken for women’s empowerment and participation in general and in the area of peace and security in particular.”

As of now, he pointed out, only 35 countries have their respective NAP’s ready.

“But there should be concerted time-bound efforts made in that direction, particularly by U.N. Women which has accepted 1325 implementation as one of its priority mandates,” he said.

Meanwhile, the most comprehensive and potent opportunity to advance the equality, empowerment and participation of women would come from the Fifth Global Conference on Women in 2015 as proposed by the president of the U.N. General Assembly and the secretary-general in a joint announcement made last week on International Women’s Day.

“This is a remarkable initiative, first-ever jointly presented by the two leaders of the U.N. system, and it would be 20 years since the last summit in Beijing,” Chowdhury said.

The 2015 conference would not only review the implementation of the Beijing outcome but, more importantly, look into the new and emerging challenges and opportunities that women are facing and what needs to be done.

Resolution 1325, which was adopted five years after Beijing, would find a major rallying point in the new summit, he predicted.

The intergenerational transition with greater role and involvement of young people would also be a key element of deliberations there.

A significant new dimension of the 2015 gathering would be to take advantage of new technology to connect with and listen to women in various parts of the world who would not be physically present in the conference.

Meanwhile, the CSW approved several draft resolutions Friday, including on women, the girl child and HIV/AIDS; an end to the harmful practice of female genital mutilation; release of women and children taken hostage in war zones; indigenous women as key actors in poverty and hunger eradication; the elimination of maternal mortality and morbidity through empowerment of women; and gender equality and the empowerment of women in natural disasters.

But the only draft resolution put to a vote was on the situation of, and assistance to, Palestinian women, which was adopted by a recorded vote of 29 in favour to two against (Israel, United States), with 10 abstentions (Belgium, Colombia, Estonia, Germany, Italy, Japan, Netherlands, Republic of Korea, Spain, Sweden).