PESHAWAR, Pakistan , Mar 4 2012 (IPS) - With no money to see a doctor, Gul Lakhta,50, had resigned himself to blindness when a ‘mobile hospital’ drove into his village in the Bajaur Agency of the Federally Administered Tribal Areas (FATA), on Pakistan’s rugged border with Afghanistan. 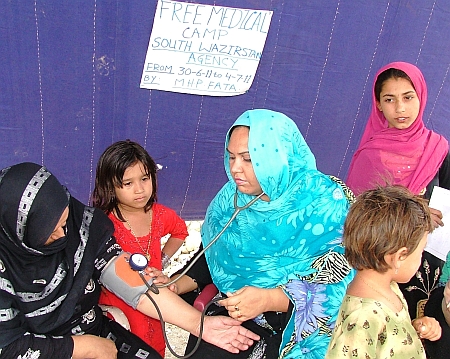 “They operated on me the same day. Now, my eyesight is excellent,” says Lakhta, a beneficiary of the Mobile Hospital Programme (MHP) started by the government in 2003 to provide healthcare to people in the war-torn areas of northern Pakistan.

After the United States-led coalition forces toppled the Taliban government in Afghanistan in 2001 its leaders fled across the border to the FATA and adjacent areas, bringing with them their fundamentalist ideology and culture of violence.

Before long, the Taliban had unleashed a campaign of bombings against their hosts, targeting schools, health facilities, markets, government buildings and forces, bringing life to a virtual standstill in the seven agencies that make up the FATA.

“In the process, Taliban militants also destroyed 60 health facilities, forcing patients to travel to Peshawar and beyond to seek treatment for even minor ailments,” said Dr Niaz Afridi, head of the MHP in the FATA.

The government allocates Pakistani rupees 60 million (660,000 dollars) per year for the programme and there are plans to expand it, Afridi said.

These clinics-on-wheels have proved a blessing for the patients because they are well-equipped and manned by dedicated teams. Currently they provide treatment to 90,000 patients annually.

“We also organise medical camps in areas which are inaccessible by the regular medical workers and our medical teams visit the remotest areas to reach the patients and provide diagnosis and treatment free,” Afridi said.

Dr Nauman Mujahid, development officer for health services in the FATA, said the MHP is manned by a staff of 150, including physicians, surgeons, gynaecologists and other specialists like ophthalmologists and dentists.

Each vehicle is equipped with a generator that powers a mobile operation theatre, a dental unit, x-ray and ultrasound machines and laboratories that allow for quick diagnostics.

The programme started with the South Korean government donating 14 mobile clinic units in 2003 to help the people in the insurgency-hit areas of the FATA.

Although the process of the rebuilding damaged health outlets is in progress, the MHP will, because of its popularity, continue to operate in the FATA with a fleet that was augmented in 2010 by the government.

Mobile hospitals are particularly effective in ensuring that patients who need to be on drug regimens lasting several months get their doses. This is especially so in the case of tuberculosis (TB) patients who, if improperly treated, can develop drug resistant strains that can endanger a community.

Waqar Ali, 46, who was diagnosed with TB at a free medical camp in North Waziristan three months ago, is now on medication he must take for eight months. “I am feeling better and do my farming like normal people,” he told IPS.

Authorities take care to notify people in areas where the camps are going to be held about a week in advance. Often announcements are made from the mosques.

Talking to IPS, Dr Bilqees Qayyum, a gynaecologist on the rolls of the MHP, says that people often come to the medical camps in droves with a variety of complaints.

“Besides running camps to treat patients routinely, we also rush to the areas hit by outbreaks of diseases, like measles, gastroenteritis and diarrhoea,” she said. “We were the first to reach the Hazara division in Khyber Pakhtunkhwa (KP) when it was hit by a massive earthquake in 2005.”

The MHP played a significant role in providing medical assistance to people displaced by military operations directed against the Taliban in Swat in 2009.

In the following year, MHP proved its mettle by providing emergency medical services to people affected by floods in the Nowshera and Charsadda districts of KP.

“Our highly trained doctors, paramedics and nurses have been awarded commendation certificates by government for their excellent performance in emergencies,” Qayyum said.

In 2011 MHP surgeons carried out operations on 13,000 patients and the numbers continue to grow, Dr Fawad Khan, director of health services in the FATA, told IPS.

“Given the success of the MHP, the KP and Punjab (provincial) governments have requested us to put in place a similar programme for them,” Khan said. “Our teams already visit these provinces in emergencies,” he added.