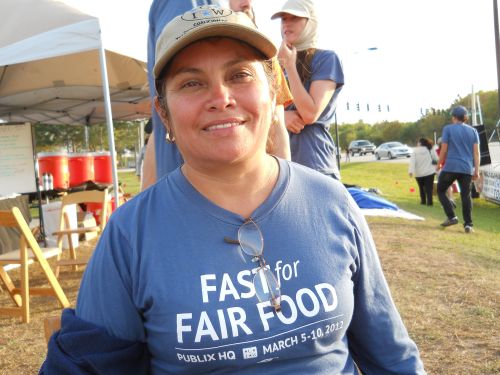 LAKELAND, FLORIDA, U.S., , Mar 15 2012 (IPS) - Dozens of Immokalee Florida farm workers left tomato fields behind last week and set up camp on the lush, corporate grounds of Publix supermarket to fast and protest the company’s refusal to pay a penny more per pound for tomatoes.

“If there were better conditions, like a fair wage, you would have the opportunity to provide for your family,” explained Nely Rodriguez, previously a farm worker and today an employee with the Coalition of Immokalee Workers (CIW), which has been pushing to improve the lives of Florida farm workers since 1993 and organised the Publix protest.

Rodriguez spoke on day three of the six-day fast-protest, over laughter and chatting from the 75 or so farm workers, students and members of religious organisations at the event. Every now and then, truckers and cars exiting the Publix compound honked their support as they drove by.

“It’s been an extremely powerful experience,” Marc Rodrigues, a CIW employee, said. “The only way it’s not going well is we have empty seats reserved for Publix officials and they haven’t come over and sat in our seats.”

By the close of the protest, which was visited by more than 1,000 supporters, including Ethel Kennedy and Kerry Kennedy, widow and daughter of Robert F. Kennedy, Publix still had not budged.

“If productivity standards are too strenuous, farmworkers should work for another employer,” Publix says in a statement.

“The CIW’s campaign against Publix is one directed at an acknowledged employer of choice and a great place to work,” Publix says.

“The truth is, it’s very difficult out there in the sun and heat,” Emilio Faustino said at the protest about the 12 years he has spent in the Florida tomato fields.

Faustino and 33,000 other Florida farm workers pick most of the tomatoes distributed to the U.S. East Coast, six to seven days a week in the south Florida sun, filling, carrying and lifting 32-pound bins of fruit by hand for 10-12 hours per day, while getting paid 50 cents per bin, or about 200 to 283 dollars per week.

“I see the Publix ads that say they support families. I would say we support our families. And for the betterment of our families we would like to work together with Publix and improve conditions,” said Faustino, 50, who lives in Immokalee with about 16 other men in a trailer with one bathroom, he said.

The 4,000 members of the Coalition of Immokalee Workers has been fighting for the per-pound increase – and more humane working conditions like providing shade and water to pickers in the fields – with unprecedented success.

Through marches, boycotts and public pressure, today more than 90 percent of Florida tomato growers abide by the improved working conditions, which include protection from pesticides and the right to complain about violations without being threatened.

Ten large food companies, from Subway to Whole Foods to Sodexo food service, have agreed to pay the penny increase and buy tomatoes only from those growers who are on board with the Immokalee workers’ agreement.

But Giant, Kroger’s, Martin’s, Publix and Stop and Shop have refused to sign on and continue to purchase tomatoes from the 10 percent of Florida growers who impose harsh conditions on workers. Other protests are planned and on Apr. 15, the CIW will march against Stop and Shop, in Boston.

“The wages have been very low. That’s how it’s been always been until recently,” Faustino said through a translator.

In 2011, the penny-per-pound increase made it into workers’ paycheques for the first time, and it matters, Faustino said. Depending on how much he works, he may see an additional 15 to 100 dollars in his paycheck, he said.

“I’m seeing changes in my life. I can buy better food,” Faustino said. “We never had shade in the fields. Now we have shade,” he said.

The new benefits are available to all eligible 33,000 farm workers, not just CIW members.

Some Florida tomato pickers work and live in desperate conditions where extreme exploitation thrives, including indentured servitude and rape by bosses.

CIW uses its radio station and visits to farms to get the word out to farm workers about their new rights under the Fair Food Program.

Since 1997, nine entities have been prosecuted under U.S. federal slavery and human trafficking laws, for actions involving about 1,000 tomato pickers. Workers in these cases were held against their will, beaten, forced to work, chained, and their wages taken.

The CIW is taking action against sexual exploitation of workers by crew leaders and bosses, Rodriguez said, and has set up a 1-800 hotline for workers with complaints.

“We’ve been able to go to farms and speak with workers directly about their rights,” she said.

She remembers that one crew boss was notorious for preying on young women when they left the group to use the toilet, she said.

“People were scared and didn’t know their rights,” so they didn’t complain, Rodriguez said.

Today, the Fair Food Program spells out that workers can’t be threatened with firing or violence if they complain. And CIW is there to back them up, Rodriguez said.

*Translators for this story include Marc Rodrigues, Brigitte Gunther and Jordan Buckley.