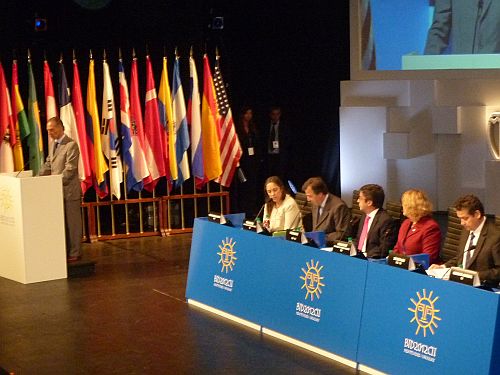 MONTEVIDEO, Mar 20 2012 (IPS) - The countries of Latin America and the Caribbean were able to cushion the jolt of the global economic and financial crisis by means of anti-cyclical policies, but they need to remain vigilant and pay attention to social inequality, their most vulnerable flank.

This was the prevailing conclusion on Monday at the end of the 53rd Annual Meeting of the Board of Governors of the Inter-American Development Bank (IDB), held in Montevideo Mar. 16-19.

“The worst thing we can do is think that recent events and the way we have coped with them within each of our countries will keep us safe from any storm,” said Uruguayan Economy Minister Fernando Lorenzo, who was elected the new chairman of the Board of Governors.

Lorenzo warned against “self-complacency” and said social inequality was Latin America’s main weakness. “Inequality is a weakness in terms of prospects for development, but even more importantly, for the consolidation and advancement of democracy,” he said.

This view dominated the plenary session of the Governors’ Assembly on Monday.

“Prosperity is only one side of the coin; the other is redistributive policies that promote greater equality. Latin America is one of the continents with the highest degree of inequality. Therefore, narrowing that gap is the major challenge facing economic and social policy-making,” Paraguayan Finance Minister Dionisio Borda told IPS.

“Fiscal policy must compel the highest-income sectors to make greater tax contributions, in order to pay for health, education, transport and technological innovation,” he added.

On the weekend, the IDB presented its 2012 Macroeconomic Report, indicating that the region might suffer a “relatively mild” recession if the debt crisis in Europe worsens and if the Chinese economy slows down.

But even if both of these events were to occur, the region would feel only a moderate impact. “We are cautiously optimistic,” IDB’s vice president for Sectors and Knowledge, Santiago Levy, said Sunday. “The region has grown strongly in the last couple of years and it has shown it is resilient to shocks.”

“Most importantly, the region has developed a set of policy tools that have proven to be effective during economic downturns,” he said.

The IDB forecasts regional GDP growth of 3.6 percent this year, compared to over four percent in 2011.

The Latin America and Caribbean region, which has a population of nearly 600 million, will enjoy a certain amount of protection because several countries, especially those that export commodities, have built up significant foreign reserves which will help them weather international financial turmoil.

“Unlike the past, most countries could implement effective fiscal stimulus packages to moderate the downturn and have accumulated valuable experience in managing anti-cyclical policies,” the IDB report says.

However, IDB president Luis Alberto Moreno reiterated at the plenary session on Monday that the region must remain vigilant.

“While it is true that the worst fears about a generalised recession seem to have passed, the crisis has not yet been overcome,” he said.

The United States has surprised analysts by performing better than expected; however, its unemployment rate is still very high and so are its financial obligations. China’s economy, on the other hand, is behaving more sluggishly than was customary, he said.

Moreno highlighted the important achievements of Latin American and Caribbean countries, such as lowering the unemployment rate to an average of below seven percent, and lifting over 50 million people out of poverty since 2002.

Increasing demand for commodities also augurs well for the nations of Latin America, he said.

On Monday Moreno confirmed that a contingency fund, designed to shield small countries in the event of crises or natural disasters, will be operational by the end of this year. The funds will be provided from the IDB’s own reserves.

The IDB and the Chinese government will also jointly create a one-billion dollar fund for investments in Latin America and the Caribbean.

Ending social inequality was the keynote of speeches by several speakers in Monday’s session.

“Democracy in our countries should be based not only on political rights but also on the challenge of providing a more just life, with greater opportunities for all citizens of the Americas,” said Organisation of American States (OAS) Secretary-General José Miguel Insulza.

Alicia Bárcena, the executive secretary of the Economic Commission for Latin America and the Caribbean (ECLAC), said “the time for equality” has arrived.

“Today those responsible for the region’s macroeconomy are concerned about inequality. That is a big change,” she said.

Another issue of concern to those present was the lack of public safety for ordinary citizens. Every day, on average, 350 murders are committed in the region, more than in any other part of the world. Latin American and Caribbean countries are home to eight percent of the world’s population, but one-third of all homicides are committed in this region.

“It is paradoxical that, just when we have made major advances, crime has reached levels far worse than during the so-called ‘lost decade'” of the 1980s, said Moreno, who announced a fund to facilitate regional cooperation on crime prevention.

Insecurity was also seen as part of the problem of social inequality, Latin America’s top challenge.

“The first weapon in the fight for security is education and the multiplying of a collective conscience,” said Uruguayan President José Mujica at the plenary session Monday.

“The second is intelligence, to build equity, not only for humanitarian reasons but for strategic self-interest. We cannot have a two-speed humanity,” he said.