No Settlement in Sight as Syria Violence Intensifies 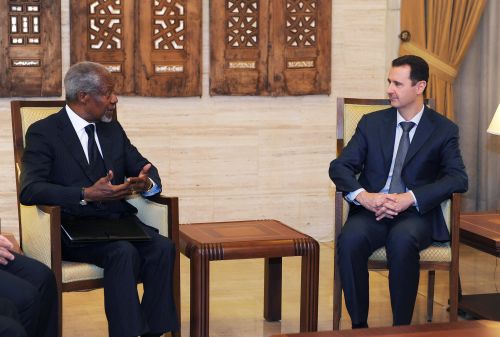 WASHINGTON, Mar 16 2012 (IPS) - As Western governments reexamine their options for ending the ongoing violence in Syria, Kofi Annan, U.N.-Arab League special envoy to Syria, briefed diplomats Friday at the U.N. Security Council, who remain divided over whether a negotiated ceasefire or direct intervention will be necessary, or even feasible.

Annan’s assessment comes amid renewed pro-government protests in Damascus and escalated fighting in Idlib, a city in northwest Syria, where 45 people were reportedly killed on Thursday as the Syrian military continues its latest offensive to quell opposition groups.

The U.N. estimates that over 7,500 people have been killed since uprisings began last year, while the World Food Programme announced recently that 1.4 million Syrians are now “food insecure”. On Thursday, U.S. State Department officials said that Syria will receive 12 million dollars in humanitarian aid from the U.S.

Russia and China, permanent members of the Security Council, remain adamantly opposed to any form of intervention – as their recent vetoes over resolutions condemning violence in Syria can attest – as multilateral and bilateral diplomatic negotiations attempt to forge a consensus.

Authors of a policy memo published by the Brookings Institute on Thursday, a research organisation based out of Washington, argue that Russia is unlikely to cooperate in a final diplomatic settlement.

“The Russian track record of support for (Syrian President Bashar) Assad should lead Washington to assume that any effective action will have to take place despite, not because of, Russian policy. Washington would also have to judge whether more provocative measures like a maritime blockade would lead to a direct Russian challenge,” the authors wrote.

“Bypassing Russia, however, is not without its dangers. It risks embroiling the United States and its allies in a costly and dangerous Cold War-style competition along the strategically important Syria fault-line, or worse. Russia could continue to arm and fund the regime, enabling Assad to defy international pressure indefinitely,” the memo went on to say.

“If the proposed transitional plan addresses those concerns and gives Russia an important role in guaranteeing its implementation, it conceivably could be brought on board,” the report stated.

“Russia and other countries must understand that, short of rapidly reviving a credible political track, only an intensifying military one will remain, with dire consequences for all,” the report went on to say.

According to some analysts, however, U.S. officials have used Russian intransigence over Syria as political cover in order to avoid intervening – a policy for which Republican members of Congress and presidential candidates in the U.S. have been highly critical.

“The Kremlin, however, may have several reasons to believe that the Obama Administration does not actually want to see the downfall of the Assad regime – and that Washington thus finds Russia’s opposition to Security Council resolutions against Syria, which the U.S. supports publicly, to be quite useful,” he wrote.

U.S. public opinion that is opposed to U.S.-led wars in the region, the historical failure of economic sanctions to coerce authoritarian regimes, and Israel’s fear of a highly destabilised political situation in Syria all point to the Barack Obama administration’s unwillingness to support a forceful removal of President Assad, according to Katz.

“For if the U.S. was serious about toppling the Assad regime, Russian observers have noted, it would assemble a ‘coalition of the willing’ to intervene in Syria without waiting for UN Security Council approval – just as it did in Kosovo during the Clinton Administration and Iraq during the Bush Administration,” Katz wrote.

With its naval base on Syria’s Mediterranean coast and weapons contracts with the Syrian military worth billions of dollars, Russia is a staunch ally of the Syrian government. Russian officials recently announced that they will continue to allow Syrian purchases of weapons.

A number of U.S. allies, most notably France and some of the Arab Gulf states, continue to call for Assad’s departure.

On Thursday, the six members of the Gulf Cooperation Council, including Saudi Arabia and Qatar, announced they would be closing their embassies in Syria.

Policymakers here have articulated a cautious approach that does not include plans for an intervention.

“Right now, we’re focused on getting humanitarian aid to those in need. We agreed to keep increasing the pressure on the regime – mobilising the international community, tightening sanctions, cutting the regime’s revenues, isolating it politically, diplomatically, and economically,” President Obama said in a press conference at the White House on Thursday with British Prime Minister David Cameron.

“(W)hen we see what’s happening on television, our natural instinct is to act. One of the things that I think both of us have learned in every one of these crises – including in Libya – is that it’s very important for us to make sure that we have thought through all of our actions before we take those steps,” Obama added.

According to a poll released by the Pew Research Center on Thursday, 64 percent of U.S. respondents are against a U.S. military intervention and 63 percent oppose sending weapons to anti-government groups fighting in Syria.

“In a way, if we were not in this phase of the election season…we might be moving very quickly toward military action in Syria,” Robert Kagan, a senior foreign policy fellow at the Brookings Institute, said in a conference on Thursday.

“I think the president does not think that the American people want another military intervention now, and he’s not going to do it before the election…(U.S.) capacity to create a safe zone if we wanted to and carve it out using airpower in Syria is something we could do, but I don’t think the president is in the frame to do it,” Kagan added.

“(U)ltimately, the way the international community mobilises itself, the signals we send, the degree to which we can facilitate a more peaceful transition or a soft landing, rather than a hard landing that results in civil war and, potentially, even more deaths – the people who are going to ultimately be most affected by those decisions are the people in Syria itself,” President Obama said at the end of his press conference on Thursday.