HAVANA, Mar 27 2012 (IPS) - On his three-day visit to Cuba, Pope Benedict XVI has so far struck a moderate tone, although he called on Catholics in this country to fight with the “weapons” of peace and understanding for an “open, renewed society.” 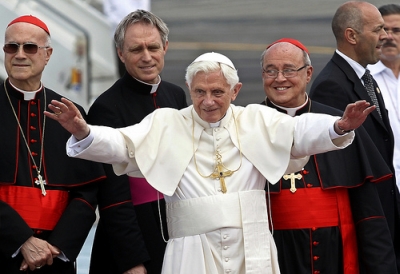 “I was expecting stronger words, since before he came he commented that the Marxist ideology no longer corresponds to reality,” an analyst who preferred to remain anonymous told IPS. “Maybe he’s saving it for his private meeting Tuesday with (President) Raúl Castro.”

Early Tuesday, he visited the sanctuary of Our Lady of Charity, where he prayed for Cuba’s patron saint “to guide the future of this beloved nation in the ways of justice, peace, freedom and reconciliation.”

At around noon, he flew from Santiago de Cuba, 860 km east of Havana, to the capital, to meet a few hours later with Castro and his family. One of the president’s daughters is sexologist Mariela Castro, a tenacious defender of sexual rights as human rights.

Some analysts say the pope’s three-day visit to Cuba could be the right time for a meeting with the two Castro brothers, Raúl and his older brother Fidel.

On his five-day visit to Cuba in 1998, John Paul II (1920-2005), Benedict’s predecessor, was warmly welcomed by then president Fidel Castro.

The elder Castro fell gravely ill in July 2006, and temporarily handed over power to his brother. When Fidel officially stepped down in February 2008, the first foreign dignitary to meet with Raúl was a representative of the Vatican.

Cardinal Tarcisio Bertone, currently the Vatican secretary of state, was in Havana at the time to attend the commemoration of the 10th anniversary of the visit by John Paul, which according to Benedict “was the inauguration of a new phase in the relationship in Cuba between Church and State, in a new spirit of cooperation and trust.”

But in his first remarks in Cuba, Benedict also stated that “many areas remain in which progress can and ought to be made, especially as regards the indispensable public contribution that religion is called on to make in the life of society.”

For his part, Raúl Castro mentioned, in his welcome speech in Santiago de Cuba Monday, that the U.S. economic blockade against Cuba has been stiffened 14 years after the first papal visit.

Yet in spite of this, he said, Cuba continues “changing everything that needs to be changed, in an effort to meet the highest aspirations of the Cuban people, who have freely engaged in transcendental decisions concerning our society, including those of economic and social nature that almost everywhere else in the world are under the control of narrow political and financial elites.”

He added that “We have faced hardships but we have never failed to fulfil our duty of sharing what we have with those less fortunate.”

Castro stated, for example, that Cuba has trained “tens of thousands of medical doctors from other countries” while helping “2.2 million low-income people to recover or improve their vision, and (helping) to teach 5.8 million people how to read and write.”

Along with some 250,000 people, according to official figures, the president attended the public mass celebrated by Benedict in Santiago de Cuba.

In his homily, the pope urged Catholics to “fight with the weapons of peace, forgiveness and understanding to build an open, renewed society, a better society more worthy of man”.

His statements did not satisfy those who had hoped for more pointed words about social issues like the family or human rights. “This pope is a traditional theologian, which is the reason for the lack of references to social questions like the ones John Paul II used to make,” Professor Enrique López Oliva told IPS.

At the mass in Santiago de Cuba, the city’s archbishop Dionisio García said the Cuban people “distrust all foreign interference in our affairs and…are committed to achieving, with hope and decision, a prosperous republic that includes everyone and where everyone participates.”

García also stated that “We are one people, but with different opinions regarding the way to move forward in the search for a better future.”

In Cuba’s “short history, this shared hope has been dampened” by a breakdown in dialogue and respect for others, among other problems, he added.

As president of the Cuban bishops’ conference, the archbishop must reflect the views of all of the bishops, López Oliva said.

“In his words, the search for a new consensus for a future that has a place for everyone is the predominant feature,” said the expert on the history of religion, who dismissed the idea that García’s words could cause tension in the relations between the Catholic Church and the government.

The Cuban Commission for Human Rights and National Reconciliation (CCDHRN), a dissident group, called on the authorities to identify and report the whereabouts of a man who was arrested after shouting “down with Communism” shortly before the pope held mass in Santiago de Cuba.

In the incident, captured on camera, the man was slapped in the face and hit over the head with a rolled-up banner, apparently by angry local people, as he was shielded and taken away by security.