Q&A: “Cuba’s Presence at OAS Summit Would Have Caused Serious Problems for Obama”

BOGOTÁ, Mar 14 2012 (IPS) - Colombian diplomat Clara Nieto says President Juan Manuel Santos managed to work out in his favour the boycott that was looming over the sixth Summit of the Americas, after several countries threatened to stay away if Cuba was not invited. 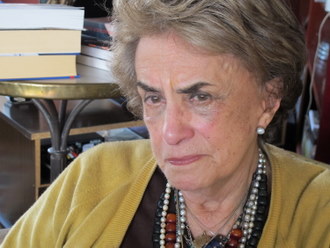 Clara Nieto at her home in Bogotá. Credit: Margarita Carrillo/IPS

U.S. President Barack Obama was “at the heart of the crisis,” Nieto says in this interview with IPS, because Cuba’s presence would have created “a serious internal problem for him, as he gears up for re-election.”

The summit will be held Apr. 9-15 in Colombia’s Caribbean beach resort city of Cartagena de Indias.

These hemispheric meetings have been creating touchy situations for the host countries. The summits were established by the United States “to resolve problems in the region, although the OAS (Organisation of American States) has been doing the same thing for over 50 years,” Nieto says in her book “Obama y la nueva izquierda Latinoamericana” (Obama and the New Latin American Left), published by the Ediciones B publishing house in December.

Nieto was a Colombian delegate to the United Nations in New York and a representative at the U.N. Educational, Scientific and Cultural Organisation (UNESCO) in Paris. She also served as ambassador to Cuba and as director of the UNESCO regional office in Havana.

In 1999, she published the book “Los amos de la guerra” (The Lords of War) – an in-depth look into how the Cuban revolution influenced U.S. policy towards Latin America.

Q: According to your analysis, what happened in Havana on Mar. 7, in Santos’s meeting with Presidents Raúl Castro and Hugo Chávez? A: Santos’s sudden trip to Havana, in the midst of the crisis that was looming over the sixth summit because of the Cuba question, was a master move. Santos went to discuss the issue directly with Raúl Castro and to see Venezuelan President Hugo Chávez, his “new best friend,” who was playing the leading role in the controversy.

Chávez, who is in Cuba recovering from the removal of a cancerous tumour, can help. The friendship between Santos and Chávez, and Chávez’s friendship with Fidel and Raúl Castro, were a fundamental factor in working out the crisis in Santos’s favour.

Another – equally important – factor is the policy of continent-wide coexistence followed by (the rightwing) Santos since he took office (in August 2010), which was welcomed throughout the region. In his conversation with Castro, Cuba agreed not to attend the summit, for the sake of regional coexistence.

Actually, it had never sought an invitation.

Colombia stopped being a problem country when Colombian Foreign Minister María Ángela Holguín went to Havana and said the question should be resolved by consensus.

And the members of ALBA (the Bolivarian Alliance for the Peoples of Our America), meeting in Caracas (on Feb. 4), did not include in their official declaration the issue brought up by Ecuadorean President Rafael Correa, who urged the members of the bloc to boycott the summit unless Cuba was included. Leaving that out of the declaration helped reduce the tension.

Obama was at the heart of the crisis. If Cuba were to attend, it would have created a serious internal problem for him, as he gears up for re-election.

But Cuba’s announcement put an end to the crisis. It was a victory for Santos.

Q: What is at stake regarding Cuba, in the sixth Summit of the Americas? A: At stake is the issue that Latin America, and especially the members of ALBA (Antigua and Barbuda, Bolivia, Cuba, Dominica, Ecuador, Nicaragua, Saint Vincent and the Grenadines, and Venezuela), wants to eliminate: Cuba’s exclusion from these events. The situation in Latin America has changed.

Most of them have now distanced themselves from Washington, and the members of ALBA proposed for the first time, ahead of the fifth summit in Trinidad and Tobago (Obama’s first meeting with the leaders of the region, in April 2009), boycotting the event if Cuba did not participate.

In the face of the imminent crisis, Obama (who took office in January 2009) asked then Brazilian President Luiz Inácio Lula da Silva for help. Lula managed to get ALBA to tone things down, and to agree to Cuba’s non-participation.

Later, the OAS General Assembly, meeting in Honduras (on Jun. 3, 2009), decided to lift its (47-year) suspension of Cuba, without conditions. But Cuba is not interested in returning to the organisation, which was described by former (Cuban) foreign minister Raúl Roa (1959-1974) as the “ministry of the empire’s colonies.”

Q: How important are these summits of the Americas, in the broader scenario of summits in the hemisphere? A: They are important – for the United Status. To show Latinos that they care about the region, something they don’t demonstrate very often. These summits were invented by (then President) Bill Clinton in 1994, but with the exclusion of Cuba, to deal with hemispheric issues, which is what the OAS was also created to do.

Analysts in the U.S. saw the initiative as linked to the courting of Latino voters, and even more so, to the cultivation of the powerful anti-Castro vote, with a view to Clinton’s reelection. It was obvious that the summit would be held in Miami, ruling out less controversial host cities. In Florida, a key electoral state, the anti-Castro vote is very powerful.

As we have seen now and at the summit in Trinidad and Tobago, these meetings cause big problems for the host country, because of the discrepancies between Latin America and Washington’s policies.

Correa said in February that the summits are nothing more than “protocol”, and that the leaders meeting there sign “pretty-sounding declarations, full of clichés and commonplaces that solve nothing.” And that’s what they have been.

Q: Your book Obama and the New Latin American Left clearly shows that the U.S. legislation surrounding the blockade of Cuba is a tremendous tangle, and that lifting it does not depend on the executive branch. Despite this, what has Obama done to address the suggestions that began to rain down on him as soon as he was elected in November 2008, to put relations with Cuba on a new footing? A: In Trinidad and Tobago, Obama in fact offered a dialogue on an equal basis with the region, and said he was prepared to have his administration engage with the Cuban government. None of that has happened. Lula, before completing (his second term, in January 2011), mentioned and lamented this, because the expectations for change had been so high.

Although one of the first measures taken by Obama was to lift restrictions against Cuba imposed by (George W.) Bush, that only benefited Cuban-Americans and their relatives on the island.

Q: In your book, you point out that in 2008, 55 percent of the Cuban community in Miami was in favour of an end to the blockade and 65 percent wanted Washington to re-establish relations with Havana. What is the real reason that Obama has not overhauled relations with Cuba? A: During Obama’s campaign and at the start of his government, important percentages of anti-Castro voters were calling for a change in policy towards Cuba, as was a broad movement of organisations and personalities from both (the Democratic and Republican) parties.

That activism soon waned. Nevertheless, the votes (of the anti-Castro community) are important, and both parties cultivate them. Another reality is that Latin America, as a whole, has not been a priority for Obama. Nor has it been for most previous administrations. And Cuba even less so.

And there is too much domestic opposition to restore relations, lift the embargo, hand over Guantánamo (back to Cuba), and for Obama to embark on that battle with the Republicans, who have been dedicated, since the beginning of his government, to making him fail.

Obama has much more important challenges than throwing himself into that struggle, which would not bring him – or his country, or his government – a thing.