CHIANG MAI, Thailand, Mar 10 2012 (IPS) - When he returned home after over two decades as a political exile, Aung Zaw, a prominent figure among Burma’s exiled media community, was served a slice of truth by the country’s notorious censorship board. 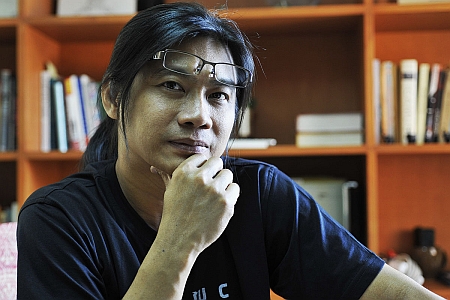 “They admitted the value of my publication,” said Aung Zaw, 43, editor of ‘The Irrawaddy’, of his meeting with the 50-member body which had denied readers in the Southeast Asian nation access to the English and Burmese editions since the early 1990s.

It was just one of the many encouraging experiences of Aung Zaw during his five-day visit in February. Another was freedom to travel and meet contacts and dissidents, including pro-democracy icon Aung San Suu Kyi, without being tailed by government spies.

The openness and sense of hope he felt in the Burma under its quasi-civilian government was in stark contrast to the climate of oppression that had gripped the country in 1988, the year he fled, hiding in remote villages, till he reached the Thai border.

In 1993, this trenchant critics of the military junta launched ‘The Irrawaddy’ on a shoestring budget to cover political events in Burma. The publication’s two-decade presence, first as a monthly and then as a website with daily updates, set the tone for the growth of the exiled media – a new phenomenon in Burmese journalism. It now has close to 20 media outlets in Norway, India, Bangladesh and Thailand.

“I don’t see ourselves as exiled media now, after the government lifted the restrictions to access our website inside Burma,” he said during an interview in his editorial office in Thailand’s northern city of Chiang Mai.

Q: You returned to Burma after 24 years in exile, during which time you set up ‘The Irrawaddy’ to expose the oppression by military regimes back home. Are the days of military dictatorships since the 1962 coup drawing to an end? A: Burma is changing, it is going through a transition period; it is at a crossroad, definitely. But if this change is not managed well, not done intelligently, in a more creative way, I am afraid we are going to lose this period of transition. That would be a shame. This is a golden opportunity for Burma.

Q: Among the places you visited was Naypidaw, the new administrative capital, to meet officials of President Thein Sein’s government. What did that visit feel like, since your publication was scathing in its coverage of the former junta’s plans to build this new seat of power? A: I got a call on my first morning in Rangoon from the government asking me to come to Naypidaw as soon as possible. I was expecting to make this journey at the end. So, I went immediately.

It was a funny journey (laughs) as I talked with the others in the vehicle about the number of stories we had written about this secret, jungle hideout, how much money was spent and the kinds of clandestine operations and deals struck by the military regime in the past. And then finally to see it – looked like a place in China; I felt it in the style of the buildings.

But I had a very warm, incredible reception with the officials from the president’s office. We had extensive talks, didn’t beat around the bush.

Q: Like what? A: Media laws in Burma, press freedom and the censorship board – when are they going to abolish it. How much freedom the media inside the country has and the changing media landscape since last year and will there be more openness.

Q: Does it mean you are planning to relocate The Irrawaddy to Burma? A: I did talk about our intentions to go back, at some point, and launch our publication at home. But is that possible? How much freedom will we have? These are questions of concern about the media space for us, because inside the country the cronies, the tycoons and family members of the military dominate and control the media, the many layers of publishing, even contents and editorial policies.

But I think there is potential for journalism to grow, for more professional journalism to take root. There are groups of people who are committed and very dedicated, very determined; they are relatively small. They need support and I see them as partners to reeducate journalists about what is good journalism, independent journalism, press freedom, and the role journalists have to achieve this.

Q: And will the government permit this possible flowering of a vibrant, independent media inside Burma? A: Actually, since last year, the government has relaxed media controls a lot. There is more space to publish and report. I also think the government wants to see a more professional media. They are very disappointed with the state of the media. They even asked at one point what we can do to help them with training.

Q: That would be something, given how you have been seen as an enemy by the military regimes all these years. Would the ministry of information and information minister Kyaw Hsan, your nemesis, be able to stomach it? A: (Laughs)… I only had a brief handshake with Kyaw Hsan, but I did meet the deputy minister (Soe Win) and he was very expressive as if he was meeting a long lost friend. He admitted being a big reader of the Irrawaddy. I was surprised (laughs).

Q: One of the problems exiles around the world face when they return to their country at peace after years of conflict or, in your case, decades of military oppression, are feelings of resentment by those who stayed back and felt the full force of domestic turmoil. You will face this, won’t you? A: Definitely, definitely. I think my first visit was a honeymoon. Even movie stars who had followed my work, seen me on our TV programmes, came and said hello to me in restaurants, as did other people I met in the markets, on the streets of Rangoon and even in the shops in Naypidaw. But the more exiles start making inroads in the professional fields, they will encounter resentment. It is natural.

Q: So is it time for exiles in professions such as journalism, health, education, finance to go back and deal with this reality check? A: I think it is time for a visit; get a feel for the change. But time will come for them to do more, to go back and help. And I think the government – there is a problem – also has to do something to welcome exiles back. They have to create incentives for people who left the country since 1960s to return and not be seen as people coming back to disrupt the society.