GUATEMALA CITY, Mar 19 2012 (IPS) - “To achieve peace, it is necessary for the truth to come out, and for the victims to receive reparations. And part of this is that cases of genocide and crimes against humanity against the Maya people must come to trial,” says Guatemalan indigenous leader Rosalina Tuyuc. 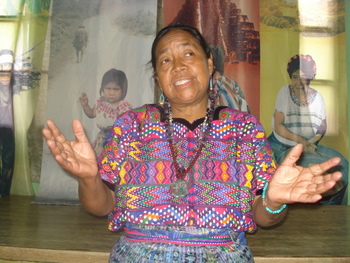 Tuyuc, a 55-year-old Kakchiquel Maya Indian, lost her father and her husband during the 1960-1996 armed conflict between the army and leftwing guerrillas, which left 250,000 – mainly rural indigenous – people dead and missing, according to the U.N.-sponsored Historical Clarification Commission.

The prominent human rights activist has been fighting for justice and peace as head of the National Coordinating Committee of Guatemalan Widows (CONAVIGUA), which groups survivors of the civil war, since 1988.

On May 10 in Tokyo she will become the first indigenous woman to receive the prestigious Niwano Peace Prize, which recognises Tuyuc’s “extraordinary and dogged work for peace,” according to the Japan-based Niwano Peace Foundation.

The committee that selects the recipients of the prize created in 1983 also stated in its press release that Tuyuc “is an inspiring example of how victims of discrimination, drawing on their faith, are empowered by working together, to defeat human rights violations and reverse the causes that have hurt them so deeply.”

Q: What do the legal proceedings against former dictator General Efraín Ríos Montt (1982-1983) on charges of genocide, which began on Jan. 26, mean for peace, reconciliation and justice in Guatemala? A: People have been waiting for these trials for over 20 years. This sets a historic legal precedent in the country. And it is a sign that he has something to testify and acknowledge, as head of state when the (1982) coup (that overthrew General Romeo Lucas García) took place.

What I hope for most is that, if all of the testimony provided (in the case) shows that he was politically and administratively responsible, in the name of the state, hope will be generated that in Guatemala it is possible to hold trials for the crime of genocide without having to turn to the international arena.

Q: Businesspersons, high-ranking military chiefs and prominent figures who it was once unthinkable that they would be tried are now being brought to trial. Do you think that Guatemala is on the road to overcoming impunity? A: Yes indeed, we’re heading in the direction of overcoming impunity. This moment should have occurred 15 or 18 years ago, because if minor crimes like theft come to trial, how can it be that there is no legal action for the lives of 200,000 people killed on the orders of agents of the state? This has to serve as a show of good will with respect to enforcing the law, to show the rest of the world that this is a civilised country.

Q: What major steps must the country take, along that path? A: The justice system has to demonstrate, at the national and international level, that the political will does exist here to achieve this. Then there is also the question of raising public awareness, so that people know what happened here and so that it will never happen again.

The armed forces should vindicate their image. I hope that General Otto Pérez Molina (president of Guatemala since Jan. 14), the highest authority in the country, will apologise for the abuses committed. But not only that – he should say where the 60,000 or 70,000 victims of forced disappearance are.

Providing information on their whereabouts is an act of moral and institutional reparations that the armed forces should make towards all victims.

Q: The peace accords marked a before and after in the history of the country, but they have also been criticised. In your view, what are the biggest accomplishments of the agreements? A: The approval of laws with a social focus, such as the creation of the land fund, the mixed private-public Rural Development Bank, and laws aimed at improving conditions for women and combating domestic violence and all forms of discrimination.

We now have institutions addressing indigenous issues, such as the Presidential Commission against Discrimination, the office of the Defender of Indigenous Women, and a Maya media outlet. If it hadn’t been for the peace accords, this probably would not have happened.

Q: The issue of agriculture is still an Achilles’ heel for the full development of indigenous people in Guatemala. Do you see changes on the horizon? A: The agricultural question was always the cause and origin of the armed conflict, and still gives rise to a great deal of social conflict. I think the day the state understands that indigenous people depend on Mother Earth and her resources, there will be changes.

Q: What do you feel about the president, after the first two months of his four-year term: fear or hope? A: The biggest fear is the racist attitude of the new government. The second message is that all investment in fighting hunger will be based on megaprojects, and that is a very big concern among social organisations, because once again we’re not seeing changes, just a continuation of what past governments have done.

The market aspect is always given priority, without seeing the damages that this causes to Mother Earth, the water and forests, which are the most essential things.

Q: What does it mean to receive the Niwano Peace Prize? A: It is the biggest gift that I have received for the grain of rice I have contributed to the social struggles for all of the changes that we are hoping for in our Guatemala.

I also see it as homage to those who were my inspiration, the community leaders who fought for the land and natural resources before the 1980s and whose hopes were sadly cut short along the way.

It is difficult to achieve peace in a society like ours, but making the attempt to bring harmony between human society and nature is worth it.