UNITED NATIONS, Mar 14 2012 (IPS) - Against the backdrop of a politically-waffling, nuclear-armed North Korea as its unpredictable neighbour, South Korea is hosting a nuclear security summit later this month to be attended by over 40 heads of state and government. 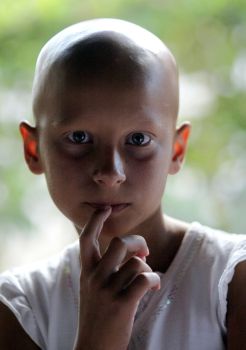 Ana Pancenko, one of the many Ukrainian children affected by the Chernobyl disaster who received medical treatment in Cuba. Credit: José Luis Baños/IPS

As Japan still struggles to cope with its disastrous nuclear accident in Fukushima last year, the Seoul Summit will focus on specific guidelines for nuclear safety – and also measures to prevent nuclear terrorism.

U.N. Secretary-General Ban Ki-moon, a former foreign minister of South Korea, said he was looking forward to the summit, scheduled to take place in the Korean capital Mar. 26-27.

Dr. M.V. Ramana, a physicist at the Nuclear Futures Laboratory and the Programme on Science and Global Security at Princeton University, told IPS, “I hope this summit manages to focus some attention on the urgent issues of nuclear safety and security. Unfortunately, I don’t think we have any grounds for optimism.”

With a few honourable exceptions, he said, the response of most governments and heads of state to the Fukushima nuclear accident following an earthquake and tsunami in March last year has been the continued pursuit of business as usual in their plans for nuclear construction and operation, with no real reflection about the broader implications of the accidents.

“The general view promulgated by nuclear establishments, and reproduced by governments is that while Japan might have had an accident, their own nuclear plants are fully immune to accidents,” he said.

“This view is not conducive to either safety or security,” said Dr. Ramana, author of “The Power of Promise: Examining Nuclear Energy in India” and a member of the International Panel on Fissile Materials and the Science and Security Board of the Bulletin of the Atomic Scientists.

The first nuclear security summit was held in Washington DC in 2010, while the United Nations hosted a high-level meeting of world leaders to discuss the same subject in September 2011.

The second security summit in Seoul will take place amidst last month’s announcement by North Korea that it is willing to stop nuclear tests, uranium enrichment and long-range missile launches in exchange for U.S. food aid.

But Dr. Rebecca Johnson, vice chair of the International Campaign to Abolish Nuclear Weapons (ICAN), is sceptical of the North Korean assurance.

“This is the third time in 20 years that the despotic North Korean leadership has offered nuclear restraint and access for IAEA (International Atomic Energy Agency) inspectors in return for food,” she told IPS.

So while all should welcome the chance that has opened up, the United States and other participants (China, Japan, Russia and North and South Korea) in the Six-Party Talks are understandably cautious not to claim this as a major breakthrough.

The potential wild card this time is Kim Jong-Un, successor to his father and grandfather but an unknown political quantity, she added.

Does he have the will and authority to begin a process of change in North Korea, or is he just emulating his father in dangling inspections in order to relieve domestic pressure in his hungry, underdeveloped country? asked Johnson, who is also executive director and co-founder of the Acronym Institute for Disarmament Diplomacy.

She said North Korea is undergoing an inevitable transition following the sudden death of Kim Jong-Il.

“That offers potential for positive change or destabilisation. Only time will tell if this is the beginning of the end for North Korea’s provocative nuclear programme, with its exhibitionistic nuclear tests and displays of weapons-grade plutonium,” she said.

If so, Johnson said, then Kim Jong-un’s offer will prove to be an important first step, provided that Washington and Seoul can respond constructively.

“Even so, it is likely that this will be a wary courtship, with many missteps and jumps in the wrong direction, but with the hope that North Korea can be encouraged to keep moving towards de- nuclearisation and disarmament,” she said.

Meanwhile, studies have shown that the primary drivers for states’ leaders to acquire or renounce (or refrain from) nuclear weapons are domestic politics, even if the rhetoric is couched in security justifications.

Such is the voodoo power assigned to nuclear weapons for power projection and deterrence that insecure leaders will seek to develop or hang on to them regardless of the costs, said Johnson.

“For them, it’s about nuclear weapons as symbols of power even if their use would be politically or militarily suicidal,” she said.

Still, Johnson said South Korea also needs to make a reassuring gesture of its own now – one that would come as a huge relief to the farmers and fishing communities of Jeju Island who are desperately trying to prevent their diving grounds and the Gureombi of the iconic Haenyo women shellfish divers from being dynamited to build a new naval base for U.S. Aegis destroyers equipped with missile defences against possible attack from North Korea.

She said construction on the Gangjeong naval base should be halted immediately.

There’s no point in irrevocably damaging Jeju’s marine environment, and the South Korean government can present their own restraint as a confidence-building measure to encourage Kim Jong-Un to take further constructive steps, said Johnson.