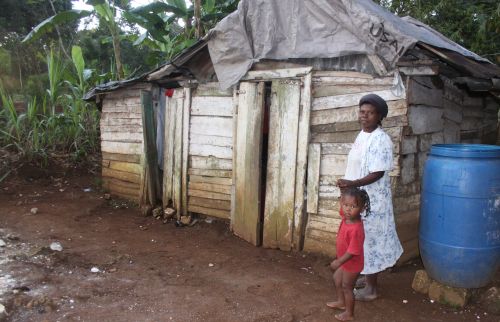 HILLS ABOVE LÉOGÂNE, Haiti, Mar 15 2012 (IPS) - Almost half of the emergency shelters distributed by the British organisation Tearfund in the mountains above Léogâne remain uninhabited six months after they were built.

A two-month investigation by the Haiti Grassroots Watch (HGW) investigative journalism partnership in the hamlets of Fonds d’Oies and Cormiers, the tenth and twelfth sections of Léogâne, found that 34 of the 84 families who received temporary houses didn’t live in them, and that 11 families got two houses from two different humanitarian organisations.

If these 34 houses – built for 3,000 dollars each, according to Tearfund – are sitting empty or, worse, are up for rent, that means at least 102,000 dollars was wasted while tens of neighbouring families are still living in tents or makeshift huts.

The 50-year-old farmer, her husband and six children used to live in a four-room concrete home that was destroyed during the earthquake, whose epicentre lies about 25 kilometres away. Now she and her family cram into a shack made of wood, cloth and plastic.

How many other Cérivals or Gérésols are there across Haiti?

Are people in the Léogâne area, and indeed, are Haitians in general somehow predisposed to nepotism, to lying, and to tricking people and organisations who are attempting to assist them?

According to sociologist and economist Camille Chalmers, the presence of hundreds, if not thousands, of organisations and agencies doing humanitarian work, sometimes with methodology that is inappropriate – or worse – is not without its negative consequences.

They are having the tendency of "creating a vicious circle of humanitarianism and of assistance, where people have the mentality of being dependent on hand-outs. This can be very, very negative… in the medium and the long run," Chalmers told HGW in an interview in October 2010.

In addition to those negative effects, the Tearfund T-Shelter investigation raises other questions:

If the sample studied by the AKJ journalists offers even a hint at the eventual errors and corruption at other sites, what does that mean about the 110,000 emergency shelters sprinkled across the country?

Should one assume that over 44,000 of them have been given to people who don’t really need them, when more than 450,000 of their compatriots still live in tents?

Was building T-Shelters, as opposed to repairing homes, or other possible solutions, the best way to spend 500 million dollars?


“Life is not too rosy for me… I need to find a home because (when it rains), the torrents make our lives miserable,” she added.

The Christian organisation Tearfund (The Evangelical Alliance Relief Fund), which works in about 50 countries around the world, arrived in these mountain hamlets between Léogâne and Jacmel after the earthquake. In addition to other work, Tearfund built 249 “Transitional Shelters” or “T-Shelters”.

“The houses respect the norms (established for post-disaster housing),” Kristie van de Wetering, Tearfund’s earthquake programme director, told HGW. “And one of the things we did was to look for extra money so that we could implicate the beneficiaries and the community in the project.”

The 18-square-metre, two-room houses are built of plywood and two-by- fours on a cement base, with a tin roof. The price per home is about 3,000 dollars, according to the organisation.

In total, over the past two years, humanitarian organisations have built about 110,000 T-Shelters in the earthquake-struck zones, for a total cost of about 500 million dollars.

The total number of families in need of housing following the quake topped 300,000. To get a T-Shelter, a family had to have proof it owned land or had a long-term lease. Over two-thirds of the post-quake refugee families – some 200,000 families – were renters, meaning they were not eligible for the structures.

The focus on T-Shelters as a solution was not without controversy. [See also Abandoned like a stray dog and What is the plan for Haiti’s homeless?]

At the Tombe Gâteau marketplace along the Jacmel road, two houses sit in the same yard, just a few steps from the Bangladeshi organisation BRAC, who built the one of concrete. The wooden one came from Tearfund.

Everyone in the neighbourhood says both houses belong to the same person, Cevemoir Charles.

A “For Lease” sign sits on top of the BRAC house.

When asked, Charles lashes out and moves away quickly, grumbling as he goes: “These houses don’t belong to me. They belong to my wife.”

Charles’s case is not unique. Ask Résilia Pierre, a mother of three children who lives with her husband and two other people in one of the two houses she received, the one from BRAC. She is also seeking a tenant.

“I live in this shelter and the other one is empty,” she admitted, as if it were perfectly normal. “Once in a while I sweep it out and do a little cleaning.”

Tearfund’s local liaison officer swears there are no duplicates.

“We take into account if someone has already received a shelter from another NGO (non-governmental organisation)”, Booz Serhum said. “That is one of the criteria we want to respect everywhere, because that assures a fair distribution.”

His supervisor, van de Wetering, seconded Serhum, adding, “One of the fundamental elements of our programme is coordination with other organisations.”

But what kind of coordination? In the two communal sections sampled, the coordination was, at the very least, inefficient. It didn’t prevent over 10 duplications in the same region, or the fact that many others got shelters without needing them since they live somewhere else or are renting them out.

What explains the empty T-Shelters just down the road from families still living in tents or damaged homes? Journalists found apparent lack of coordination, weaknesses in the method used to pick beneficiaries, as well as lies and errors.

Local officials were the first to recognise the disastrous situation.

“Victims complain that people who don’t need shelters got shelters, while others who were more vulnerable and more in need, didn’t get anything,” said Laurore Joseph Jorés, a member of the Cormiers Communal Section Administrative Council (Conseil d’administration de la section communale or CASEC).

“A lot of people who lost their homes thought the CASECs could help them get a shelter,” he added.

Innocent Adam, coordinator for the Fond d’Oies CASEC, agreed with his colleague but noted that local authorities are powerless.

“We can’t do anything. We are not responsible,” he said. “Our task was to simply oversee issues related to land-ownership and land titles.”

If local officials didn’t choose the beneficiaries, who did? Tearfund says the community committees set up with Tearfund’s assistance after the earthquake had final say, but the committees said Tearfund decided everything.

Who really chose? What both sides agree on is that Tearfund conducted a field study to identify the victims who were truly “vulnerable”.

“We focused on the person’s revenue, their living conditions, the number of children for whom they were responsible, their health situation, etc.,” Serhum said, explaining that community committees seconded the work.

While the committees admit to having worked with Tearfund, committee members deny that they had the final word.

“The committee’s job was to look at the list,” van der Wetering countered. “They knew the quantity of shelters available for their community. The committee chose beneficiaries from the list.”

But according to Sanon Dumas, member of the Fond d’Oies committee, the group was only responsible for assuring that the construction was carried out correctly, and then reporting to Tearfund.

However, he admitted: “If we did make a few choices, it was to help Tearfund pick from the list of those who had already been registered and were in the computer database.”

Dumas’s mother got a T-Shelter.

As of early March, it was still empty.

Some feel that Tearfund was tricked on many occasions.

“The initial field study was done by people who didn’t know anything about the local context,” committee member Gérésol noted. “There were people who got a shelter by shady methods or by lying.”

Gérésol himself has two T-Shelters from two different organisations: Tearfund and the Swiss Red Cross.

Not knowing the region, the researchers were fooled by people who pretended that abandoned, destroyed homes belonged to them. Tearfund – which also built 27 temporary schools, a dozen wells, and carried out other programmes in the region – doesn’t reject the possibility.

“It’s quite possible that some people were not honest, and they said that had no home, or that this or that home belonged to them or to their family. That probably happened,” Serhum said.

“Someone might tell you that their home was destroyed, but later you learn that what they showed you was their kitchen (often a separate hut or semi-walled building), not their home.”

Nepotism and favouritism also appear to have played a role in the distribution of at least some of the shelters.

HGW journalists noted that in the sample communal sections, most of the families who got shelters had some kind of link to the committee members. For example, about 10 families living near Sanon Dumas have shelters, while potential beneficiaries only a few kilometres away still live in damaged houses.

Berline Cérival, from Grand Bois, well understands the advantages of a friendship.

“I wasn’t counted by the researchers, so I went to see Partisan (a committee member),” she said. “He contacted an engineer at Tearfund to organise the shelter for me, and here I am today!”

*Haiti Grassroots Watch is a partnership of AlterPresse, the Society of the Animation of Social Communication (SAKS), the Network of Women Community Radio Broadcasters (REFRAKA), community radio stations and students from the State University’s Faculty of Human Sciences.

This report made possible with the support of the Fund for Investigative Journalism in Haiti.