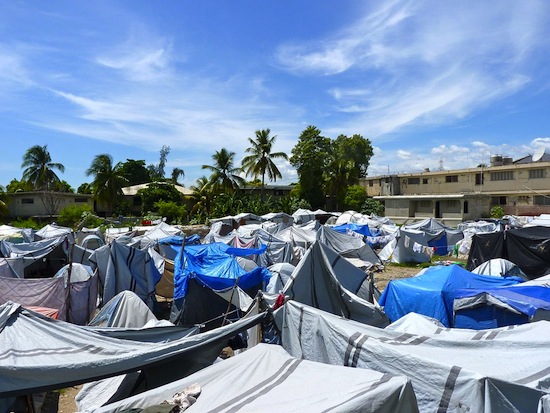 A lack of long-term housing plans in Haiti's post-earthquake tent cities made the refugees even more vulnerable to natural disasters. Credit: Ansel Herz/IPS

GENEVA, Mar 7 2012 (IPS) - As donors struggle to meet their aid commitments, and the number of people around the world in need of direct humanitarian and development assistance skyrockets, many experts and activists are asking the tough question: are donors being effective? A report published today by the Spanish non-governmental organisation DARA on donor effectiveness highlighted some of the biggest obstacles to aid reaching target populations, including insufficient consideration of women’s needs, politicisation of aid and lack of long-term plans for humanitarian assistance. “If donors want to make sure that money gets to the people, they must analyse the different needs of women and men,” Philip Tamminga, coordinator of DARA’s 2011 Humanitarian Response Index (HRI), told IPS. For example, after the 2010 floods in Pakistan, humanitarian agencies distributed inappropriate hygiene kits to women, and failed to address cultural norms that would have allowed women to be adequately cared for by men. Similarly, Tamminga explained, much of the gender-based violence that shook the post-earthquake tent cities in Haiti’s Port-au-Prince and outlying areas could have been avoided if women’s security at latrines and water and sanitation installations had been taken into consideration when building the refugee camps. Tamminga believes much of aid inefficacy is directly linked to a lack of preparedness for dealing with natural disasters and armed conflicts.

“In previous years four hurricanes hit Haiti,” he said. “Had donors focused on prevention at that time, Haitian authorities would have responded better to the 2010 earthquake and donors could have applied lessons learned there to (subsequent) earthquakes in Pakistan, Iran and Turkey. Donors have to make sure that the recovery stage takes long term solutions into consideration.” In most major disasters, donors and humanitarians work together to provide emergency shelter in transition to longer-term housing. In Haiti, however, there was no long-term housing strategy in place after the earthquake; as a result, when the hurricane hit, scores of people still languishing in temporary shelters were extremely vulnerable to the catastrophic impact of the winds. Another example of the dire consequences of insufficient preparation is the on-going food crisis in the Horn of Africa. Though the whole international community knew that a severe famine was brewing in the region, donor governments failed to scale up their funding, which resulted in the tragedy of over 100,000 preventable deaths. “There is no evidence that donor governments are changing attitudes in their transition from emergency to recovery and to the preparation of risk reduction. Emergency and long-term development are still considered as separate programmes,” Tamminga lamented. The situation is compounded by the increasingly politicised nature of aid. “When donors or host governments start to apply political considerations about to whom, how and when aid is distributed, the situation becomes very (precarious),” Tamminga stressed. “We have witnessed this in cases like Palestine, Somalia, Sudan or Colombia.” The most recent example is Syria, where the regime has failed to acknowledge the humanitarian crisis on its soil and refuses to act in accordance with the Geneva Conventions, which clearly state that besieged populations on all sides of a conflict have the right to humanitarian assistance. “We are very concerned when donor governments start to impose their agenda and tell humanitarian organisations where they can work,” Tamminga said. “In Somalia there are serious restrictions; Al Shabaab bear a grave responsibility for that.” He added, though, that countries like the United States, Canada and some European countries, bound by anti- terrorism legislations, also have a part to play. “They forbid humanitarian organisations from working with or having contact with those labelled “terrorists.” Yet humanitarian organisations are neutral, impartial and independent and they must be allowed to work with all parties,” he added. In 2011, only 62 percent of the U.N.’s appeal for 8.9 billion dollars to assist some 50 million people facing crises was met, resulting in huge gaps in the humanitarian response.

The HRI looked at 19 of the world’s biggest donors and ranked Norway, Denmark, Sweden, Ireland and the Netherlands as the ‘best’ donors, with the U.S. coming in 17th and Italy receiving the lowest rank on the index. While traditional donor governments still provide 85 percent of global aid, 40 percent of the funds channelled into relief work in Haiti came from private sources and new government donors like Brazil, Venezuela and Cuba. In fact, DARA has tracked a sustained shift from traditional donors to new, emerging funders. “We want to encourage good practices with these new donors,” Tamminga told IPS. “If not for new donors like Qatar, the United Arab Emirates (UAE) and Saudi Arabia, Yemen, for example, would receive little aid. And many of these Gulf donors are becoming much more aware of international standards – Qatar and the UAE are good examples.” He stressed the importance of new and old players working together and teaching each other about cultural norms and the needs of specific populations. The private sector also has a lot to offer in terms of innovation, quick responses and utilising existing networks and infrastructure. In Haiti, cell phones proved to be a useful tool for disseminating messages on cholera prevention, when an outbreak erupted after the earthquake. “If the private sector understands humanitarian principles and good practices – like standards on the donation of drugs, that forbid sending medicines that are close to expiration – then it can contribute to using aid appropriately and effectively,” Tamminga concluded.