JOHANNESBURG, Mar 28 2012 (IPS) - South Africa’s membership of the bloc of leading emerging economies and its unique position in Africa heralded the country’s role as a gateway into the African continent. However, trade experts question whether it can live up to this position as investors begin to increasingly look towards other African markets. 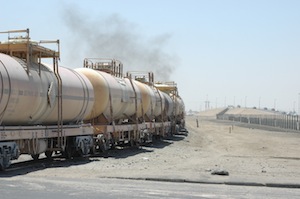 In 2003 South Africa became part of the IBSA grouping (India, Brazil and South Africa), and seven years later it joined the bloc of countries now known as BRICS (Brazil, Russia, India, China and South Africa). Economists have predicted that the dynamic growth of the BRICS countries will bring about a shift in economic power toward the developing world.

And South Africa, as the most developed country in Africa, offers the infrastructure and services to unlock the region’s frontiers, they say.

With the International Monetary Fund forecasting 2012 growth figures averaging around six percent for sub-Saharan Africa – and with countries like Angola raking in GDP growth of almost double that – the continent is touted as the investment destination of the decade.

Africa’s population of just over one billion pales in comparison with Asia’s 3.8 billion, but the African market is largely untapped and most countries find themselves on a firm growth trajectory.

South Africa, therefore, should be the logical first port of call for investors. But regional trade experts gathered at a mid-March forum on South Africa’s Trade Policy, organised by the South African Institute for International Affairs (SAIIA), questioned the gateway concept.

“Yes, South Africa represents the continent in the G20 (bloc of developing nations), but that is not the point,” said Peter Draper, senior research fellow with SAIIA. “If a gateway is supposed to be a transmission belt between global and regional markets and production facilities, the question should be whether South Africa can use its physical and material infrastructure to fulfil a connecting function between Africa and the rest of the world.”

The answer to this question is not an unequivocal yes. “The need to get minerals down from the central African plateau to the ports, using South Africa’s good infrastructure, has boosted it as a transport hub,” said Draper. “But South Africa, geographically speaking, is not optimally located, and some of the traditional advantages are rapidly eroding.”

Places like South Africa’s economic province of Gauteng or its coastal city of Cape Town are no longer necessarily the preferred outposts from which multinationals conquer the continent.

The reason for this is not just because South Africa is relatively far from African markets.

“It raises the question: to what extent do foreign companies still use South Africa as a conduit into the continent?” said Draper, who said heavily populated centres of West Africa – and not South Africa – will drive future growth on the continent.

According to Dianna Games, chief executive officer of consulting firm Africa @ Work, South Africa used the gateway concept to position itself globally. “But this idea of South Africa as a single gateway into the continent is not necessarily shared by the rest of Africa.

“As foreign investors are disaggregating African regions and countries, South Africa is losing traction on a whole host of issues. This does not mean that other African countries are necessarily in a better position, but the reality is that these markets are moving up, while South Africa is sliding.”

She added that South Africa, situated at a remote tip of the continent, should deploy progressive strategies to keep attracting investment.

“Investors go directly to other African markets, because they can. The South African government is not as worried about the decline of this competitive edge as it should be,” she said.

Games said the South African port of Durban was one of the most expensive in the world. Though, with the rehabilitation of the East and West Coasts of Africa, some of it by resource companies needing to find more convenient export routes, trade patterns were starting to change in the region. In time, it is likely that Durban will be just one more port handling regional trade, rather than the main one.

“Investors are also worried about current government policies, including a decline in economic and press freedom. South Africa is losing its status as an exception in Africa, and is viewed by some to be on a downward trajectory, with some other economies rapidly improving. Meanwhile, the actions of petty bureaucrats have affected the relations between South Africa and other African countries, which generally are not managed well.”

In this vacuum, China and India have long since bolstered bilateral relations with most African countries. And Portuguese-speaking Africa, especially Angola, is Brazil’s well-established gateway into the continent.

“With 240 Australian listed mining companies, among others, and over 800 oil and gas outfits operating in Africa, the gateway concept is declining. Many of these companies operate from their host countries and go direct to the resources as required, rather than setting up headquarters in Africa…We focus heavily on BRICS and not on African countries. But BRICS might fizzle out,” Games said.

“We inherited the role of a gateway, it wasn’t necessarily a policy objective,” commented one South African trade official. “And we are certainly not a gatekeeper, which is the connotation that goes with the idea of a gateway.”

But according to the official, it is not really relevant whether South Africa is losing its gateway status. “We would welcome investments being routed directly to African countries. That way our collective growth trajectory is increasing. It means our policies are working. It means that the continent is growing and becoming more competitive. We need a growing Africa for South Africa’s own future.”