LIMA, Mar 5 2012 (IPS) - Brazil is keen to move ahead quickly with the construction of hydropower plants in neighbouring countries to supply its demand for electricity. But Peru is still stalling on an agreement between the two countries, due to a number of conflicting interests and demands. 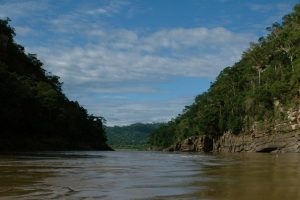 Pakitzapango Gorge on the Ene river, homeland of the Ashaninka people and the site of a projected new dam. Credit: Courtesy of CARE

After seven months in office, Peruvian President Ollanta Humala has not yet decided what to do with the energy agreement signed by his predecessor Alan García (2006-2011) in June 2010 with former Brazilian president Luiz Inácio Lula da Silva (2003-2010), to great fanfare.

Furthermore, the agreement has yet to be ratified by the Peruvian Congress.

Local resistance in the area where five hydroelectric plants are to be built under the agreement is one reason why the Humala administration has had to delay a final decision on the agreement, according to observers.

Projects like mega hydropower dams raise hackles in Peruvian society, already on edge because of anti-mining protests, most recently against the Conga gold mine in the northern region of Cajamarca which led to the declaration of a state of emergency and a cabinet reshuffle in late 2011.

The protestors’ actions have not been limited to marches and strikes.

On Feb. 16, leaders of the Central Ashaninka del Río Ene (CARE), a federation representing indigenous Ashaninka communities in the Ene river valley, in Peru’s central jungle region, presented an appeal to the High Court in Lima for an injunction against Congress and the Foreign Ministry, demanding the suspension of the energy agreement with Brazil.

David Velazco, a lawyer at the Fundación Ecuménica para el Desarrollo y la Paz (FEDEPAZ), a human rights organisation, told IPS the injunction seeks to protect the constitutional rights of indigenous people, such as consultations to obtain their free, prior and informed consent for development projects in their territories, as stipulated by law.

Leaders of the Ashaninka people, who live in the Ene river valley in the central department (province) of Junín, complain that their territory would be adversely affected by the Paquitzapango hydropower project, one of five planned under the agreement with Brazil.

“The new government has not reflected deeply and seriously on the pros and cons of the agreement for the country,” César Gamboa, an environmental lawyer and head of policies for Law, Environment and Natural Resources (DAR), a civil society organisation, told IPS.

In his election campaign, “Humala criticised (Garcías’s) government for exporting natural gas from the Camisea reserves (in the southeastern province of Cuzco) and for failing to base his decisions on sound studies (of the volume of proven gas reserves) – but now he is making the same mistakes,” Gamboa said.

The expert said the authorities do not have a clear idea of how much of the approximately 6,000 megawatt capacity of the planned hydropower plants to be built in Peru’s Amazon jungle will be needed for Peru’s own consumption.

“There is no energy planning process, and therefore no instruments to decide the best option, in environmental, social and economic terms, to supply our energy demands,” he said.

Juan Pari, a lawmaker belonging to the governing Gana Perú (Peru Wins – GP) alliance, told IPS that the energy deal with Brazil is still being assessed within the party.

Since October 2011, the bill for the ratification of the energy agreement has been awaiting debate by the Foreign Relations Commission. Jazmina Sánchez, the commission’s technical secretary, said a date for the debate has not yet been set.

“We regard this as an important issue for both countries, and we support an energy cooperation agreement, but environmental regulations must also be respected and the local population should be engaged in dialogue. This is not something that can be rushed,” said Pari.

The president of Congress, Daniel Abugattás, expressed doubt that the agreement would enter into force. He said a thorough technical evaluation of its impacts has not been carried out.

But opinions are divided, and other legislators and government officials think the authorities should press forward on the agreement, in order to promote investment.

Meanwhile, Brazil has clear projections of its energy needs as well as a well-developed strategy to meet them.

The newspaper Folha de Sao Paulo said Feb. 14 that the government of Brazilian President Dilma Rousseff urgently needs to seal the deals to build hydroelectric plants in neighbouring countries, because Brazil’s domestic dam-building programme is being held up due to resistance from local people.

There is an enormous difference between Brazil’s energy requirements and those of Peru, which may explain the different tempos of the two governments with respect to the agreement, experts say.

Peru, which has a population of just under 30 million, has a current capacity demand for 5,000 MW which is growing at an annual maximum of 500 MW. At this rate, demand in 2020 will not be more than double what it is now, according to former minister of energy and mines Carlos Herrera.

But in Brazil, a country of nearly 200 million people, the official projection is that by 2020 domestic power consumption will be 730,073 gigawatt-hours (GWh) annually, requiring a total installed capacity of over 100,000 MW, at an average annual growth rate of 4.9 percent.

Annual consumption per person in Brazil is expected to rise from 2.4 megawatt-hours (MWh) in 2011 to 3.5 MWh in 2020. To meet this demand, Brazil needs to increase installed capacity by 56 percent.

According to Folha de Sao Paulo, the Brazilian government needs to import between 70 and 80 percent of the power produced by Peru, Bolivia, Colombia, Guyana, Suriname and Venezuela. Apart from satisfying its demand, it is cheaper to buy energy from these countries.

Daniel Falcón, head of the non-renewable energy resources division of Brazil’s Foreign Ministry, told IPS that South American energy integration is a positive thing because among them, the countries of the region have “enough energy to meet total demand.”

But they have different histories, energy mixes and resources.

“Some have the funds, but lack capital and technology; in other cases it is the reverse; and Brazil has plenty of everything,” said Falcón.

In the view of Gamboa and Pari in Peru, Humala needs to reach a clear position before Rousseff’s visit to Lima this year, for which a firm date has not yet been set.

Falcón recognised that the energy projects spearheaded by Brazil in neighbouring countries must respect “the laws of each nation and be subject to its regulations.” But above these laws and rules, he said, are “the international treaties or laws that guide these activities.”

Officials at Peru’s Foreign Ministry and Ministry of Energy and Mines were not available to answer IPS’s questions about the status of the agreement with Brazil, according to their press offices.

In the view of former minister Herrera, the government must take two things into account in its assessment: it cannot stubbornly insist that the agreement will go ahead regardless, as it did with the Conga gold mine project; and it must protect the state’s interests.

“Brazil knows exactly what it wants, and if we make a mistake it could cost us dearly,” said Herrera, who pointed out that Rousseff has the advantage over Humala when dealing with energy issues because she served as former president Lula’s energy minister, and is well aware of what is at stake.

* With reporting by Mario Osava in Rio de Janeiro.