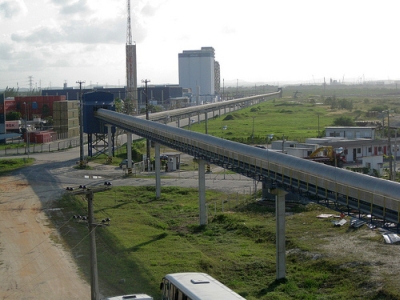 The director of the Brazil-China chamber of commerce and industry (CCIBC), Kevin Tang, said this was “a huge leap” from 2000, when trade between the two countries amounted to just 2.5 billion dollars.

The Asian giant has also begun to invest heavily in Brazil, as it has in Chile and other countries of Latin America as well.

A study by the Brazilian Trade and Investment Promotion Agency (APEX-Brasil) points to even higher levels of investment than the official statistics show.

According to Brazil’s central bank, foreign direct investment from China totalled three billion dollars between 2005 and 2011. But unofficial figures compiled by APEX-Brasil indicate that investment in productive sectors amounted to nearly 17 billion dollars between 2009 and 2011, counting funds channelled through Hong Kong and other indirect routes.

With respect to both imports and investment, China is driven by the same interest that has led it to increase its presence in other regions: with a population of 1.3 billion people – the world’s largest – it has a growing hunger for raw materials and is seeking to guarantee basic supplies while minimising dependence on imports from any single country.

The study by APEX-Brasil, “The Internationalisation of the Chinese Economy; the Scale of Direct Investment”, says that Chinese investment, which “began to intensify in the post-global financial crisis period,” has been concentrated in natural resource-intensive industries like oil and steel.

The global financial crisis that broke out in 2008 did not curtail that process. On the contrary, “it could be suggested that the crisis has created an opportunity to acquire depreciated assets,” says the study, which was published this month.

Most of China’s investments in Brazil “are aimed at establishing export supplies to China of commodities of which we are large producers, such as soy, iron ore and oil,” Rodrigo Branco, an economist at the Centre for Foreign Trade Studies Foundation (FUNCEX), told IPS.

China’s strategy to obtain the commodities it needs is four-pronged, Branco said. In the first place, it involves signing contracts and terms of commitment with Brazilian suppliers, to lock in specific quantities of exports within certain timeframes.

In second place is the creation of Chinese-Brazilian joint ventures to produce certain goods; third, the purchase of or merger with Brazilian firms by Chinese companies; and fourth, the acquisition of property and land, to produce mainly agricultural commodities.

“The chief focus of (China’s) investment in Brazil is still to obtain regular supplies of commodities, to cover growing demand,” Branco said.

Besides raw materials, there are other areas of interest to China, such as the automobile industry. Chinese carmakers are building factories in Brazil to help supply this country’s fast-growing market for cars.

But “that is not the main focus of Chinese investment,” the expert stressed.

The CCIBC’s Tang told the federal government-owned news agency Agência Brasil that Brazil’s exports to China are led by iron ore (45 percent of this country’s sales in 2011); soy (25 percent); oil (11 percent); and food.

Tang did not rule out growing Chinese interest in other sectors, like energy, where it has already started to invest. The aim in those areas is to improve conditions and lower export costs, Augusto José de Castro, vice president of Brazil’s Foreign Trade Association (AEB), told IPS.

De Castro also referred to the increase in loans to the region by China’s state banks, which have totalled 75 billion dollars since 2005, at a time when credit sources have been drying up because of the global financial crisis and due to more specific credit access difficulties faced by countries like Argentina, Venezuela and Ecuador.

“We are unfortunately highly dependent on China,” de Castro said.

“China’s monthly trade deficit has increased,” de Castro said at a recent conference organised by the Getulio Vargas Foundation. “This is a new development that no one expected. The Chinese can curb that deficit or stimulate their exports. And if that happens, they will displace exporter countries like Brazil.”

He said the only way to turn the situation around is to negotiate with China to get it to import manufactured Brazilian goods, rather than just raw materials.

“It is clear that if we stay on the current track, integration with China will deepen Latin America’s dependence on the old agro-export structure,” Adhemar Mineiro, an economist with the Inter-Union Department of Statistics and Socioeconomic Research (DIEESE), told IPS.

According to Mineiro, who is an adviser to the Trade Union Confederation of the Americas (TUCA), with the exception of a few differences, trade with China replicates the model of commercial relations with Europe and Japan: Brazil as an exporter of agricultural, mineral and energy commodities and an importer of manufactured and industrial goods.

“If the growth in ties with China continues to follow this pattern, it will mean even heavier dependence,” he warned.

In general, the governments of Latin America should seek alternatives in order to avoid “accentuating the current pattern of economic relations with China,” he said.

“In Latin America, the commodity export model has historically meant the concentration of income, wealth and power in a few hands, which runs counter to the search for ways to deepen democracy and improve the distribution of wealth in the region,” Mineiro said.

The Economic Commission for Latin America and the Caribbean (ECLAC) issued a similar warning in 2010.

China’s presence is also felt in the gradual introduction of its currency, the yuan, by means of loans. This could have an influence on the regional economy, depending on the volume of business done in that currency, the economist said.

But “the issue is that it further reduces Brazil’s economic power in negotiating with the Chinese, at a time when various industrial sectors have faced difficulties in competition with Chinese products,” such as footwear, textiles, clothing and electronic components, he said.

Branco warned about the future risk of fixing quantities of sales to China, given the possibility of changes in the external scenario that affect the volatility of prices.

“If that happens, there could be a change in interest in maintaining contracts and in the focus of investments, which would affect the multiplier effect of those investments on the Brazilian economy,” he said.

The problem, the FUNCEX economist said, is that Chinese investments cannot be expected by themselves to shift the focus of exports to products with greater added value.

“If commodities are profitable, there will logically be an interest in investing in them, among both foreign investors and Brazilians,” he said.

In order to grow its industrial exports, Brazil must improve internal conditions.

The APEX-Brasil report also notes that China’s strategic focus on countries rich in natural resources is the same in Latin America as in other developing regions, such as Africa and the Middle East.