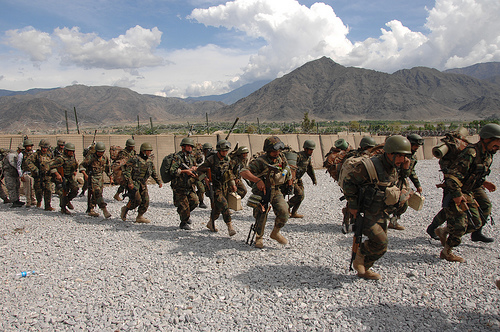 WASHINGTON, Mar 12 2012 (IPS) - While U.S. officials insisted their counterinsurgency strategy is still working, Sunday’s pre-dawn massacre by a U.S. staff sergeant of 16 people, including nine children, in their homes in Kandahar province has dealt yet another body blow to Washington’s hopes to sustain a significant military presence in Afghanistan after 2014.

The massacre was perpetrated by one individual acting entirely on his own, the Pentagon said Monday. But it was the latest in a series of recent incidents, including the dissemination on the Internet of a video showing four U.S. soldiers urinating on the corpses of dead Afghans and the apparently inadvertent burning of copies of the Quran outside a U.S. military base, that have stoked popular outrage against U.S. and other foreign troops.

It also took place amid indications that the U.S. electorate and Congress are increasingly disillusioned with what last year had already become the longest war in U.S. history.

A new Washington Post/ABC public opinion poll released Sunday found that 60 percent of respondents now believe the Afghan war was not worth fighting, close to an all-time high in the decade-long war.

The massacre also took place just after Washington and the government of President Hamid Karzai had finally agreed on one of two key points of contention that have stood in the way of the signing of a strategic partnership agreement that would permit Washington to retain a substantial military advisory force and possibly access to several key bases after 2014, the deadline by which foreign combat troops are to have left Afghanistan.

The two sides reached an agreement last week on transferring some 3,200 suspected Taliban insurgents detained by U.S. forces at the Parwan prison at the U.S.-controlled Bagram air base to Afghan custody over the next six months.

Under the accord, the U.S. will retain a veto over whether specific detainees could be released by Afghan authorities so long as U.S. troops remain in Afghanistan. In addition, the two sides agreed that Washington will retain custody of non-Afghan prisoners believed to be affiliated with Al-Qaeda.

Yet to be resolved, however, is Karzai’s demand that night raids be ended against alleged Taliban targets by U.S. Special Forces. The raids, which U.S. military officials say have resulted in the capture or killing of thousands of Taliban fighters in recent years, have also been cited by many Afghans and international non-governmental organisations (NGOs) as perhaps the most important cause of local discontent with the U.S. military presence.

Sunday’s massacre, which did not involve Special Forces, took place in three villages in Kandahar’s Panjwai district, a Taliban stronghold until U.S. “surged” troops into the region as part the counterinsurgency strategy adopted by President Barack Obama in late 2009.

According to various reports, a 38-year-old army staff sergeant who had served several tours of duty in Iraq and was deployed to Afghanistan in December left his base in the early morning hours, walked to a nearby village, and broke into three houses in a 500- metre radius, shooting and stabbing its residents, including young children. He then returned to his base where he surrendered and is now under detention.

According to the Pentagon account, the base authorities sent troops aboard helicopters to treat and evacuate the wounded, thus fuelling rumours that more than one rogue soldier was involved in the attacks.

“This latest assault was reportedly the work of a single soldier, but many Afghans won’t believe or care that it was not another routine U.S. raid. The effects are the same,” according to Ann Jones, author of the 2006 book “Kabul in Winter” and a prominent critic of U.S. counter-insurgency tactics in Afghanistan.

“U.S. officials miss the point entirely, insisting this massacre was a one-off tragedy, when Afghans know something like it will happen again any day.”

Top U.S. officials, including Obama, Defence Secretary Leon Panetta, and top military commanders issued a number of statements of regret since the incident, promising to fully investigate what took place and hold anyone responsible accountable.

Speaking at the U.N. Monday, Secretary of State Hillary Clinton also noted that Washington has “had a difficult and complex few weeks in Afghanistan” but stressed that “our steadfast dedication to protecting the Afghan people” remained unchanged.

But, while some officials expressed relief that the massacre had not yet sparked the kinds of violent demonstrations – or apparent revenge killings by Afghan troops against U.S. soldiers – that followed the Quran burning, independent analysts said it was bound to add to the mutual distrust that has become increasingly evident in recent months.

“Coming right after the unintentional desecration of Qurans and the deaths of several NATO soldiers from rogue Afghan soldiers, this latest tragedy will further inflame anti-foreign sentiment in Afghanistan and strain ties between President Karzai(‘s) government and his NATO allies,” wrote Bruce Reidel, a former top CIA South Asia analyst and an architect of Obama’s strategy in Afghanistan and Pakistan, in the Daily Beast Monday.

The killings “will increase pressure to find a political solution to the Afghan war,” he noted, adding that the fact that the Taliban have not renounced peace talks and have agreed to open an office in Qatar to facilitate negotiations in spite of these incidents were favourable signs.

But Ahmed Rashid, a Pakistan expert on Afghanistan who enjoys some influence in policy-making circles here and also favours peace talks with the Taliban, wrote in the Financial Times Monday that the Western forces in Afghanistan are facing a “crisis of confidence” and that Karzai’s “desire to seek a strategic partnership agreement with the U.S. is becoming more and more unacceptable to the Afghan people.”

The latest incident will also add to the war fatigue here.

Republican presidential candidate Newt Gingrich, a foreign policy hawk who has called, among other things, for bombing Iran, admitted Sunday after news of the massacre reached Washington that the U.S. mission in Afghanistan is “not doable” and that Washington’s intervention there was “probably counter-productive”.

Unlike Democrats and independents, who have been consistently more sceptical about the war, Republicans in the latest poll were evenly split on whether the war was worth fighting, and some Republican lawmakers were balking at the proposed budget for Afghanistan next year before the latest incident.

The soldier, whose name will not be released pending completion of an ongoing investigation, was reportedly taking part in a “village stabilisation” operation, a key part of U.S. counterinsurgency strategy that seeks to win over village elders and organise local police forces.

His home base, where his wife and two children reportedly live, is at Joint Base Lewis-McChord near Tacoma, Washington. That is the same home base of the so-called “kill team”, a unit led by another staff sergeant that killed at least three Afghan civilians in separate incidents and then cut off their body parts as trophies in 2009.

Staff Sgt. Calvin Gibbs was convicted of murder and other crimes and sentenced to a life term by a military tribunal at the base last November, but he could be freed in as little as 10 years.