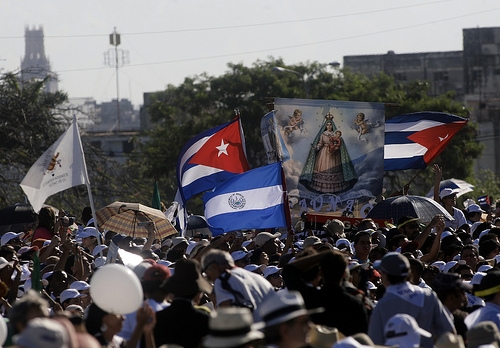 An image of the Virgin Mary next to Cuban flags in the Plaza de la Revolución. Credit: Jorge Luis Baños/IPS

“Religion is culture; I like to learn about new things,” said a woman engineer who was in the Plaza de la Revolución Wednesday, at the behest of her workplace, even though she is not a religious believer. Like her, a man who was leaving as the pope celebrated mass in the plaza, stressed “These are different times.”

The first papal visit came as Cuba was emerging from the depths of a crisis that followed the collapse of the Soviet Union and the disappearance of the East European socialist bloc. President Fidel Castro was still at the helm, and John Paul’s visit seemed to usher in a new era marked by dialogue.

Benedict, on the other hand, came to a country that, led by Raúl Castro, is undergoing a process of reforms marked by unprecedented economic realism, which is radically changing the country and creating uncertainty with regard to both the present and the future.

However, for some observers, some things never change: Raúl, like Fidel, showed respect for the pope’s opinions without failing to express his own. And Benedict, like John Paul, elegantly criticised the U.S. embargo and called for reconciliation among “all Cubans.”

“We have found many and profound areas of agreement, even if, as is natural, we do not think alike on all matters,” Castro said when bidding the pope farewell on Wednesday afternoon, after stating the need for mutual respect, dialogue and cooperation.

The pope, for his part, urged “the blossoming of all that is finest in the Cuban soul,” to be able “to build a society with a broad vision, renewed and reconciled”; a society where nobody should be excluded because of “limitations of his or her basic freedoms,” “indolence” or “a lack of material resources.”

He added: “Possible discrepancies and difficulties will be resolved by tirelessly seeking what unites everyone, with patient and sincere dialogue, and a willingness to listen and accept goals which will bring new hope.”

Symbolically, while John Paul held mass in Havana from one side of the Plaza de la Revolución, with the National Library in the background, Benedict did so at the foot of the monument to national hero José Martí, where platforms are traditionally set up for revolutionary rallies.

In that historic site, blown by the winds of the fifth Wednesday of Lent, the pope assured that both Cuba and the world “need change, but this will occur only if each one is in a position to seek the truth and chooses the way of love, sowing reconciliation and fraternity.”

In his homily, which centred on the idea of “truth,” the pope questioned those who “prefer short cuts,” deny that “there exists a truth valid for all” or “wash their hands” like the Roman governor Pontius Pilate, and “let the water of history drain away without taking a stand.”

“On the other hand, there are those who wrongly interpret this search for the truth, leading them to irrationality and fanaticism; they close themselves up in ‘their truth,’ and try to impose it on others,” the pope said, emphasising that “Faith and reason are necessary and complementary in the pursuit of truth.”

The homily complemented the messages read by the pope when he arrived on Monday the 26th for a three-day visit that included two masses, a visit to the Sanctuary of Our Lady of Charity of El Cobre in the eastern province of Santiago de Cuba, an official meeting with Raúl Castro and a last-minute meeting with Fidel Castro.

While Benedict’s remarks were not lacking in references to marriage and the family, he barely mentioned a matter important to some in civil society, who defend women’s reproductive rights and promote respect for sexual diversity, including legal same-sex unions.

Among the Catholic Church’s aims was Benedict’s request that President Castro declare Holy Friday a holiday in Cuba, and the possibility of strengthening religious freedom.

Coming at what is perhaps the best moment in relations between the local Catholic hierarchy and the government since the 1959 revolution, the pope’s visit was preceded by tensions provoked by dissident groups which, in mid-March, occupied several Catholic churches to make their political demands heard.

In a similar attempt, a man got past security in Santiago de Cuba’s Plaza de la Revolución moments before the pope said mass, shouting “down with Communism”. Online footage of the incident showed that as he was removed from the plaza by security, he was struck by at least two individuals in the crowd.

“There’s a right for people to express their opinions, but there also is the right not to be disturbed in one’s religious activities,” Vatican spokesman Federico Lombardi told reporters regarding the incident, which has not been mentioned in the Cuban media.

Amnesty International, meanwhile, issued a press release on Wednesday saying that, in the interest of silencing any demonstrations during the pope’s visit, arrests were stepped up, homes were surrounded and the telephone lines of activists and opposition groups were disconnected.

Benedict abstained from publicly repeating his opinion about the exhaustion of communism, expressed before his arrival in Mexico on Mar. 23. However, the archbishop of Miami, Florida, Thomas Wenski, said that Marxism is a “spent ideology,” in a mass that he celebrated at the cathedral in Havana on Tuesday Mar. 27.

Some 300 mainly Cuban-American pilgrims from Miami who attended the mass applauded Wenski, shortly before a flotilla organised by the anti-Castro group Democracy Movement that stopped out at sea about 20 km from Havana and shot off fireworks to demand respect for human rights in Cuba.

“What does the pope bring us in Cuba?” Cuban Cardinal Jaime Ortega asked in his greeting to Benedict at the beginning of the Wednesday mass in the Cuban capital. “Let’s leave the answer up to our people,” the archbishop of Havana added, summing up the expectations surrounding the pope’s visit.