World Congress Hopes to Enforce Commitments Made at Rio+20

UNITED NATIONS, Mar 26 2012 (IPS) - World leaders may face an unexpected challenge come June, when a major global summit on sustainable development will be held in Brazil. Unlike during previous summits, these leaders might have trouble making promises they are unable to keep. 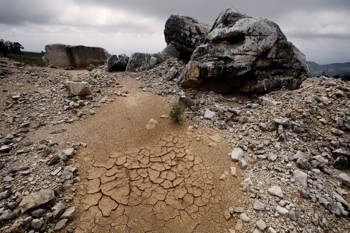 Desertification is only one of climate change's many damaging consequences. Credit: Mauricio Ramos/IPS

“We are really tired of declarations,” Antonio Herman Benjamin, judge of the Supreme Court of Brazil, told an international gathering of legal experts here Monday. Despite some progress made since the 1992 Earth Summit held in Rio de Janeiro, Brazil, most governments have failed to fulfil their obligations.

As a result, the court has launched a new initiative to promote role of law in advancing sustainable development. It is known as the World Congress on Justice, Governance and Law for Environmental Stability.

The Congress’s scores of members from around the world include senior judges, prosecutors, legal scholars, auditors and development experts. They plan to focus on the problems and obstacles that hinder the implementation of multilateral environmental agreements.

Organisers said the World Congress intends to lead to the formulation and presentation of key guiding principles for strengthening the role of environmental law in achieving sustainability through the outcomes of this year’s United Nations Conference on Sustainable Development, commonly referred to as Rio+20, and beyond.

Among the measures that are likely to be discussed are the roles of courts and evolving environmental jurisprudence.

Reflecting on the slow progress on meeting sustainable development goals, Benjamin explained that in many cases, environmental policies are formulated in a way that lacks requirements for guidance on implementation.

“Laws do not mean anything when they are not effectively implemented,” he said. “We need to close the gap between legal scholarship, parliaments and judges, because what is written can be ignored.”

Despite the numerous agreements that have been negotiated since the 1972 Stockholm Conference on the human environment and the 1992 Earth Summit in Rio, experts noted that “only limited” progress has made towards achieving sustainable development goals.

Only a few multilateral agreements, such as the Montreal Protocol on the Protection of the Ozone Layer, which has precipitated a 98 percent drop in the consumption of ozone depleting substances, have produced meaningful results.

“The Montreal Protocol is a prime example of what can be achieved when countries work together effectively on agreed legal frameworks,” said Amina Mohamed, deputy executive director of United Nations Environment Programme (UNEP).

The Congress, according to Mohamed, would focus on the actions needed from legal practitioners to overcome challenges and promote the transition to a low-carbon, efficient and socially inclusive green economy founded on the rule of law.

In recent days, discussions at the United Nations about what needs to be done at the Rio Conference have indicated that many civil society groups and development activists remain as frustrated and disappointed with governments’ roles as they were before.

“I think the Rio+20 process risks being undermined by vested interests and powerful governments,” said Michael Dorsey, professor of global environmental policy at Dartmouth College, who has attended scores of international meetings on development and environment since the 1992 Earth Summit.

The ecological crisis – from resource depletion to pollution, loss of biodiversity and an unfolding climate crisis – has worsened since 1992. Marginalisation and exclusion are on the rise as well, he told IPS, although some countries have made progress in the social dimension.

In major agreements such as the Rio conventions, sustainable development is considered to require fundamental shifts in three areas: climate change, biodiversity and land degradation, he added. “The Rio+20 institutional framework needs to facilitate the interface and integration of the three pillars.”

As the host of Rio+20, the Brazilian government, along with members of the country’s judiciary and auditing community, is supporting the Congress’s initiative.

The event will be co-hosted by the Association of Magistrates of the state of Rio de Janeiro. Its partners include the Organisation of American States, South Pacific Regional Environment Programme, Interpol, World Bank, and the International Union for the Conservation of Nature.