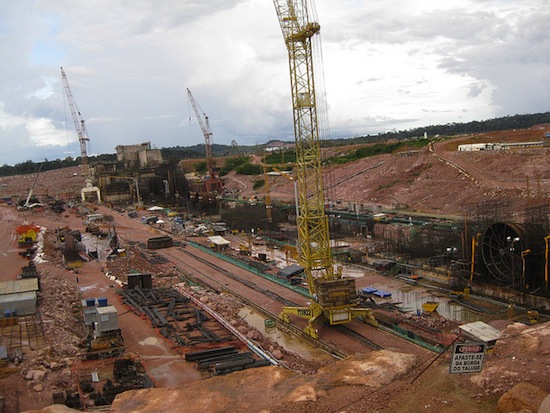 MARSEILLE, France , Mar 19 2012 (IPS) - Numerous non-governmental organisations used the World Water Forum (WWF) held in Marseille last week as an opportunity to remind the international community about the serious global impacts of large dams all over the world.

Defined as dams higher than 15 metres or with a reservoir volume of at least three million cubic metres, large dams number no less than 48,000 worldwide and present numerous issues, not least of which is a considerably negative impact on the livelihoods of local populations.

Three organisations – the International Union for Conservation of Nature (IUCN), the International Institute for Environment and Development (IIED) and IRAM, a French institute for research and application of development methods – recently released a study entitled “Sharing the water, sharing the benefits”, which focused on six large dams in West Africa to highlight various population impacts.

Jérôme Koundouno, one of the report’s authors, told IPS that when large dams are built they result in massive displacement of communities, which is a complex process.

He said that the land area required for dams necessitated “relocating people, rebuilding houses, and giving new land to people for farming,” which also means providing support and compensation to displaced families.

Yet, most of the dams built in the 1980s and 1990s did not bring any kind of compensation for the displaced, provoking a slew of detrimental societal consequences.

Taking the example of the Sélingué dam in Mali, built in 1981, Koundouno explained to IPS that the displaced families, who received a plot of land on the new perimeter of the dam, had to leave shortly afterwards because they were used to traditional irrigation techniques and could not adapt to the new ones.

“They had to abandon the plots because they were not able to produce enough and to reach their expected output. So those communities have (effectively been stripped) of their plot of land,” he told IPS.

Another problem sparked by the building of large dams, Koundouno claimed, is the creation of a “genuine growth centre around the reservoirs, whose water is shared by multiple users, leading to conflicts over the (scarce resource). This is because water management is unfortunately often not equitable.”

The conflicts appear on one hand between the fishers, farmers, and breeders, and on the other hand between the native population and migrants, who are lured by the promise of employment in this new growth centre.

The World Commission on Dams estimates that 40 to 80 million people have been displaced by the construction of such dams worldwide.

Large dams also generate environmental impacts such as flooding, deforestation, reduced pastureland, and a fall in the number of large mammals – all of which threaten the food security of local populations.

Jane Madgwick, CEO of Wetlands International, told IPS the flow reduction of the Niger River foreshadows a negative impact on the livelihoods of people downstream who are dependent on fishing.

The conviction is thus spreading that large dams should not be considered a “green energy alternative” if they are not planned in a sustainable way.

Jeremy Bird, soon-to-be director general of the International Water Management Institute, stressed the need for increased awareness on the sustainability of hydropower energy.

With this aim, the International Hydropower Association published the Hydropower Sustainability Assessment Protocol to define good practices and try and impose them on new construction projects.

Alternatives to large dams do exist

Many experts are now starting to believe that the problems posed by large dams outweigh their benefits – namely providing water and energy – and should thus be replaced by other forms of renewable energy, such as solar power and wind energy.

“In Latin America and primarily in Chile, for instance, the potential for solar power is infinite,” Juan Pablo Orrego, president of the Chilean NGO Ecosistemas, told IPS, adding the Chilean government should invest in this form of energy.

Alternative solutions were also debated intensively during the Alternative World Water Forum (known by its French acronym FAME), held last week alongside the WWF. In particular, the option of the “mini- hydro”, or small-scale hydropower, was highly promoted.

Focusing on the needs of local populations, experts who attended FAME pointed out the effectiveness of small turbines and small dams.

Ronack Monabay, an activist with Friends of the Earth, commended the decision of the Nepalese government to open the energy market to small producers, in order to implement small- and medium- scale dam projects, capable of generating up to 100 megawatts.

This decision followed a campaign spearheaded by many environmental NGOs and pressure from civil society to halt the World Bank-sponsored project ‘Arun III’, a large dam that would have ravaged the Himalayan forests.

Such a process of heeding the voices of small producers and local communities grants the stakeholders more autonomy in the decision-making process and allows communities to agree what is best for them.

On Mar 14. International Rivers, along with other environmental organisations, campaigned against the “corporate green-washing of dams”.

They told IPS all that is needed now is more political will from decision-makers to implement these alternatives, instead of promoting the large dams projects that represent huge profits for multinational corporations.

In order to avoid the social and environmental problems created by large dams, and with the aim of providing water for everyone, semi-arid areas use another technology, called sand dams.

The NGO Excellent came to the WWF to raise awareness on this effective way of tackling food insecurity and lack of water around the world, particularly in regions where rainfall is intense but over very short periods of time.

Sand dams are able to store enough water for one thousand people to subsist for an entire lifetime. Moreover, sand dams are built and managed by local communities, which is a very cost-effective solution.

While sand dams do not provide populations with energy as a large dam does, Maddrell believes this is not a priority for the affected communities, who first need water and food.