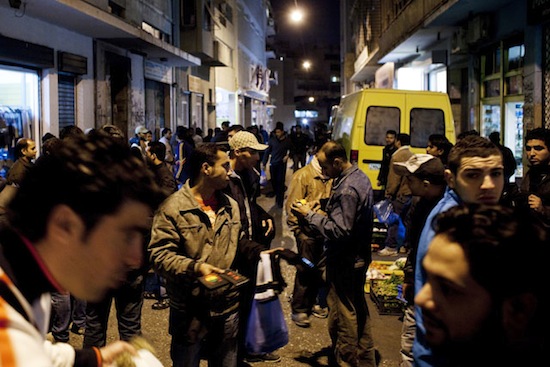 The nature of the assault alarmed Maria Daneil and Artemis Kalofuri, as well as other teachers in schools around the area, who consider this to be just the latest in a sequence of racially charged confrontations in Greece’s economically fraught urban areas.

“There has been a deteriorating picture including anti-migrant attacks, the attack on a makeshift mosque, harassment of students, as well as the appearance of people flaunting neo-Nazi paraphernalia around the schools. We felt that passive observation is not effective anymore, we had to do something,” Kalofuri told IPS.

With support from the local branch of the association of teachers (ELME), the educators formed a student discussion group, where questions on migration, racism and fascism, as well as current social issues arising from those problems, could be raised and analysed by pupils themselves.

Kalofuri said, “Between 60 or 70 people showed up the third time we met.”

All major political parties will play the migration card in their campaigns during the run-up to the elections, slated to be held at the end of April or early May.

Many pre-election polls illustrate a polarised electorate that is going to bring into the parliament many minor radical parties, including the notorious national socialist organisation Golden Dawn.

Leader of the right wing New Democracy party, Antonis Samaras and founder of the right wing extremist LAOS party, George Karatzaferis, both current members of parliament, have already made openly xenophobic remarks in order to limit the defection of their voters towards the even more radical right wing.

In a recent speech to the parliament, Karatzaferis called for illegal migrants to be sent to camps where they will work for food.

Samaras accused a failed citizenship law – designed to facilitate the normalisation of second generation citizens - that has been stalling in the high court for years, for attracting hundreds of thousand of illegal migrants to Greece.

The fact that only 2,500 migrants have been granted Greek citizenship since the law appeared, the vast majority of them ethnic Greeks from other countries, invalidates this claim.


Daneil believes the attack is further complicated by the fact that the assailants were mostly second- generation migrants themselves.

“It is socially complicated,” she says, “but the pattern involves the radicalisation of isolated or less wealthy kids, with family issues, that at some point come in contact with radical nationalist groups.”

Both teachers mentioned links between a very small number of pupils and radical nationalist groups as well as the establishment of a culture of fear and silence regarding the issue.

Fear, particularly, is what Yunus Mohammedi, an Afghan immigrant residing in Greece for over ten years, has begun to notice in the city, as public aggression has almost become a daily issue.

In order to alert fellow Afghan immigrants, Mohammedi circulated a map of Athens, marking in red the zones where most violent incidents take place.

“This is how we used to warn people about the places they ought to avoid in Afghanistan when I worked there for Doctors Without Borders,” he recalled to IPS.

“We explain to new-comers as well as people for who have been in Athens for longer, which places to avoid when it gets dark and advise them not to walk around alone if possible.”

A trained pathologist and one of the few Afghans that speaks fluent Greek, Mohammedi has become a person with whom many Afghans consult when they are in trouble.

“Ten years ago things were very different. Back then you had to worry about having a job and making ends meet. Now it is dangerous, we often have to care for people stabbed or violently beaten. I often receive phone calls from people threatening me for getting involved,” he said.

The economic crisis has altered significantly the social rules between Greeks and immigrants and asylum seekers, mostly from Asia and Africa.

Since 2005 Greece has become the main influx point for undocumented migrants, with more than 80 percent entering Europe coming from Turkey through the Aegean Sea or the Northeast mainland boundary of the river Evros.

The vast majority of these migrants hope to move towards Northern Europe. However, clauses in the Dublin II regulations that dictate the returns of irregular immigrants to the country they entered have effectively condemned scores of immigrants to remain stuck in limbo in Greece.

This has transformed the country, and Athens in particular, into a depot of hundreds of thousand of irregular immigrants and asylum seekers, who survive on below-subsistence incomes won in a vast black market.

Certain areas of the capital have been morphing slowly into semi-permanent migrant quarters with the municipality estimating that in certain central areas, Greeks number less than four percent of the population.

According to Eurostat, Greece’s economy is retracting at the alarming rate of 7.5 percent, while unemployment climbed to 21 percent last December.

Lack of employment in the regular and irregular markets has increased antagonisms not only between Greeks and foreigners but also between various migrant groups.

Far-right groups have capitalised on this situation to increase their popularity and recruit membership around the run-down areas of the city, leading to an explosion of anti-migrant rhetoric and violent attacks against Asian and African migrants.

Marianna Tzeferakoy, a lawyer with the Greek Council for Refugees (GCR), told IPS, “Many people referring to the GCR for assistance have reported violent behavior, but given that no structure for monitoring the situation is available, we have no picture of the scale of the problem. We know only that is it worsening very quickly.”

Tzeferaku as well as Mohammedi have alleged that Greek police personnel are systematically discouraging migrants from reporting violent incidents.

“The testimonies we have collected so far from victims and associations providing services to migrants and asylum seekers suggest that the violence has increased significantly over the last several years,” Sunderland told IPS.

“We have collected numerous testimonies indicating that the police have failed to intervene rapidly or have discouraged victims from filing official complaints. We are similarly concerned that the government has not yet acknowledged the gravity of the situation. Neither consistent condemnations of attacks, nor a clear plan of action to prevent attacks and punish those responsible, have been articulated.”

Greek police spokesman Athanasios Kokkalakis, who has opposed these allegations, told IPS, “Whenever the Greek police has received a detailed report about incidents related to racially motivated violence it has intervened and arrested anyone responsible, even in cases where the accused have been police officers themselves,” he stressed.

The combination of a relentless migration wave and the deteriorating economic crisis fuelled by austerity measures is giving birth to complicated social issues says, Kokkalakis added.

“Migrants are at the same moment victims and perpetrators of crime. They arrive in a country in which social cohesion is challenged and welfare and social structures that could support them are on the point of collapse. At the same time they are under enormous pressure from international trafficking networks that push more and more of these people into criminal activity.”

A representative told IPS, “It is early to talk about specific results; yet it is obvious that a pattern of violent aggression has started forming in certain areas of the capital.”

After the results are examined the agency will try to put in place a permanent observatory of racial and anti-migrant violence.