KABUL, Apr 18 2012 (IPS) - Afghanistan is quickly becoming one of the deadliest countries in the world for foreign and local journalists. In the last decade alone, 16 journalists have been killed on the job and so far no one has been brought to justice for these murders. 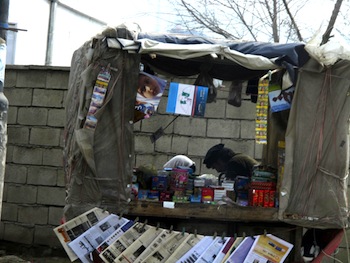 The silence of Afghan President Hamid Karzai in the face of such impunity is also a serious cause for concern for press freedom advocates.

After the fall of the Taliban and the arrival of foreign troops in 2001, Afghanistan experienced a ‘media boom’ that led to the rapid proliferation of publishing and broadcasting houses. The country is currently home to 200 print news outlets, 44 television stations (25 of which are in Kabul), about 141 radio stations and eight news agencies, all of which are increasing steadily.

Sadly, this increase has done little to improve press freedom in the country, since most media are linked to the government, warlords, the governments of occupying forces, or powerful, wealthy men – none of whom allow journalists to carry out their work properly.

Add to this the Taliban-imposed censorship of all media, including images of nudity that appear in soap operas, and the press landscape in Afghanistan bears striking resemblance to a battlefield on which journalists must wage a daily war to report the truth.

Nazir Fayaz, a 34-year-old journalist who has been working for years at Ariana TV, was forced to resign three months ago because of a dispute with the Iranian ambassador.

During an interview the Iranian diplomat accused Afghan people of “accepting the foreign occupation”, a statement which Fayaz openly criticised.

Because his harsh response to the ambassador was broadcast nationwide, Fayaz was put in jail for two days, then forced by Iranian and Afghan authorities to resign.

Now, Fayaz gets threatening phone calls not only from the Iranian embassy but also from “the government, warlords, drug traffickers and Taliban. It’s very risky to be a journalist in Afghanistan,” Fayaz told IPS.

“There is no freedom of press in Afghanistan because all the media are in the hands of warlords, mafia and banks. Censorship is even stronger in governmental media. Ariana TV was (independent) until the Afghan-American owner, Ehsan Bayat, became senator,” Fayaz told IPS.

Fayaz is now considering leaving the field altogether to become an activist with the Afghan Independent Human Rights Commission because “there is no chance of doing an honest job in media in Afghanistan.” He believes that free media is crucial to bringing peace to the country, “but if there is no freedom of expression the result will be the opposite,” he predicted ominously.

Some provinces in the south and east of Afghanistan, like Helmand, Uruzgan, Paktika and Farah, are no-go areas for journalists.

On Feb. 22, 2011, the decapitated body of Sadim Khan Bhadrzai, who had been kidnapped the previous evening, was found in Urgun, in the southeastern province of Paktika. He was the manager of Mehman- Melma, a local, very popular radio, and his death was just the latest in a series of targeted assassinations of media personnel over the years.

Every year there are hundreds of cases of violence against journalists, most of them in Kabul, Herat and Helmand.

Women journalists have increasingly become the target of threats. In 2007 Zakia Zaki, the owner of Radio Peace in Kandahar, was shot and killed in her bed, where she sleeping with her young son.

But despite the dangers of the job, women haven’t given up.

Najeeba Feroz is a frail but resolute 24-year-old journalist working for BBC Afghanistan, which broadcasts in Dari and Pashto. Her office in Shara Now, in the centre of Kabul, is a well protected building surrounded by armed guards.

Feroz earned her degree at Kabul University and worked at a string of independent print and broadcast outlets, including Tolo TV, but was soon frustrated by the lack of independent reporting and the heavy- handed political control of all media.

“The only choice you have is between censorship or self censorship. That’s why I moved to the BBC,” she told IPS.

Here, “we verify all our sources and we don’t care if we have to report on corruption involving the government or warlords, as long as the reporting corresponds to reality,” she said.

Feroz, like many other journalists, wants to leave the country.

“After three years of work here (at the BBC) we have the opportunity to spend one year outside, this will be a good chance, but after that I will come back to help my people,” said Feroz, whose beat is covering women’s issues that often go unreported.

Senator Belqis Roshan, another intrepid female journalist, told IPS she travels around her province of Farah, collecting news about violence against women and raising the voices of victims in the senate, because “in Farah we have no media at all,” she said.

Afghanistan has a stubbornly high illiteracy rate of 72 percent, so TV and radio are the most effective ways of spreading news around the country.