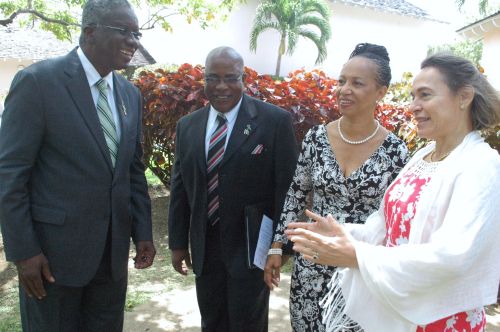 BRIDGETOWN, Barbados, Apr 2 2012 (IPS) - When it comes to developing a “green economy”, Barbados is leading its English-speaking Caribbean neighbours.

Last week, the government unveiled a Green Economy Scoping Study (GESS) outlining sectors on which the island, which depends heavily on tourism for foreign exchange, should focus as it builds its green economy.

“Given the importance of these sectors and the already existing legislation that supports behavioural change, it is likely that there could be spill-over effects to other sectors in the economy,” the report noted.

The document presented to Prime Minister Freundel Stuart by the deputy principal of the Cave Hill campus of the University of the West Indies (UWI), Professor Eudine Barriteau, notes there are “tremendous opportunities” for greening agriculture, fisheries, building/housing, transportation and tourism.

“It will also be necessary to develop the supporting enabling conditions to facilitate the transition in the areas of financing, development access and transfer of clean technology, trade tariffs and investment, taxation, incentives and fiscal reform, education, training and capacity enhancement, standards and regulation, and government procurement,” it says.

The launch of the GESS comes mere months after the island launched a Coastal Risk Assessment and Management Programme (CRMP) – another first for the region – which Stuart said would deliver a comprehensive evaluation of the risks and vulnerabilities of Barbados to sea level related hazards such as storm surges and tsunamis.

Stuart said that the Caribbean needs a fresh model for development and a green economy is the best way forward, even as he lamented that the prevailing global financial and environmental crises pose severe challenges for small island developing states.

He said this raises serious questions about existing models of development and he challenged the Caribbean to pursue a resource- efficient green economy as a pathway to sustainable development.

“Given their high debt profiles, vulnerability to external shocks, their openness, limited capacity of their markets, and the need for institutional strengthening and capacity building, most of these countries – including Barbados and other CARICOM States – will require financing and technical cooperation to transition to a resource- efficient green economy,” Stuart said.

“The overall objective of the Barbados Green Economy Scoping Study is to support and complement national initiatives towards achieving a green economy, through macroeconomic assessments and policy analysis.

“These will help us to better understand how government policies and public and private investment can help achieve the fundamental macroeconomic objectives, while following a path that also contributes to social equity and environmental management,” he added.

Stuart listed the macroeconomic objectives as income growth (leading to poverty alleviation); economic development and or diversification; and job creation.

The Barbados prime minister said as the region prepares for the major sustainable development conference in June known as Rio+20 and, more importantly, as the world searches for new approaches for achieving sustainability, the adoption of green economic policies presents an integrated approach for pursuing Sustainable Development in Small Island Developing States (SIDS).

“Greening the economy, once crafted as a policy to address our structural vulnerabilities like small market size, limited resource base, openness to trade, and vulnerability to natural disasters and external economic shock, can present a viable development model for reshaping and re-invigorating our factors of production, towards the pursuit of sustainability,” he said.

The researchers also suggested that a successful shift to a green economy could give Barbados its first major economic transformation since the shift from sugar to tourism.

“To realize these potential opportunities, the country will have to address various sector specific challenges, for example, lack of research and development in agriculture, standards legislation in fisheries, lack of training programmes and regional experts in building/housing, public attitudes to green initiatives in transportation and the heavy dependence on imports as well as low occupancy rates in tourism,” they concluded.

The report said notwithstanding “the ongoing dialogue at the international level, the pursuit of a greener path of economic development is attractive to Barbados, especially given its limitations in relation to size and dependence on natural resources and fossil fuels.

“A green economy approach gives consideration to the level of its available natural resources and ensures that they are used in a sustainable manner, and contribute to the maintenance and rehabilitation of important ecosystems and ecosystem services,” it stated.

Environment Minister Dr. Denis Lowe said the completion of the study was not the end of the journey, but another step along the way.

He said the study unearthed many useful opportunities for future collaboration which would be discussed during the two-day forum, hosted by government and the UWI in association with the United Nations Environment Programme (UNEP).

“I eagerly look forward to the next phases of our work on the green economy,” Dr. Lowe said, giving the assurance that his government would apply the same level of enthusiasm and dedication to further work to be done in the area as efforts are made to move Barbados closer to a green economy.

The GESS found that Barbados’ transition to a green economy offers opportunities for further diversifying its economy, increasing resource efficiency and supporting the goals of poverty reduction and sustainable development.

Among its recommendations were the establishment of an overarching institutional development programme to strengthen its agricultural cooperatives; adopting and promoting new energy and resource efficiency policies for hotels; and establishing new heritage and nature-based tourism sites.

In addition, the study has also recommended the development of an integrated public transportation policy and investment programme, and the establishment of a vehicle emission testing facility to reduce traffic congestion and carbon emissions.