CARTAGENA DE INDIAS, Colombia, Apr 12 2012 (IPS) - In preparation for the Sixth Summit of the Americas, the gathering’s Social Forum has held 25 meetings since September, as well as dozens of online working sessions, with the participation of some 7,000 people. 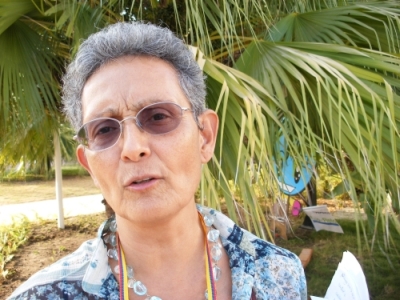 Socorro Ramírez is the coordinator of the Social Forum of the Sixth Summit of the Americas in Cartagena. Credit: Constanza Vieira/IPS

The coordinator of the Social Forum, Colombian feminist and trade unionist Socorro Ramírez, said the governments of the continent “are listening.”

The Social Forum, meeting from Monday Apr. 9 to Friday Apr. 13 in this city on Colombia’s Caribbean coast, will end with a “political dialogue” to be attended by all of the hemisphere’s foreign ministers, with the exception of Cuba’s, and a closing address by host President Juan Manuel Santos and his Bolivian counterpart Evo Morales.

This week, the 950 representatives of the forums and online working sessions put the final touches to their common proposals and formulas for implementing them.

Ramírez said the Social Forum of the Apr. 14-15 Sixth Summit of the Americas, which will also be held in this city, “was gradually built from the previous ‘counter-summits’ and summits.”

Indigenous people: The biggest concern expressed this week at the Fourth Summit of Indigenous Leaders is physical integration through improved infrastructure. And they protested megaprojects that turn development into the "extermination" of the most vulnerable populations.

New technologies: Young people pointed out that the countries of Latin America continue to depend on the extraction of raw materials and do not put a priority on science and technology, or on improving the capacity for innovation. When natural resources run out, these countries will be worse off than ever.

Blacks: Organisations of black people have been, perhaps, the social sector that has participated with the greatest vigour in the forums. They noted that Afro-descendants continue to be overwhelmingly poor and are still excluded from improvements in living conditions in the region.

Natural disasters: The dangers of natural catastrophes are growing. Climate change has led to an increase in frequency and intensity of disasters, but the capacity of states and societies to deal with and prevent the risks has not improved. Government responses have been short-term, and risks must be addressed in an integral manner.

Security: The issue that drew the biggest crowds, and that was the focus of the largest number of forums. Each one tackled the question from a different angle.

Drugs: The forums concluded that anti-drug policies produce more negative than positive effects today, that the so-called triumphs are partial and short-lived, and that the triumph of one is the downfall of another.

On the horizon is the end to drug prohibition. But it is important not to get trapped in the prohibition-legalisation debate, and it is necessary to start to generate risk and damage reduction strategies at all levels of the problem, starting with production.

There was also an absolute consensus that small-scale producers – peasant farmers - who have no alternative livelihood must no longer be treated as criminals.

Cuba: If Latin America and the Caribbean already include Cuba in everything, why does the United States remain attached to a legacy of the Cold War, as President Barack Obama himself has stated? This was the main question raised.


Cuba is not participating in this weekend’s summit, on the argument that it does not form part of the Organisation of American States (OAS). But its inclusion “is an issue that has already been put irreversibly on the agenda,” she told IPS.

The fifth People’s Summit – an example of the “counter-summits” to which Ramírez referred – is also being held in Cartagena, from Thursday Apr. 12 to Saturday Apr. 14, with Cuba’s participation.

“It’s being held by left-wing people, or people who also feel that things are not really that open,” said Ramírez, a political scientist and historian with a postdoctoral degree, who taught at the public National University.

“But I do think the doors have been opened,” she said. “We have organised 20 forums in Colombia and 60 more in other places. We have managed to take the issues of the summit and approach them from all possible angles, from all of the different social sectors.

“We have made this space a reality,” she said. “It has been extraordinary, because we got the Colombian government to understand and accept that it was essential to create the best conditions for a space for dialogue with society.

“Friday (Apr. 13) will be the first time that a dialogue between the multiplicity of social actors and the governments will be achieved, in any international event,” said Ramírez, who was a socialist presidential candidate in 1978.

In the schedule, the political dialogue was given two hours in the morning. Will the governments listen this time? “They are listening,” she responded.

“This process, which we have called ‘the road to Cartagena’, has been an intense debate,” she said. Its main proposals were gradually presented to the meetings held by the governments to negotiate the documents to be approved at the summit.

The preparatory meetings discussed the five key areas on the official summit agenda: integration through improved infrastructure, access to and use of new technologies, poverty and inequality, natural disasters, and security.

Ramírez hopes that by the end of the Social Forum, civil society will have managed to unify initiatives so that Friday’s dialogue “reflects plurality and is so compelling that it is able to get the governments to talk about the essential issues.”

She said she was confident that it would not be “a monologue, but truly a pronouncement by the governments on the initiatives that have arisen here, at the Fourth Summit of Indigenous Leaders, and from the Afro-descendants, the women’s networks, and the Bolivian force that arrived in the early hours of the morning on Wednesday: miners, women, indigenous people, who have been in all of the forums.”

The governments will thus see society’s “capacity to take the initiative, to engage in dialogue, to protest, and they will see that societies have a growing capacity to look at the bigger picture with respect to the issues of concern in the Americas,” Ramírez said.

Although summits do not often bring about changes, she was optimistic, because in Cartagena “another Latin America and Caribbean” is being seen – a closer-knit region marked by differences but by an ability to come together as well.

It is this region “that is here deciding on the issues to be discussed,” she said. “And it is up to the United States to say: ‘OK, we’ll talk about what all of you say you want to talk about.”

“The perception that has been fairly widespread in the forums is that Cartagena has produced effects before the presidents have arrived, on two issues at least: Cuba and drugs,” she said.

“These are no longer questions left to academics and former presidents; they are now being discussed by the presidents. And the United States had to say ‘OK’. I hope the result is an organised debate, especially with respect to alternatives,” she said.