LALMONIRHAT, Bangladesh, Apr 19 2012 (IPS) - The Aditmari Maternity Centre (AMC) is unpretentious but hygienic, and its staff of paramedics welcomes pregnant women from the poor farming villages of this district, 375 km northwest of Dhaka. 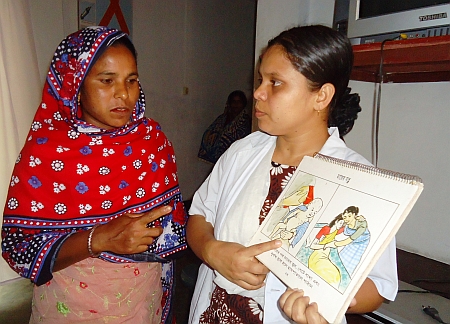 Asphalt roads lead up to the single storey, located in the centre of Aditmari sub-district, that has a labour room equipped for normal deliveries, a ten-bed post-labour room, two rooms for counselling and a waiting room with a wide porch for men.

Best of all, the charges for a normal delivery at the AMC are just 2.4 dollars, affordable in impoverished Bangladesh where the per capita income in 2011 was 818 dollars, according to official figures in the Bangladesh Economic Review.

It was at the AMC that Sajeda Begum gave birth to a healthy baby girl two weeks ago. “My daughter had no signs of pre-delivery complications,” says a smiling Tahmina, Sajeda’s 53-year-old mother.

Affordable but reliable maternal health services are what allowed Bangladesh to bring down the resource-poor country’s maternal mortality rate (MMR) from 322 deaths per 100,000 live births in 2001 to 194 deaths in 2010.

Bangladesh’s achievement is impressive considering its classification by the United Nations as a least developed country. Also, better-off neighbours, India and Pakistan, are faring worse with MMR ratios of 212 and 260, respectively.

Improved access to obstetric care, more institutional deliveries and better use of family planning methods are expected to help Bangladesh achieve the United Nations Millennium Development Goal (MDG) of reducing MMR by three-quarters during the 1990–2015 period.

Also encouraging is the fact that the rate of decline in maternal mortality, at an average of 5.5 percent per year, is better than the 5.4 percent required for reaching the MDG by 2015.

As in many other LDCs, the gap between rich and poor in Bangladesh’s maternal health can be stark. Had Sajeda gone to a private clinic her delivery would have cost at least 60 dollars.

Sajeda also did not have to worry about access to care during pregnancy as she regularly received antenatal checkups.

“Sajeda attended the clinic eight times and followed instructions. It is quite amazing that she delivered on due date,” said Shaheen Afroz, chief staff nurse at the AMC, run by the Rangpur Dinajpur Rural Services (RDRS), a non-government organisation (NGO), since 1981.

There are now eight outreach maternity centres in Aditmari sub-district where pregnant women are referred to for examination, but deliveries are done only at the AMC. Patients are registered in coordination with regular government healthcare services to avoid duplication.

Mosammet Elifa, a community health worker at the Mohishkhocha outreach centre, said: “We go from door-to-door to meet pregnant women and invite them to register for antenatal care.”

“We also explain the risks of delivery at home at the hands of untrained birth attendants,” said Elifa. “In the last ten years we have had no records of maternal deaths in our community.”

“We charge only 24 cents for registering a pregnant woman. Thereafter, the consultations, drugs, such as those for sexually transmitted infections, iron and vitamin supplements, blood tests and routine examinations are given free of cost,” said Afroz.

Deepali Rani, 28, now in her second trimester, told IPS that she comes from Durgapur village for regular clinics at the AMC. “My relatives and friends told me about this centre and I find the treatment here good and systematic.”

Project coordinator at RDRS, Komol Kumar Joardder, told IPS that on average 30 women avail of the facilities daily at the AMC. “While the women are waiting to be examined we run awareness programmes on safe motherhood and try dispel traditional myths and old wives tales.”

Aditmari has handled 35,000 successful deliveries with no record of maternal deaths, although 464 cases with complications were referred to larger hospitals.

Aditmari’s is just one of thousands of stories of efficient maternity services that are helping Bangladesh reduce MMR and increase skilled birth attendance.

The proportion of women delivering at a facility or with assistance from a professional birth attendant has increased from nine percent in 2001 to 23 percent in 2010 and may well reach the 50 percent target by 2015. However, some 2.4 million deliveries still happen at home, annually.

The directorate of health services (DHS), the key agency implementing reproductive health programmes in collaboration with NGOs like RDRS, holds that the key lies in training a cadre of community health workers who are now gradually replacing untrained or traditional birth attendants.

DHS chief, Khondhaker Shefyetullah, told IPS, “Maternal deaths are decreasing in rural areas as expecting mothers are now more conscious of safety and prefer delivery at professional hands rather than at the hands of untrained birth attendants.”

Arthur Erken, United Nations Population Fund (UNFPA) representative in Bangladesh, told IPS, “The decline in maternal deaths suggests that many pregnancies with complications are now being selectively sent to facilities, as intended.”

Erken noted a substantial increase in women with obstetric complications seeking treatment at a facility – 29 percent in 2010 compared to 16 percent in 2001. “This indicates that both awareness and referral systems are improving.”

Prof. Nasima Begum, secretary-general of the Obstetrical and Gynaecological Society of Bangladesh (OGSB), attributes a major part of Bangladesh’s success to trained community skilled birth attendants (CSBAs) who are in direct contact with villagers and play a vital role in MMR decline.

“About 12 percent of all deliveries in the rural areas are caesarean, which means that the CSBAs are properly identifying the risk cases and sending them to the right place for emergency deliveries,” Nasima said. “Earlier, expecting mothers with complications simply died for lack of professional guidance.”

Training programmes run by the OGSB receive support from UNFPA. The UN agency also provides support for improved facilities at the health centres in rural areas and for emergency obstetric care at some 70 hospitals.

There are currently some 7,000 CSBAs serving 10,000 community clinics across Bangladesh and more are being trained to fill up vacant posts in community clinics – the first tier of health and family planning services at the village level.