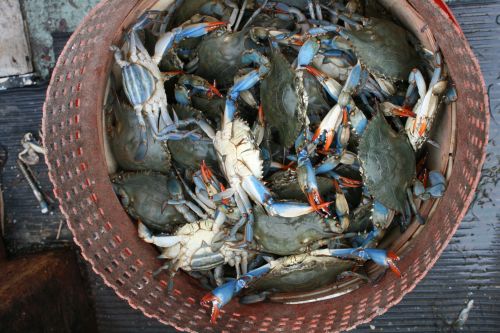 CRISFIELD, Maryland, U.S., Apr 25 2012 (IPS) - Authorities in Maryland and Virginia have rescued the Chesapeake Bay’s blue crab from the brink of collapse, tripling its population in five years, by using methods that emerging crabmeat-exporting countries in Asia and Central America could emulate, scientists say.

“There are a lot of things that you can do to reduce the catch in a fishery,” said Richard Robins, the chairman of the commission that regulates crab-fishing in Virginia. “But this was the first time we used them all at once.”

The result: 2010 was the Cheseapeake’s second-biggest harvest in 60 years of the hand-sized crabs whose Latin name, Calinestes sapidus, means tasty, beautiful swimmers, and 2011 came close.

Here in Crisfield, the self-described crab capital of the world, Dan Dize, a 33-year-old crab fisherman, now catches more crabs per pot. He admitted he was worried about rising fuel costs eating up his profits, but added, “I wouldn’t want to do anything else.”

After a day on the bay, he unloaded 3,500 live crabs packed tightly in 26 wooden baskets that would soon be heading for markets in Washington and New York.

For the second half of the 20th century, the crab population in the Chesapeake, the United States’ biggest bay that’s home to one of the world’s biggest crab fisheries, had oscillated around 400 million crabs, the average annual harvest was 250 million crabs. But in 1997, the population declined to about 130 million crabs and despite efforts to reduce the catch, up to 100 million crabs were still being caught each year.

“You can’t harvest 80 percent of anything year after year and expect it to last,” explained British-born Tom Miller, a fisheries ecologist who heads the University of Maryland’s Chesapeake Biological Laboratory.

While the population never collapsed completely, the drop of crabmeat supply led local companies that wholesaled Chesapeake crab to increase imports from Indonesia, Thailand, the Philippines and Central America of high-quality crab meat, which is picked by hand from steamed crabs, pasteurised and shipped under refrigeration.

“Crab and crabmeat imports into Baltimore went from 10.5 million dollars in 1995, when the Chesapeake harvest was starting to decline, to over 110 million dollars in 2011,” said Douglas Lipton, a fisheries economist at the University of Maryland.

“Now we’re hearing that while these Asian crab fisheries bring good income to their communities, the crabs are being taken faster than they reproduce, so that if they don’t act soon, they could experience the declines we saw in the Chesapeake.”

In many communities around the world, particularly those that depend on fishing, leaders are sometimes able to persuade local fishermen to fish less if a particicular fish population has visibly diminished.

But in most developing countries, the sampling equipment and know-how that Western scientists use to determine how a given population is weathering being intensely fished are generally lacking, making the kind of restrictions that led to the rescue of the Chesapeake crab less precise.

“The countries that import seafood, like the United States, need to export their expertise in fishing sustainably,” said Daniel Pauly of the University of British Columbia, perhaps the world’s most influential fisheries expert.

“In this case, foreign aid should take the form of sending American crab specialists to the exporting countries so they can scientifically assess how fast the crab populations are responding to increased harvests. Then they can come up with ways to prevent overfishing so the fishery can keep on benefitting everyone.”

“Getting people to fish less anywhere is very hard,” said Miller, the Maryland fisheries ecologist. “Usually you keep on rearranging the deck chairs on the Titanic and when it starts to sink, you impose a fishing moratorium, which is very disruptive to the communities.”

In the Chesapeake, the solution came after Robins, the owner of a seafood packing business, was appointed to the Virginia Marine Resources Commission in 2004. He realised that piecemeal efforts to curtail the catch weren’t working and called for a blue-ribbon commission to determine why.

Miller was the senior scientist on the panel, whose report came up with what he calls the “kindergarten solution”, so easy a five-year- old could have figured it out: “If there aren’t enough babies, stop killing the mommies.”

“We needed to save at least half the number of pregnant females that were being harvested, about 30 million crabs,” says Miller. “Overall, we wanted the harvest to be no more than 46 percent of the stock.”

A broad array of measures was put in place, with the reduction of the fall harvest of females migrating to the mouth of the bay in both states the most effective. A winter dredge fishery of buried hibernating pregnant females in Virginia was closed and a spawning- season sanctuary was extended, explained Robins, who helped coordinate the measures.

The local fishermen were not happy, but the spring 2009 survey of 1,500 spots up and down the bay found that the new restrictions had raised the female population by 70 percent, while the male population barely changed.

In 2010, the yearly survey showed females were up 200 percent from the 2008 level. A survey published in late April showed that this year, the total number of Chesapeake crabs is, at 764 million, triple what it was in 2007.

Meanwhile, added Robins, the fisheries official, the average price Virginia fishermen got for their crabs remained stable at two dollars a kilo between 2008 and 2010, while the amount of crabs caught rose by more than a third. He expects prices to go up again.

“We saw that when the scallop fishery recovered,” he says. “Demand increased and now prices are at an all-time high, and there’s three times more scallops being harvested now than in the 1980s.”

If Robins is right, prices will rise to offset Dize’s expenses, demonstrating that more often than not, saving a species from commercial extinction – the point at which it costs more to catch a fish than the fish can be sold for – benefits the fishermen who traditionally fight restrictions on their work.