Brazil Must Do More for Rio+20, Former Ministers Say

RIO DE JANEIRO, Apr 20 2012 (IPS) - Former ministers, lawmakers and environmental experts in Brazil are urging the government to take a more proactive stance to prevent the United Nations Conference on Sustainable Development the country will host in June from falling short of the standard set by the preceding summit. 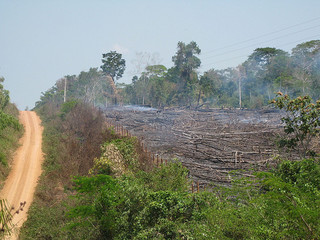 Deforestation in Brazil's Amazon jungle has slowed down in the past few years. Credit: Mario Osava/IPS

Called Rio+20 in reference to the 1992 Earth Summit conference in the same Brazilian city, the gathering “is an opportunity to keep the sustainable development flame alive and move forward on climate negotiations, and should not be diluted within a generic and unfocused development agenda,” says a document presented by the group.

“There is a high risk that Rio+20 may not just be irrelevant, but might actually represent a step backward from the achievements of the Earth Summit,” says the text, titled “Rio mais ou menos 20?” (Rio Plus or Minus 20?), presented Wednesday Apr. 18 in São Paulo at a meeting organised by the Centre for Integration and Development Studies (CINDES).

“In order to prevent Rio+20 from becoming ‘Rio minus 20’ the main challenge is to implement environmental goals, given the seriousness of the state of the planet,” environmental consultant Fábio Feldmann, a former legislator and former São Paulo state environment secretary, told IPS.

Scientific advances need to be taken on board “if humanity is to have a future,” he said.

The document’s authors, headed by Rubens Ricupero, who was minister of the environment and finance in the 1990s, say that “present production and consumption patterns are straining the natural limits of the planet.

“We should not stand by passively when this problem and all it implies for economic and social development strategies is being neglected in the agenda of a meeting whose very name indicates that its aim is sustainable development,” they say.

They also say “dramatic evidence for global warming, manifested in extreme climate events, is growing in Brazil and around the world, and the impacts, including economic effects, are already being felt in various countries and sectors.”

Physicist José Goldemberg, one of those who signed the document, is concerned that the pre-summit negotiations are neglecting this issue.

In his presentation in São Paulo, Goldemberg, a former education minister, environment secretary and science and technology secretary, emphasised that the number of environmental disasters has increased exponentially over the past three decades.

The most recent catastrophes in Brazil were torrential rains in early 2011 and January 2012, which caused flash floods and landslides and claimed lives in the steep and densely populated hillsides of Rio de Janeiro.

The authors of the document say the Rio+20 summit agenda is too “diluted” as it does not place the environment at the centre of debate.

Rio+20 organisers have taken the line that 20 years after the Earth Summit, there should be broader discussion of sustainable development, based on three pillars: social, economic and environmental.

Marina Silva, the first environment minister in the administration of former president Luiz Ignácio Lula da Silva (2003-2011), said development necessarily includes all three pillars, but “to say the environment as such should not be discussed is a setback with respect to the vision of the 1992 Earth Summit.”

Ricupero, an active participant in the preparatory Rio+20 negotiations, also expressed the view that it is a mistake to turn away from focusing on the environment.

The environmental pillar “is the essential condition” for the economic and social aspects, said Ricupero, who was secretary general of the United Nations Conference on Trade and Development (UNCTAD) from 1995 to 2004.

For instance, the expected increase in global temperature by at least two degrees Celsius is crucial. “If we fail to keep below that limit, no economic or social pillar can stand… This is about the foundation of the planet’s physical sustainability,” he declared in Sao Paulo.

Feldmann told IPS an industrial and economic policy capable of incorporating and encouraging the environmental dimension is needed.

The document’s authors propose that Brazil, as the host of the Rio+20 conference and as a country rich in agricultural, energy, water and forest assets, should take the initiative, set an example and take on a leading role.

They also call on the government of President Dilma Rousseff to design a set of policies for the transition to a low-carbon or green economy. They recommend adopting a system of competitive advantages to support this process and discourage economic activities that go “in the opposite direction.”

“The goal of a low-carbon economy must be translated into coordinated policies for industry, transport, energy, agriculture, trade and innovation that include incentives favouring sustainable investment,” they say.

Ricupero said Brazil pioneered a “green economy” energy programme, supporting the development of ethanol, a biofuel derived from sugarcane, which most of the nation’s vehicle fleet now runs on. “But that is as far as it went,” he complained.

Brazil is at risk of serious environmental failings if Congress approves a new forestry code that would grant an amnesty to those responsible for deforestation and strip the executive branch of the power to take essential measures, such as creating indigenous or environmental reserves, said Feldmann.

At the 15th Conference of the Parties to the U.N. Framework Convention on Climate Change in 2009, Brazil committed itself to reducing the country’s greenhouse gas emissions by between 36 and 39 percent by 2020. “It cannot now elude the responsibility of contributing, as host, to bridging gaps between participants’ positions and building consensus around ambitious goals,” the group says.

According to Feldmann, Brazil has taken great strides in environmental legislation, but “there is still too much deforestation in the Amazon and other ecosystems.”

Similarly, apart from some tax incentives for manufacturing energy-saving domestic appliances, no other initiatives with a “green tax stimulus” to motivate industry “to put sustainability into practice” have been adopted, he said.