AMMAN, Apr 27 2012 (IPS) - On a warm Friday afternoon, police cars blocked the roads around the Al Husseini mosque, where hundreds of men were kneeling for the noon prayers. At the end of the service, the crowds rose and marched in a compact protest behind a car bearing a banner for the Islamic Action Front (IAF), the Jordanian branch of the Muslim Brotherhood. 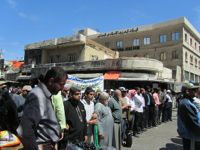 “With our blood, our soul, we sacrifice ourselves for Jordan,” chanted the crowd.

Such protests have become a weekly sight in the Hashemite Kingdom, but they have been relatively peaceful, contrary to uprisings in neighbouring countries.

“Protestors are slowly upping the ante, with slogans becoming more daring day by day,” observed Mohamad Masri, a political scientist at the Centre for Strategic Studies at Jordan University.

“Unfortunately the protests have failed to garner momentum: the opposition is fragmented, different groups have too many different grievances,” remarked activist Tareq Zureikat. The pro-democracy movement is a mix of tribal Jordanians, leftists and IAF followers.

The authorities have played successfully on these divisions. According to a recent report by the International Crisis Group, several demonstrations have been attacked by individuals resorting to explicitly divisive slogans and “seeking to stir up anti-Palestinian feelings or, in some cases, inter-tribal rivalry.”

For the most part, Jordanians of Palestinian origin have also remained on the sidelines of demonstrations, despite participation by the IAF, which has a large Palestinian base. “This can be attributed to the fact that Jordanian-Palestinians feel and act like they are guests in this country,” explained Masri.

Jordanian-Palestinians are those who were exiled from Palestine after the creation of the state of Israel in 1948 and amount to over 30 percent of the Kingdom’s population. Concentrated in urban centres, they are highly visible in the private sector.

Trans-Jordanians, on the other hand, constitute the tribal base of the regime and tend to dominate the public sector. Tribal patriarchs have been increasingly wary of the growing power of the entourage of Queen Rania, who is of Palestinian descent.

However, inter-communal rivalry is not the only factor preventing the pro-democracy movement from getting ahead. “There is an awareness among demonstrators not to follow in the footsteps of Syria,” said Adnan Hayajneh, a political scientist working at the Hashemite University.

Other fears include the possibility of a rise in Islamic fundamentalism. Last April, Islamist Salafist demonstrators armed with daggers and clubs attacked police in Zarqa, an incident that ignited the anger of the local population.

“There is a fear that the IAF, being the only organised (body participating in protests), would win far more seats than their share of votes if real and transparent elections take place. But a dialogue with the Brotherhood could lead to an agreement to cap the number of seats the organisation runs for,” pointed out Zureikat.

Masri estimates the IAF could obtain about 35 percent of total seats should such should free and fair elections be held.

Zureikat believes that allowing the opposition to regroup its forces is creating awareness among the population that their demands may not be so diverse.

Issues like corruption, which are the byproduct of a failing system, should have the power to unite disparate groups against a common foe.

“The problem of corruption will be solved by the separation of powers within the state, ensuring proper checks and balances, the creation of an independent judiciary as well as the establishment of a fair electoral law,” explained Zureikat. An independent judiciary would narrow military courts’ jurisdiction and the clout of the secret services, while guaranteeing accountability for corruption and human rights violations.

“The new electoral law published this month perpetuates the failing of the previous ones by favouring tribes instead of political parties and communal interests over national interests,” Masri said.

Though the regime introduced dozens of changes to the constitution last year – including the expansion of parliamentary powers, limitations to the jurisdiction of military courts and the enforcement of temporary laws in the absence of elected lawmakers – its response to the population’s grievances has been generally slow and inefficient, with authorities still appearing to bank on communal antagonisms.

Although Trans-Jordanians and Palestinian-Jordanians do not appear to voice unified protests, the fact that they are both dissatisfied with the prevailing order is in itself significant. “After all, a group that is heavily represented in the public sector and viewed as one of the system’s main pillars is taking to the streets,” Masri noted.

In response to increased popularity of Islamic movements in Jordan, lawmakers are currently discussing a law that forbids the establishment of any political party based on religious lines. It is a decision, however, that may have unsavoury repercussions on the Jordanian streets as disaffection with the monarchy continues to grow.

“There is increased questioning of the regime’s legitimacy and authorities need to restore confidence,” says Masri.