MEXICO CITY, Apr 9 2012 (IPS) - Agnes Torres, a transsexual psychologist and gay rights activist, left her home in the central Mexican state of Puebla on her way to a party. The next day, her body was found in a gully, naked from the waist down. Her throat had been slit. 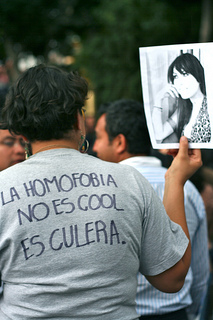 Three weeks after her body was found, the authorities closed the case, determining that the murder was not a hate crime but part of a violent robbery.

The police presented 160 pieces of evidence, along with the confessions of four suspects arrested for the murder.

The Puebla government says the only loose end in the case is the whereabouts of Torres’s partner, who is wanted by the police.

Torres was 28 years old and in the process of changing her identity in Mexico City, the only part of Mexico that has passed progressive laws such as the decriminalisation of abortion, same-sex marriage and a gender identity law allowing transgender people to change their gender and sex, under the left-leaning Democratic Revolution Party (PRD), which governs the capital.

She was also in the process of getting a degree at the University of Veracruz, which refused to recognise her new identity.

“Robbery might have been a motive, but it was clearly aggravated by transphobia, which besides homophobia has an added element: misogyny,” said Gloria Hazel Davenport, who worked alongside Torres in the project “Humana, Nación Trans”, aimed at achieving respect and dignity for people who undergo a sex change.

“The fact that we are transsexuals makes us more likely to be targeted as victims, because we don’t exist, since not having documents (with the new chosen name) makes us invisible in the eyes of the law,” said Davenport, who is also director of the Género, Ética y Salud Sexual (GESS – Gender, Ethics and Sexual Health) civil association based in the northern city of Monterrey.

“Agnes’s case had major repercussions because she was an activist involved deeply in the struggle for our rights. But there are many other cases that no one has ever heard about,” Davenport told IPS.

She and 17 others presented the Agnes Torres for Trans Dignity Self-Help Group on Wednesday Apr. 4.

Despite the investigation’s conclusion that it was not a hate crime, Torres’s murder in early March sparked growing concern about an escalation of homophobia in this country.

Between Mar. 10 and 12 alone, two homosexuals were killed in the same state where Torres was murdered. The bodies of Jorge Roberto Merchant, a 47-year-old public employee, and 37-year-old César González were found in their respective homes, with signs of torture.

The murders of Torres, Merchant and González bring the number of gay-bashing murders in Puebla to seven so far this year and 21 since 2005, according to the organisation No Dejarse Es Incluirse.

Suspects have been arrested in just one of those cases, Torres’s murder.

The situation is no better in the rest of the country. A report on homophobia-related hate crimes, “Informe de crímenes de odio por homofobia (1995-2008)”, presented in 2011 by the gay rights group Letra S said that 628 gay-bashing murders committed between 1995 and 2008 made Mexico the second-highest ranking country in Latin America for this kind of killing, after Brazil.

But experts say the real number of such murders is actually higher. They estimate that for every killing of a homosexual that is reported as a hate crime, two others go unreported.

“There is an institutional problem, because politicians, who send messages to society, should be the first to speak out against these crimes and promote tolerance for sexual diversity, especially during election campaigns, like now,” Gerardo Sauri, with the Federal District human rights commission, told IPS.

“But they are not doing that. In fact, patterns of mistreatment, misogyny and homophobia prevail in the government apparatus itself,” he said.

The legal reforms in favour of the LGBT (lesbian, gay, bisexual and transgender) community passed in Mexico City have not only faced opposition from society but from state institutions as well.

Two years ago, the Attorney General’s Office filed a complaint with the Supreme Court, seeking to have the Mexico City same-sex marriage law overturned, on the argument that it violated the constitutional clause on protection of the family.

In March 2011, the Senate approved the inclusion of the term “sexual preference” in article 1 of the constitution, in a list of grounds on which discrimination is banned. But when the reform was sent to the states for ratification, several state legislatures rejected it.

In Puebla, the legislature deemed that raising respect for sexual freedom to the level of the constitution was going too far, and the lawmakers only approved the inclusion of the term “differences.”

Two months later, Mexico’s conservative President Felipe Calderón modified a decree that he had approved in December 2009 to declare May 17 the Day of the Fight against Homophobia, renaming it the Day of Tolerance and Respect for Differences.

“There is government responsibility for these crimes at two or three different levels,” said Sauri. “The first is the judicial system, because the legal invisibility generates a structural problem: government bodies do not feel that they have to respect the right to sexual diversity.

“Another layer has to do with the perceptions of high-level officials. If they don’t send out signals of equality and respect, and of support for the fight against homophobia, it will obviously be more difficult to implement a legal framework,” he said.

A few days before Torres’s murder, a Youth Parliament met in Mexico City – a simulated legislative session aimed at promoting political participation among the young. A scandal was triggered by comments made during the session by Juan Pablo Castro, a law student from a private university who belongs to the governing right-wing National Action Party (PAN).

“What have the governments of the PRD in the DF (Federal District) dedicated themselves to? To destroying institutions, allowing ‘jotos’ (a denigrating local term for gays) to marry, and permitting abortions. We cannot let these people govern us,” said the young man, who later was forced to publicly apologise for his homophobic remarks.

According to Sauri, there is even a culture of homophobia within the Federal District government apparatus, and among leftist politicians. “The prevailing perception is that (homosexuals) are sick, perverted social deviants who pose a risk to the community and, above all, to the children,” he said.

After Torres’s murder, the Inter-American Commission on Human Rights urged authorities in Mexico “to conduct an investigation that takes into account whether Agnes Torres’s murder was committed because of her gender identity and/or her work defending the rights of LGTBI persons.”

The Puebla state Congress, meanwhile, was forced to accept the constitutional reform that it voted against in 2011.

There is much to be done in a country where four out of 10 people would not be willing to live with a homosexual, according to the last National Survey on Discrimination – which did not even include references to the transsexual community.

“The problem is that we are in a country choking on hypocrisy, where, as the violence increases, a big bubble is growing that is going to burst around those of us who are most vulnerable to becoming victims of crimes,” said Davenport.