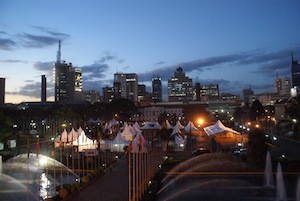 About 60 percent of Kenya’s power is hydroelectric, however, the supply is unsteady. Credit: Isaiah Esipisu/IPS

“It is situated 180 kilometres northwest of Nairobi, and will have a capacity to produce 1,600 MW of electricity by the time we implement all three phases in 2030,” said Simiyu.

According to Nashon Adero, a policy and economic analyst at the Kenya Institute for Public Policy Research and Analysis, the first phase of the project will have a significant impact on the country as it moves towards industrialisation.

“At the moment, the country consumes 1,600 MW,” Adero said. “Four hundred MW is therefore an additional 25 percent. And given that the country has embarked on other ambitious projects of green power generation, such as the Lake Turkana Wind Power project, which will generate an additional 300 MW, Kenya will become an economic giant within the region.”

Construction on the Lake Turkana Wind Power project will begin in June, and when completed it will be sub-Saharan Africa’s largest wind farm.

Generally, Kenya is perceived as eastern and central Africa’s financial, communication and transportation hub, with the country’s GDP increasing by four to five percent in the last 10 years.

“Kenya’s GDP is currently the largest in the (East African) region given its strong agricultural industry, particularly in tea and coffee production, and floriculture,” said Ezekiel Esipisu, Habitat for Humanity’s regional operations manager for East Africa and the Middle East. “This, coupled with investments at the Nairobi Stock Exchange and the manufacturing industry, means that the country is one of the leading economies in Africa.”

“All of Kenya’s neighbours have power deficits. The roadmap towards further power production will definitely boost development. We will see Kenya move closer to industrialisation, and it will become a real economic giant in the region.”

About 60 percent of Kenya’s power is hydroelectric, which is generated when falling water from a dam is used to drive turbines. However, the supply is unsteady, as Kenya has been subjected to perennial drought and erratic rainfall. And the power cuts have hampered the country’s growth.

From July to August 2011, the government was forced to implement power rationing after the water levels in the country’s major dams dropped. At the time Kenya was generating about 1,200 MW of power, while demand increased at an average rate of eight percent a year, according to the Ministry of Energy.

The 2011 power cuts reportedly cost the country over 96 million dollars. However, the worst period of power rationing was between 1999 and 2001, which resulted in an estimated loss of four percent of Kenya’s GDP – about 400 million dollars.

“Hydroelectric power generation is solely dependent on climatic conditions,” said John Omenge, the chief geologist at Kenya’s Ministry of Energy. “During a drought, for example, the water levels will definitely drop, reducing the amount of power generated.

“Geothermal power generation is therefore the answer. It is one of the most reliable methods of producing electric energy, because such sources are not affected by environmental calamities such as drought,” he said.

In volcanically active places like the Rift Valley region, water is pumped down an injection well, and then filtered through the cracks in the hot volcanic rocks. The resultant pressurised steam that is formed is used to drive turbines.

Kenya is the first African country to diversify into geothermal power. The country is already generating 209 MW of electricity from the Olkaria Geothermal Projects, which are located in the Rift Valley and are operated by the Kenya Power Generating Company.

And the Menengai Geothermal Development Project is just a small part of the country’s “Vision 2030”, a development blueprint that aims to transform Kenya into an industrialised and middle-income country by 2030 by generating 5,000 MW of electricity from geothermal resources at various sites across the country.

“Power supply is key to any form of development,” said Gabriel Negatu, the director of the East Africa Resource Centre at the African Development Bank. The bank is providing funding for the first phase of the Menengai Geothermal Development Project.

“This project is therefore crucial for a country like Kenya because it is becoming the economic heartbeat of the continent. It is due to such high prospects that the regional office for the African Development Bank is now based in Nairobi. Many other organisations are following suit, making the city a regional economic hub,” he said.