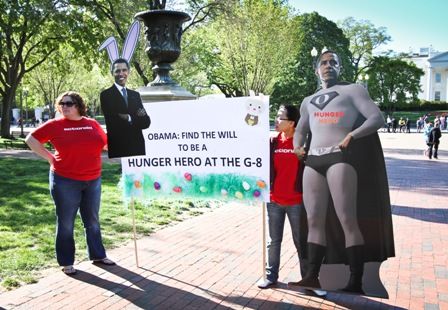 Hunger advocates call on President Obama to pledge a commitment to global hunger at the G8 summit. Credit: ActionAid USA

Sponsored by ActionAid USA, the activists held banners that read “Obama: Find the Will to be a Hunger Hero at the G8,” next to a cutout of the president in a superhero suit.

“This year, Americans are expected to spend over two billion dollars on Easter candy, according to CNN. We estimate that if the U.S contributed less than half that amount to a G8 food security initiative, we could empower 50 million smallholder farmers to boost themselves out of poverty through sustainable agriculture,” Katie Campbell, senior policy analyst at ActionAid USA, said in a press release.

“President Obama must do everything possible to find the political will and financial resources to combat hunger when international leaders meet at Camp David in May.”

The number of hungry people worldwide increased to historic levels due to the global food price and economic crises of 2007-2008. In 2010, the United Nations Food and Agriculture Organization (FAO) estimated 925 million hungry people in the world, with a vast majority of the undernourished living in developing countries, mostly in South Asia and sub-Saharan Africa.

In 2009, soon after new poverty figures showed one-sixth of the world was now hungry, the G8 declared the “L’Aquila hunger pledge” in Italy prioritising food security issues and committing 22 billion dollars over three years in support of country-led plans for agriculture.

The L’Aquila financial commitments are set to expire this May. In its place, anti-poverty advocates are calling out for a new financial pledge for a new food security initiative upholding the five “Rome Principles” set during the 2009 World Summit on Food Security.

“The Rome principles basically hold countries accountable for investing in country-led plans in a comprehensive, coordinated and sustainable way. We would like to see the Rome principles, not just as principles countries should abide by, but as the fundamental framework for a new food security initiative,” Campbell told IPS.

It’s also important to evaluate impact targets, Campbell added. Instead of just allocating a certain amount of money, the pledge should calculate how many people are reached when country investment plans are fulfilled.

The new suggestions are improvements over the shortcomings of the current pledge. A 2011 report by ActionAid found that two years after L’Aquila, almost two-thirds of the way through, only 22 percent of the aid had actually been spent. Despite the U.S. leading the way and promising transparency of progress, delivery of aid has been significantly slow, mostly attributed to delays in the Congressional budget process.

Some G8 members had even “deliberately inflated aid to agriculture figures” by including previous aid commitments and money used in non- agricultural sectors in their calculations.

Campbell thinks solutions to such problems, other than holding governments accountable, is to ensure long-term investments rather than year-to-year ones. “If we make six- or seven-year investments, countries don’t have to necessarily rely on congressional appropriation.”

Campbell says the pledge has been relatively successful in its Global Agriculture and Food Security Program (GAFSP). She just returned from Rwanda, where she witnessed GAFSP transforming the lives of farmers by building terraces on hilly land, increasing productivity tenfold.

Agriculture is the most effective way to drive economic growth in the world’s poorest communities, and women’s inclusion is considered paramount for any growth.

“We actually believe strongly that to pull people out of poverty and to improve food security is to invest in women smallholder farmers because women, especially in Africa, make up the majority of farmers and the majority of farm labour,” Campbell said.

Despite comprising 43 percent of the agricultural labour force, women in developing countries often lack access to resources male farmers have. By giving women access to credit, labour saving tools and so on, their impact in agricultural development can be multiplied.

“The second thing is climate resilience of agricultural practices. We are already seeing the impact of climate change in poor nations. So we feel it’s really important that any new investments in agricultural development need to be resilient to climate change and be sustainable,” Campbell said.