CAPE TOWN, South Africa, Apr 17 2012 (IPS) - More than three years after the start of the global economic crisis, which has had a considerable impact on African trade, investments and gross domestic product, investment prospects on the continent are increasing. 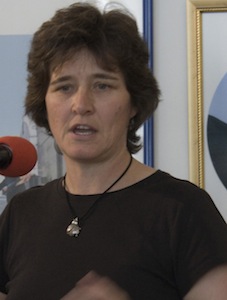 “There are a lot of interesting opportunities. Not only in mining, but also telecommunications, banking, mobile services and ICT (Information and Communications Technology). It is because those investments are able to traverse a huge space without needing infrastructure,” says Newton-King.

Four months into her appointment as head of the 123-year old stock exchange, the 44-year-old Cambridge and South African educated lawyer and financial services expert talks about her take on the latest African investment opportunities and risks.

Q: Are there opportunities for African countries, especially commodity-heavy nations, to benefit from the financial crisis?

Q: What level of political stability is necessary to attract foreign investment?

A: We are in a state of contested elections. That means policy directions are up for debate. From an investor perspective, that creates a huge degree of uncertainty. People are unsure if they want to make long-term investments until they know how certain a political environment is.

This is an issue for us in South Africa, in Africa, and for us as an exchange. We therefore spend a lot of time talking to government and the relevant policy makers to decide on core tenets of our policy direction, so everyone can relax into certainty mode.

On the other hand, there are investors who are quite tolerant of political environments. People will invest in Zimbabwe and in Kazakhstan, because ultimately, the money counts.

Q: In December 2010 South Africa was invited to join the Brazil, Russia, India and China (BRIC) group of emerging economies. Has this brought additional trade to the continent?

A: We definitely see a shift towards South-South and East-South, away from the West. BRICS and related opportunities are going to feature more in our lives than before. We expect to see larger portions of investment flows coming from the East and Brazil. Some big banks predict that by 2020, 40 percent of global wealth will be in BRICS countries.

Q: Does the JSE collaborate with other African exchanges?

A: There are 24 stock exchanges on the African continent, but some only trade 10 trades a day (while the JSE has at least 120,000 trades a day in its equities market). We are the elephant on the continent. Still, I would like to see a much deeper level of cooperation.

There is good communication between the different management teams of other African stock exchanges, for example with Nigeria and Kenya. There are a couple of things we are working on in terms of better cooperation, such as cross-linking products and sharing technology. But that does not translate into new business yet.

Q: Would it make sense to form a single African exchange?

A: It is not a goal we are pursuing. We have seen too many other attempts, big global mergers that have run into cross-border regulatory issues. We think we can achieve the same benefits if we work on cross routines and closer product diversity opportunities. That is where our efforts are going.

Q: In 2009, the JSE launched an Africa Board where the continent’s top companies can be traded, to promote African capital market growth. Has this been a successful strategy?

A: The Africa Board did not achieve what we wanted to achieve. We wanted to create a short-cut marketing segment to showcase African companies, but we have only 14 African companies listed today. We fully expect to get more, but it will happen over time.

Q: What is it like to be the first woman to head the JSE?

A: It is interesting. Sixteen years ago, when I joined the JSE, I would have been terrified to go close to the trading floor, because it was a pretty scary place for anyone in a skirt. Today, we have 500 people working at the JSE, and it is almost 50-50 female to male ratio, and my executive is seven to six, women to men. A diverse organisation attracts more diversity. There is a huge amount of strength in that.