FREETOWN, Apr 27 2012 (IPS) - Saffa Momoh Lahai was just two years old when his father was killed during Sierra Leone’s civil war. Rebels attacked their family home in Kailahun District, in the eastern reaches of the country, and shot Lahai’s father when he tried to resist. 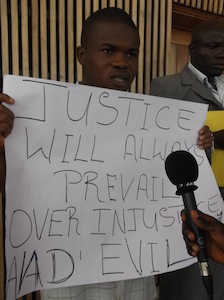 More than a decade later, Lahai went to the local seat of the Special Court for Sierra Leone in Freetown to hear the verdict read out in the trial of Charles Taylor, the former president of Liberia (1997-2003) who was convicted on Thursday Apr. 26 of aiding and abetting crimes against humanity and war crimes in Sierra Leone.

The verdict, which was read out by Judge Richard Lussick from The Hague, was televised live across Sierra Leone.

“I am so happy that Taylor has been found guilty,” Lahai told IPS after hearing the verdict, which was handed down in The Hague.

“It cannot bring back my dead father, but it feels good that justice has now prevailed over injustice and evil, and that makes me very happy.”

Many victims of the war in Sierra Leone were quietly pleased with the ruling, though the response was muted. Thousands across this West African country sat glued to TV sets or transistor radios to hear the court’s findings. Most simply went back to their daily lives after the verdict was read.

Haja Bintu Mansaray’s husband was killed by rebels in Koinadugu District, northern Sierra Leone, right in front of her.

“This verdict cannot bring back my husband, but my children and I can take solace from it,” said Mansaray, who added that she would never forget seeing her husband murdered.

Like many Sierra Leoneans, she said she has struggled to survive since the war, finding it difficult to pay her children’s school fees. While the conflict ended in 2002, the country has remained near the bottom of the United Nations Human Development Index, and much of the damage done is yet to be repaired.

Taylor was convicted of supporting the Revolutionary United Front (RUF), a rebel faction led by Foday Sankoh, which invaded the east of the country in 1991. The RUF unleashed 11 years of suffering on the civilian population, with mass amputations, rape, sexual slavery and the use of child soldiers characterising its campaigns. The RUF sought control of the rich alluvial diamond fields in the eastern part of Sierra Leone.

In Kono District, one of the longest-suffering regions during the war, survivors said they were happy with the guilty verdict, but were anxious to know what the sentence would be.

“I would give him a slow agony of a death, because he was the one responsible for the amputations, the killings, the destruction of lives and property,” said Eric Kellie, in Kono’s capital town of Koidu.

Kellie’s brother and mother were killed during the war, and his home was destroyed. More than a decade later, he is still trying to pick up the pieces.

“It has been very difficult for a long time,” said Kellie.

An estimated 50,000 people were killed during the war, with thousands more raped or suffering amputations. And since the war’s end, Sierra Leone has seen far less international support than neighbouring Liberia, which suffered a 14-year war after Taylor invaded the country with a small rebel faction in 1989. Taylor has not been indicted for any of the atrocities committed during the Liberian war.

Eldred Collins, the former RUF spokesman and current spokesman for the political party of the same name, said that Taylor was not to blame for the war, which he attributed instead to Sierra Leone’s long history of corrupt and unjust governance. In order to prevent another conflict, those conditions need to change, said Collins.

Abdul Rahim Kamara, director of Manifesto 99, a human rights organisation following the special court, said the trial had “sent out a loud and clear message, not only to Sierra Leone but to the whole continent: that the days of impunity are over.”

“This should be a warning to all sitting officials that one day they will be held accountable for what they do,” said Kamara.

In Freetown, Alhaji Jusu Jakka, the director of the War Amputees Victims’ Association, said he was “happy” and “relieved” after the verdict. But he pointed out that the Taylor trial cost a great deal when little has been done for the victims of the war. The trial reportedly cost 50 million dollars.

“The international community has spent more money on perpetrators, rather than victims, who suffered the atrocities perpetrated by these people,” said Jakka.

He said the judgment was a victory for victims, but he expected more reparations.

The verdict represents the first time a head of state has been found guilty of war crimes since the end of the Second World War. Taylor is the first former African head of state to be tried for crimes against humanity, and the case has been hailed as an end of impunity for African despots.

A sentence is expected on May 16. Taylor’s lawyers have said they will appeal.