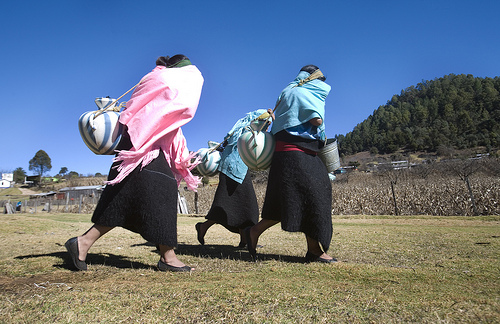 Women, like these indigenous women hauling water in Chiapas, Mexico, are often responsible for securing water for their families. Credit: Mauricio Ramos/IPS

MEXICO CITY, Apr 13 2012 (IPS) - So-called water schools, which educate communities on the resource and its links with the environment, gender and climate change, are helping to raise awareness on proper water management in Mexico, at a time of severe drought.

In recent years, projects of this kind have been set up in different parts of Mexico, especially in areas where water is scarce and measures to make water use more efficient are needed.

“We are training people to understand the relationship between water and gender, to influence public policies,” Araceli Díaz, the president of the NGO Calmécac, told IPS. “We assess the problems faced by different regions, and then design a water policy agenda.”

In 2011, Calmécac – named after the schools attended by the children of the nobility in the Aztec empire – set up a water school in the city of Taxco, in the state of Guerrero, 150 km south of Mexico City. Outreach workers from 12 surrounding municipalities are active in the school.

Because it suffers from chronic water shortages as well as pollution of water sources by gold and silver mining, that southwestern region is in need of special conservation and clean-up measures.

Mexico as a whole is highly vulnerable in terms of water supplies. And the situation has been aggravated by the effects of climate change, which in the medium to long term will threaten the availability of water, with negative impacts on food, agriculture, human health and biodiversity, experts from academia and civil society point out.

Besides the problem of pollution of groundwater, at least 100 of the country’s 653 aquifers are overexploited.

Water schools began to emerge in the decade of the 2000s in several countries of Latin America, due to the critical problems with water. The aim is to educate communities on the value of water, and instruct them in efficient, rational usage techniques. The schools also introduce new habits of water recycling, reuse and treatment.

In addition, they address the link between water and women, since in many communities it is women who are responsible for hauling, storing and distributing water, especially in areas where supplies are scarce.

These locally-based experiences “are important and valuable approaches, because the training and awareness-raising is carried out at a local level. Each local context has a very different set of problems,” Edith Kauffer, at the public Centre for Research and Higher Studies in Social Anthropology (CIESAS), told IPS.

“Both local capacity-building and government policies are necessary – they are complementary,” said the researcher, who lives in the city of San Cristóbal de las Casas in the southern state of Chiapas.

“The solution does not only lie in the hands of civil society. Governments have a role to play too,” she said.

Since 2011, central and northern Mexico have been hit by drought, which has caused significant damage to the agriculture and livestock sectors. And several studies forecast that northern Mexico will continue to suffer water stress in the long term.

In Mexico, 30 percent of households do not have piped water and 15 percent receive water through other means only every three days, according to the National Institute of Statistics and Geography.

One of the water schools operates in the town of Malinalco, population 25,600, in the central state of Mexico, next to the Federal District (the capital). Its work focuses on cleaning up the San Miguel river and improving treatment of sewage or blackwater, and greywater, which is wastewater generated by domestic activities like bathing and washing clothes and dishes.

“We carry out community work with the local population to raise awareness about pollution of bodies of water,” Macaira Vera, the head of the water school in Malinalco, told IPS. “The key has been community work, driving it home to local people that if we pollute the water, we are killing ourselves.”

The initiative promoted the installation of 125 household biodigesters – containers that convert organic waste into fertiliser and biogas – and the construction of four community plants to treat sewage that previously ended up in the river.

An office that provides advice on water, helping the local population work out specific water treatment and handling problems, was also established.

Each biodigester serves 18 families, and each plant has the capacity to process 1.5 litres of sewage per second. The organisation also carries out monthly analyses of water quality at the community plants and in local wells.

Heavily polluted by raw sewage and fertiliser runoff, the San Miguel river is the hub of the work of the water school, which identified 125 spots where sewage was dumped into the river in 2008.

“We decided to try to get these issues onto the public agenda; we formed online networks to communicate with each other and try to get incorporated into the spaces where these issues are discussed, and decisions are reached,” Díaz said.

In its assessments, Calmécac found problems of water availability and supplies, serious pollution, obsolete water distribution infrastructure, and a lack of citizen participation in decision-making.

The organisation is seeking funds to create a wetlands sewage treatment system – constructed wetlands that clean wastewater by filtration, settling, and bacterial decomposition – and to promote eco-techniques like rainwater collection and recycling.

It also foments family gardens, “to get people to change their consumption habits and learn to grow their own food,” and hydroponics – a method of growing plants using mineral nutrient solutions instead of soil – Calmécac’s Díaz said.

“The priorities are improving access to piped water, improving water quality, and tackling the enormous lack of sewage treatment,” said Kauffer, who is involved in research into the border rivers between Mexico, Guatemala and Belize, along this country’s southern border. “There are practically no rivers that aren’t polluted.”

Chiapas, one of the poorest states of Mexico, which is nonetheless rich in water, has around 25 sewage treatment plants, but half of them operate deficiently.

In Malinalco, in the state of Mexico, “pollution has been reduced, but the main problem is garbage,” Vera said. “There is less inorganic trash, but more organic waste. And water is scarce, not due to a lack of sources, but because of the poor distribution by the grid, which is very old.”

In 2010, the United Nations General Assembly approved a resolution declaring that safe and clean drinking water is a human right essential to the full enjoyment of life and all other human rights, and the U.N. Human Rights Council declared it legally binding.

U.N. member countries are thus legally obliged to amend their laws, to bring them into line with the U.N. General Assembly resolution. But Mexico has not yet reformed its general law on water.