MUDA, Nepal, May 7 2012 (IPS) - Social activists say that attempts to rehabilitate sex workers in this former monarchy call for special efforts to uplift the Badi, a Hindu caste that has for centuries been associated with entertainment and prostitution. 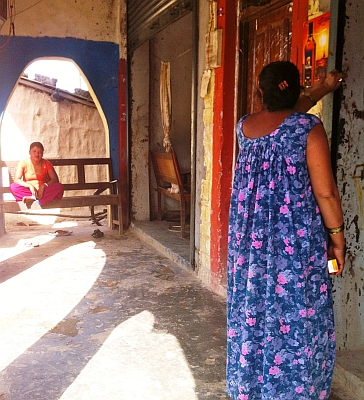 Sabitri Nepali was initiated into the traditional vocation of the Badis before she turned 14. Now, at 30, she is baffled by the changes taking place in a country struggling to climb out of a feudal past and transform into a modern, democratic republic.

“My family has survived on this trade for generations. My mother was a sex worker and I continued with the family profession. It was normal for us,” Sabitri tells IPS in this remote village in Kailali district, 700 km west of Kathmandu.

Badis, estimated to number 50,000, live in the western districts of Nepal but find work in the towns and cities of Nepal and neighbouring India, including Kathmandu, Mumbai and New Delhi.

Four years ago the Nepal government banned the Badis from pursuing their traditional occupation after it came under pressure from local communities fearing that the districts where there were Badi concentrations were turning into red light areas.

But, the government made no move to implement the ban, with the result that local communities formed monitoring groups backed by vigilantes that used violent methods to compel the Badis to give up their sole means of livelihood.

“We defied the ban and continued with our traditional occupation. How could we survive without incomes? Think about our children,” says Kalpana Badi,35, who like many others uses a surname that readily identifies her caste and her profession.

The word ‘badi’ is a corruption of the Sanskrit word ‘vadyabadak’, meaning one who plays a musical instrument, and suggests a degradation in the status of the caste over time.

South Asia’s rigid caste system once defined the occupation that people could engage in and Badis formed one group that has been unable to find its way out of an unfortunate position on the social ladder. “We didn’t want to continue with prostitution but the government has failed to fulfill its promises of rehabilitation,” says Bishal Nepali, husband of a Badi sex worker.

The government did announce a package that included housing, income generation activities and scholarships for Badi children, but these were never implemented.

“This has been a very frustrating process. We don’t know why the government has been so indifferent. The Badis are in a desperate situation,” says Uma Badi, a prominent activist and one of a handful of college-educated Badi women.

“Most Badis are uneducated and have no farms or livestock,” Uma explained.

Badis were denied citizenship until 2005 when the Supreme Court ordered the government to grant it to them and also extend financial support.

According to a study published in 1992 by Thomas Cox, an anthropologist then attached to Kathmandu’s Tribhuvan University, Badi girls “from early childhood, know, and generally accept the fact, that a life of prostitution awaits them.”

Badi girls, the study said, do not get married and commonly bear the children of their clients.

Cox recorded that upper caste Nepali society gives little encouragement to Badi girls to pursue other professions and those among them who enter public schools are “often severely harassed by high caste students.”

Two decades after Cox’s study, the Badis, as members of an ‘untouchable’ Dalit (meaning broken people) caste, are still not permitted use of the village water pump or well and their situation may have worsened.

In Muda village, many Badi girls and women have fled their homes fearing the Muda Anugaman Toli Samiti (a vigilante group) whose members have been accused of beating up Badis and their clients.

Badis are not allowed to run legitimate businesses. “People fear to buy anything from my shop because they fear the villagers,” says Dinesh Nepali, a Badi male who runs a small shop selling cigarettes, vegetables and soft drinks. “How can we survive like this?”

Badi activists are aware that they are prime targets for the United Nations Millennium Development Goals that deal with women’s rights, education and poverty, and that their uplift calls for extraordinary and determined initiatives.

“A handful of non-government organisations and donor agencies have been supporting the empowerment of Badi women, but that is not sustainable. Projects come and go but only government support can provide a long-term solution,” says Uma.

There were hopes that the abolition of the monarchy in favour of republican democracy, at the end of the bloody 1996-2006 civil war, would bring positive changes to the lives of the Badis, but Nepal is still coping with political instability.

“I have met three different prime ministers in the past few years,” said Uma. “They promise support but forget us as soon as we head back to our villages.”

In 2007, Badi activists threatened to march naked through Kathmandu to embarrass the government into implementing the court-ordered rehabilitation, but that brought nothing except more promises.

The local monitoring committees – that are backed by the vigilantes – admit that the government has failed in its promise to help the rehabilitation of the Badis.

“We are trying to help the Badi women start new dignified lives but we do admit that there are no viable alternatives,” says Riddha Bhandari, a leader of Muda’s monitoring group. “The government needs to act now.”

Bhandari denied that the Muda committee was out to destroy the Badis, but said there were worries over adverse influences on non-Badi girls and the possible spread of HIV/AIDS.