Q&A: Reviving the Spirit of Rio+20

Aline Jenckel interviews KIARA WORTH and IVANA SAVIC, co-ordinators of the Conference on Sustainable Development Major Group for Children and Youth

UNITED NATIONS, May 2 2012 (IPS) - In the weeks and months leading up to the Rio+20 summit on sustainable development, groups spanning a wide spectrum of interests are doing everything in their power to ensure that the outcomes of the summit are actually carried out. 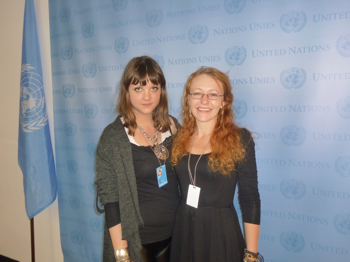 Ivana Savic, left, and Kiara Worth, co-ordinators of the Conference on Sustainable Development Major Group for Children and Youth. Credit: Aline Jenckel/IPS

One such group is the Conference on Sustainable Development Major Group of Children and Youth, which believes that strengthening youth involvement and activism is urgent and critical to the success of the United Nations (U.N.) Conference on Sustainable Development, commonly known as Rio+20, to be held this year in Rio de Janeiro from June 20 to 22.

Ivana Savic and Kiara Worth, co-ordinators of the CSD Major Group of Children and Youth, have high hopes for the summit and the results it could bring.

“We will see a renewal of the political will, and we would like to see youth being recognised more concretely in official documentation,” Worth told IPS, although she acknowledged that while she had “huge expectations, whether or not they will be achieved is a different thing”.

Worth and Savic also hope to see different forums established that will inspire, enable and motivate youth to participate in negotiations.

The period from April 30 to May 4 is the third informal week of negotiations on the zero draft of the outcome document for Rio+20. The negotiations are being held at the U.N.’s New York headquarters.

U.N. Correspondent Aline Jenckel talked with the women about the work of the youth organisation and their hopes for the Rio+20 summit as well as preceding negotiations.

Q: What are the main concerns of the CSD Major Group for Children and Youth? A: (Savic) What needs to be done during these negotiations (held at the U.N. this week), and I believe also for the Rio + 20 Summit, are adopting a human rights based approach to sustainable development and strengthening human rights in the outcome document.

(Worth) Within the themes of Rio+20, there are different policy points for which we are strongly advocating. Within the green economy, for example, we are promoting sustainable agriculture. The main line in the green economy is also youth employment, in terms of shifting from job seeking to job creation.

In addition, we advocate for more reflection on creating a blue economy and protecting our water.

Within the institutional framework for sustainable development, we campaign for the establishment of an ombudsperson for future generations to ensure that there is a high level of engagement of youth in global processes.

Q: What contributions will the Major Group bring to the Rio+20 conference in June 2012? A: (Worth) The two main things our group will bring to the summit are first, our policy contributions and second, the inspiration and motivation for youth activism.

At the moment, we are focused on a whole series of different groups that people can get involved in. We try to cater to a variety of youth around the world who have different interests, skills and abilities. We try to create a space where they can gather and share their ideas.

We build momentum and a social movement that is inspiring and reviving the spirit of Rio.

Q: The first step to build momentum for progress on current global challenges is to draw attention to the topic. How does your organisation inspire others to learn more about sustainable development, and how do you convince them to act? A: (Worth) Recently, we launched a social media strategy, for as youth we have a unique opportunity through access to new social media platforms and different tools to increase the scope of our message.

We are currently working on a strategy to use those different platforms to first create awareness – to inform people about the discussion, about sustainable development, about our focus. Second is to build capacity, once people gain knowledge about the topic, and give them tools to take action.

This builds a movement in two complementary ways: Local action takes into account global perspectives, while you ensure that the global process reflects local perspectives, thus taking into account the differing abilities of people and their diverse interests. You become much more effective.

(Savic) We also make sure it’s accessible to people who have fewer opportunities to participate.

Even if they are physically not there, at the U.N. or in Rio for example, they still have an influence because we have the technology and the ability to bring their perspectives to the table and to address those issues.

Q: What are your expectations regarding the outcomes of the conference and the commitments made by governments? A: (Worth) Touching on the inspiration of Rio, the main expectation especially from my perspective would be that we build that movement and the energy. It is not only about the policy, the dialogue or the official statements, it is about creating the energy and the sense of urgency and the sense of ability to move forward.

By achieving that, then at least we have a young, social, strong and empowered movement that can act on anything we decide to to.

(Savic) I expect us to move away from that materialistic development to a more human and well-being oriented development that actually respects the human rights, economic growth and also the respect owed to our environment.

For me, another important outcome of Rio +20 is forming partnerships between civil societies and governments in implementation. In previous times, due to the lack of that partnership, we were not able to meet agreements and commitments.

It goes the same for governments as for civil societies who were not participating in or held accountable for those agreements.