BRUSSELS, May 28 2012 (IPS) - The Traditional Courts Bill currently under discussion in South Africa’s parliament and due to be enacted by the end of 2012 could undermine the basic rights of some of the country’s most vulnerable inhabitants: the 12 million women living in remote rural communities across the country. 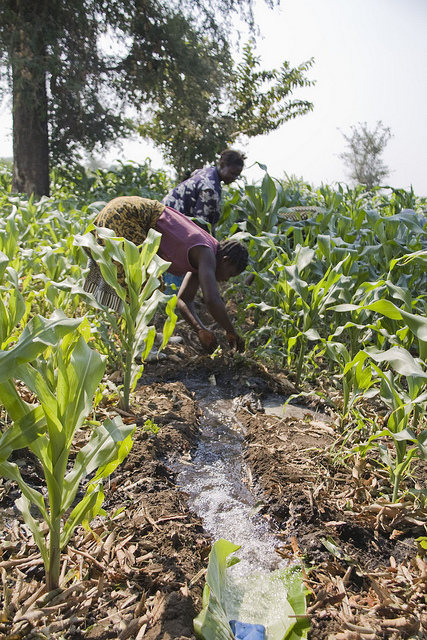 The Traditional Courts Bill currently under discussion in South Africa’s parliament and due to be enacted by the end of 2012 could undermine the basic rights of the 12 million women living in remote rural communities across the country. Credit: Kristin Palitza/IPS

The bill aims to “provide more South Africans improved access to justice” by recognising traditional authorities and laws. Through it, traditional leaders in remote areas would be given unilateral power to create and enforce customary law.

The bill sparked an outcry in 2008 when it was first tabled in the National Assembly. But with it due to come into effect at the end of 2012, civil rights groups are becoming increasingly vocal in their demand to have it declared unconstitutional.

The bill will allow traditional leaders to hear civil cases including disputes surrounding contract breach, damage to property, theft and crimen injuria or “unlawfully, intentionally and seriously impairing the dignity of another,” if such assault does not result in grievous bodily harm.

But many civil rights groups have slammed the proposed bill. According to Jennifer Williams, director of the Women’s Legal Centre in Cape Town, South Africa, the bill would “place all power in the hands of a single individual – in almost all cases a man – and effectively make him judge, jury and implementer.”

Not only does the proposed bill give a single individual the power to interpret custom in a particular community, it also forbids defendants from having an attorney – even in criminal cases. Furthermore, is does not allow the option to try the case in a mainstream court.

“The bill simply does not include any checks on the power of traditional leaders, nor does it hold them accountable,” says Williams.

Women in particular will be affected by the bill. And it has sparked a nationwide debate. Rights activist Siyasanga Mazinyo of the Rural People’s Movement in Grahamstown, South Africa told local newspaper the New Age on May 2 that the bill violated women’s rights.

The History of the Bill*

The Traditional Courts Bill was introduced to parliament in March 2008. In May 2008 the Justice Portfolio Committee called for submissions concerning the bill and held public hearings. At the public hearings organisations representing traditional leaders supported the bill.

However, the Congress of South African Trade Unions, the Council of Churches, the Commission for Gender Equality and various civil society organisations as well as organisations representing rural women and various rural communities opposed it.

The bill was withdrawn after the hearings, partly because of opposition, but also because there was not enough time to complete the legislative procedures required by section 76 of the Constitution, which requires the National Council of Provinces to follow a longer and more consultative process.

The 2008 bill was revived this year with the exact wording. The Department of Justice explained that it replaces the provisions of the Black Administration Act of 1927, which deals with the powers of chiefs and headmen to settle disputes and try offences.

The Black Administration Act was repealed in 2005, but these sections were extended pending the introduction of new legislation concerning traditional courts.

“In the past these traditional court processes were heard near the kraal (cattle enclosure) and according to our traditions, women are not supposed to sit near kraals.”

Many similar traditions are still in place today, Williams says.

“In reality this means that a man will represent her during the court hearing and she will have no impact on the hearing whatsoever. She will know her fate only once the judge has made his decision.”

Williams says that the Traditional Courts Bill is “clearly rooted in a patriarchal system.”

“Although it tries to use equal language by allowing men to represent women and women to represent men in the courts, it goes on to stipulate that this should be permitted only according to existing custom. Exactly herein lies the problem: custom in most places prevents women from appearing in courts and certainly does not permit them to represent men.”

She says that one of South Africa’s main challenges is how to harmonise custom with its current legal dispensation, and the bill fails to do this.

“It will take us back to a position where men will make and interpret custom in courts in a way that may not be consistent, clear or certain. Women and children (and other men) will be compelled to submit to the jurisdiction of these courts, regardless of choice. This will in effect create a second class of citizens,” Williams says.

The South African Commission for Gender Equality (CGE), an independent statutory body mandated to promote and protect the attainment of gender equality in South Africa, rejected the bill, saying it is fatally flawed.

“Numerous provisions within the bill are unconstitutional, and we have raised our concerns over issues relating to women’s representation and participation in traditional courts, and the impact this is likely to have on their constitutional rights to equality,” says Janice Hicks, acting chairwoman of the CGE.

The reality of tribal law would be harsh, as illustrated by the case of M*, a young woman from the country’s Xhosa ethnic group who approached the Women’s Legal Centre for assistance. The young woman was married when she was 14 to an older man who lived with his girlfriend and worked in Johannesburg.

Angered by her departure, her husband brought legal action in the local Magistrate’s Court demanding the return of his wife, as well as the lobola (bride price) he had paid and legal costs. After an intervention by the Women’s Legal Centre, this claim was dismissed with an order that the plaintiff pay the defendant’s costs.

If, however, the case were to be decided under the Traditional Courts Bill – as the remote rural area where she lived with her parents-in-law falls under such jurisdiction – things would have turned out vastly different.

“Firstly, under Xhosa customary law, when a wife separates from her husband and returns to her father, the husband is required to fetch her,” states Williams. “The father and husband may then also negotiate the terms of the wife’s return without consulting the wife.”

Customary law also considers the marriage of a 14-year-old legal, while under civil law the marriage would be considered invalid and the husband would be found guilty of statutory rape. The traditional court would also have requested the return of the bride price.

How could custom and constitution best be reconciled in the new South Africa? This remains a burning question to which the country’s leaders must find an answer before the end of the year when the bill is expected to become law.

The CGE recently met with Minister of Women, Children and People with Disabilities Lulu Xingwana, to raise concerns regarding the bill.

“She stated that the bill does not have a place in a democratic South Africa, and has publicly called for it to be withdrawn,” Hicks says.

As Jennifer Johnny of the South African Law Reform Commission stated in an interview on May 9 with Independent Newspapers: “If there is such a desire to regulate customary law, should we rather not have specialist courts which deal specifically with customary law, like the courts we have now that deal with maintenance and domestic violence?”

If the Traditional Courts Bill does get passed into law, Williams says that the Women’s Legal Centre will take the matter to court to have it declared unconstitutional.