SOUTH SUDAN: Bracing for a Massive Influx of Returnees 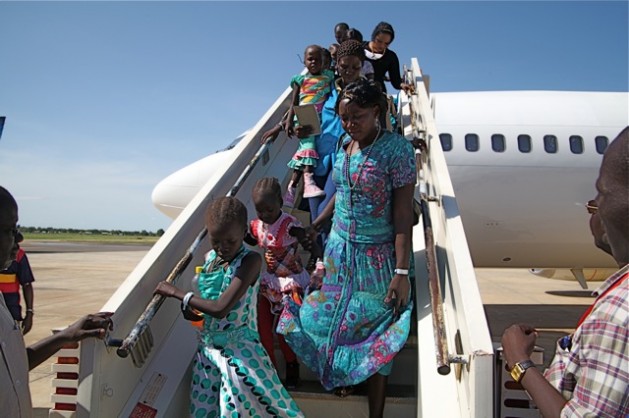 South Sudanese returnees arrive in Juba on one of the first flights of an airlift that will return 12,000 nationals. Credit: Jared Ferrie/IPS

May 18 2012 - In the wake of border tensions, the United Nations is airlifting 12,000 southerners from a Sudanese frontier town into South Sudan. But they are returning home in the midst of an economic crisis that has the U.N. warning it may appeal for more funding to scale up humanitarian operations.

Justin Sana Gonugu said he spent 35 years in the Sudanese capital, Khartoum. He decided to return to the south a year ago as South Sudan prepared for its independence on Jul. 9 but only made it as far as Kosti, a town along the Nile inside Sudan’s White Nile state. It lies about 270 kilometres from Khartoum and about 930 kilometres from Juba.

As Gonugu waited for transportation across the border, thousands more South Sudanese arrived during the following months and waited for their government and humanitarian agencies to bring them by barge down the Nile to Juba. But the barges were able to transport only a fraction of those arriving in Kosti, and thousands remained stranded as security deteriorated along the border.

Sudanese and South Sudanese forces have clashed intermittently since the south separated. But last month the countries almost went to war after South Sudan occupied the border area of Heglig, which is about 515 kilometres from Khartoum, which it said was being used by Sudan to launch cross border-attacks.

Although South Sudan claims the area as well, Heglig is administered by Sudan and oil fields there provide about half Sudan’s production. South Sudan withdrew on Apr. 20 after 10 days following a request from the U.N. Security Council. But Sudan continued to carry out bombing raids into South Sudanese territory and ground forces clashed.

Vincent Hourver, chief of mission for the U.N.’s International Organization for Migration, said the worsening security situation convinced authorities that they needed to airlift the returnees rather than continue using barges. Over the next few weeks the airlift will bring 12,000 of those trapped in Kosti to Juba, increasing to 1,000 arrivals per day.

“I am very tired. It was a year without food, without visiting our people,” said Gonugu after getting off one of the first flights on Wednesday, May 16. “I’m now very good, very good.”

Gonugu is one of about 375,000 South Sudanese to have returned since October 2010, and there are half a million more still in the north. Many more are expected to return, especially as tensions between Sudan and South Sudan have mounted in the past few months, causing fears they may face abuses by the Sudanese authorities.

A massive influx of returnees will put further strain on the increasingly fragile humanitarian safety net in South Sudan. Agencies are warning that a worsening economic crisis is driving up food prices, which will leave more people than expected in need of food aid this year.

South Sudan decided in late January to halt oil production after accusing Sudan of stealing 815 million dollars worth of its crude. Sudan said it took the oil to make up for unpaid fees. The two countries have been embroiled in failed negotiations to agree on how much the landlocked South Sudan should pay to use pipelines and processing facilities in Sudan.

South Sudan said it shut down oil production as a last resort, but the decision cost the government 98 percent of its revenue. Without income from virtually its only export, South Sudan has been relying on its foreign exchange reserves to run the country.

But the lack of dollars coming into the economy has had predicable results as the South Sudanese pound has rapidly decreased in value. The official rate is 2.95 to the dollar, but it has plunged to five pounds to the dollar on the black market from 3.5 in January. The cost of food and other items has spiked and the country faces a fuel shortage.

Lise Grande, the U.N.’s humanitarian coordinator for South Sudan, said the organisation had estimated that it needed 760 million dollars to cover humanitarian needs this year, of which it has received 32 percent. In the wake of South Sudan’s decision to halt oil production, U.N. agencies have been conducting a reassessment, which should be completed within days.

“We have every reason to expect that the amount of assistance that’s going to be required – if oil production doesn’t start – there’s going to have to be a bigger request from us,” Grande said.

Before the shutdown, the U.N. World Food Programme intended to provide 2.7 million people with food assistance, while agencies estimated that about half the country’s 8.26 million people would face food insecurity. That number is likely to rise along with food costs, Grande said. She noted that prices of basic commodities in border communities have risen as much as 200 percent.

Areas close to the border that relied on traditional north-south trade routes have been particularly affected by tensions between Sudan and South Sudan, which brought the countries to the brink of all out war last month. Sudan put restrictions on cross border trade even before the south seceded, but last month Khartoum imposed a state of emergency in border areas, tightening trade even further.

The scarcity of fuel has also put pressure on aid organisations, said Helen McElhinney, a policy analyst with Oxfam International. The agency is delivering water and sanitation to 37,000 refugees in Jamam camp, near the border with Sudan.

“Since January, the price of petrol has soared more than 100 percent,” she said. “Agencies will continue to meet humanitarian needs, but rising prices are making an already challenging response even more difficult.”

“Many are traumatised, and an increasing number of children are malnourished,” said Grande. “Refugees tell us that they are coming to South Sudan because they are hungry.”

On Tuesday, May 15, aid groups including International Rescue Committee and Refugees International released a joint statement warning that the humanitarian situation is likely to get even worse. The groups called for an end to the conflict in Blue Nile and Southern Kordofan, and urged South Sudan and Sudan to make a peace deal and repair their failing economies.

“A toxic combination of conflict, rising food and fuel prices, and severe cash shortages is having a devastating effect on the civilian population in both countries,” said Jon Cunliffe, South Sudan Country Director for Save the Children.