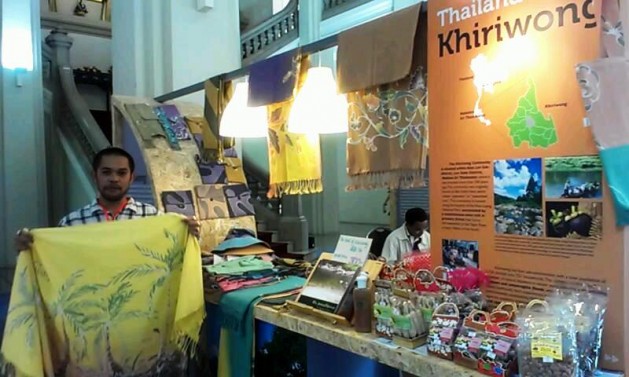 BANGKOK, Jun 21 2012 (IPS) - The Kiriwong community in southern Thailand is confident of handling climate change, thanks to lessons learned from a natural disaster that hit its village 25 years ago.

In 1988, a massive landslide triggered by floodwaters cascading down from southern Thailand’s high mountains hit the foothills where the Kiriwong village of about 400 habitants was located. The whole village went under mud that uprooted trees and killed at least 13 people.

The Kiriwong were left to rebuild their agricultural economy from scratch – but rebuild they did, defying government suggestions that they relocate the village to a safer place.

“We chose to remain in our ancestral place,” village head Yongyuth Krajangroj said at a seminar held by the Asian Public Intellectual programme (API) of the Nippon Foundation in Bangkok earlier this month.

“Since that disaster, Kiriwong village has expanded and it now has a population of more than 3,000,” Yongyuth told community leaders and climate change experts at the seminar.

Yongyuth later told IPS that the community plans to apply the same  traditional agricultural practices that brought their village back to life to fight changes in climate that now threaten their livelihood.

According to Yongyuth, recognition that the 1988 disaster was as much manmade as it was natural guided the new strategy. The landslide was caused by heavy rain, but it was aggravated by the villagers’ logging practices.

For generations the villagers had relied on a mixed-orchard plantation system conducted on the foothills and supplemented by collecting of forest produce. But the arrival of modern equipment such as chainsaws led to rapid forest encroachment and indiscriminate logging.

Kiriwong villagers now have a healthy respect for the idea of community management in preserving   the ecological balance and sustaining livelihoods.

According to Yongyuth, the villagers returned to organic, mixed-orchards to preserve soil and water quality. They also devised a system of monitoring by which villagers actively prevented forest encroachment.

A number of village groups promote eco-balanced solutions to different aspects of people’s livelihood. Among these  are eco-handicraft and eco-tourism groups that aim to generate supplementary income for the villagers.

An active youth group has been working with village youngsters to raise their awareness of such issues as cultural heritage and environmental protection.

One of the key players in promoting eco-balanced agricultural practices in the village is the local ‘Agriculture for Environment’ group.

Talking to IPS over phone from his village, group leader Wirat Treechot said that well before the disaster struck, mixed-orchards, a type of agricultural practice that allows farmers to grow several vegetables and fruits together, were in vogue.

Reconstruction after the 1988 disaster helped revive community orchards which are now known for their top-grade durian and mangosteen crops.

The emphasis on ecological balance in the community also helped build up  a capacity to withstand severe natural disasters over the past 24 years so that Kiriwong is now a self-reliant, food-secure community.

Wirat, however, pointed out that all this was no guarantee of a secure future and that the community still needs to adjust itself to the impact of extreme weather changes in an area with a peculiar geography.

“We are located in a mountainous strip sandwiched between the Andaman Sea on the west and the Gulf of Thailand on the east,” Wirat explained.

“Lately we have been experiencing rain and heat coming in from the Andamans, which is unusual. This started a few years back but the trend is worsening and impacting agricultural production,” he explained.

Wirat said extreme climate changes were now occurring within the space of a day.  “For example, high temperature that changed to heavy rain and then strong wind can happen within a day.”

The impact in Kiriwong is not all bad, though.  The  mixed-orchards are bearing fruit twice a year instead of one, though there are fewer fruits in the regular season.

The unpredictability of orchard production has led to income uncertainty in  village households. Some villagers have switched to non-traditional crops like rubber with indifferent results that have added to the uncertainty.

While Kiriwong villagers are looking for solutions they are comfortable with their existing way of life says Korkaew Wongpan, a researcher and API fellow who had been visiting  Kiriwong since 2008.

“Very few people want to leave for a job elsewhere,” she said. “The Kiriwong are a happy and self-reliant people who are very proud of their heritage and way of life.”

The self-reliant system, used by the Kiriwong community, in which people and groups closely support each other is a good survival strategy, says  Prasart Meetaem, an energy and environmental expert from Songkhla Nakarin University in south Thailand.

According to Prasart, Kiriwong village has lessons for people across Thailand and communities around the world.

What the future holds for Kiriwong as a result of climate change is  unpredictable, Prasart said. “There could be good results in some areas and more studies must be done in order to create proper responses.

“This is even more important for the poor, as we all know that every time a massive disaster strikes it is the poor who lose the most.”

Wirat stresses the importance of collecting data and transferring knowledge  on ecological preservation. “Several communities throughout the country have been successful in applying traditional methods to protect their environment and handle climate change effects well.”

One such instance in Thailand is that of people in Samut Songhkram province giving up  industrial-scale shrimp farming – which provied disastrous for the ecology – and returning to small-scale shrimp culture.