Establishing Environmental Flows in the Zambezi

HARARE, Jun 8 2012 (IPS) - When Jose Chiburre was a boy growing up in Mozambique, he would often challenge his friends to a swim across the Incomati River. That was in the 1970s, when the river was 300 metres wide in the dry season: today, the race would be over before it begins. 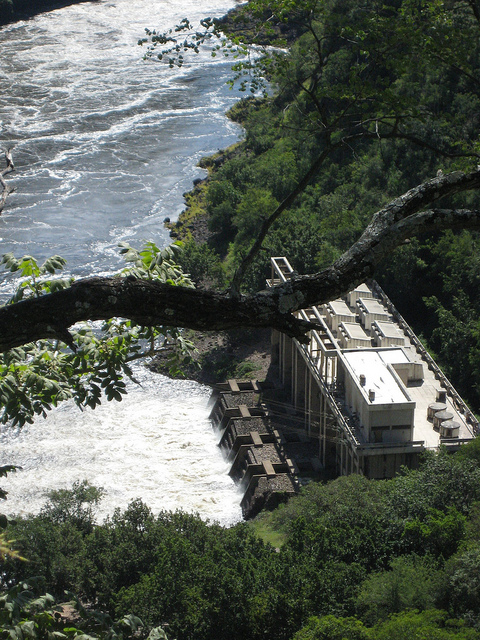 “In those days, we would compete against each other in swimming, but not anymore. The river can’t support any swimming in the dry season, because the levels are very low,” says Chiburre.

Forty years ago, the Incomati flowed through the Magudi District of Maputo, where Chiburre grew up, in majestic splendour, more than 700 metres wide during the wet season. Now, except during extreme flooding, the river broadens to a little more than half that width during the rains, and dwindles to a trickle during the dry season.

Chiburre, who now works as an environmental researcher in the Zambezi River basin, attributes the lower water levels in the Incomati River to increased demands upstream, where thousands of new arrivals draw water for irrigation, domestic use and livestock.

The diminished river can no longer support the diverse aquatic plant and animal life that it used to. Raphia australis, a palm naturally occurring only along the Mozambican side of Incomati River, is on the verge of extinction, while a number of bird species including the Wattled Crane, the Black-rumped Buttonquail, the Blue Swallow and the Yellowbilled Oxpecker have all been classified as endangered species.

While the other species cling to life elsewhere, the Incomati is the only habitat for the raphia australis.

The roan antelope (Hippotragus equines) and wild dogs (Lycaon pictus) are among the endangered animals in the Incomati basin.

Chiburre works for the World Wide Fund for Nature in Lusaka, Zambia, as the programme leader for the Joint Zambezi River Basin Environmental Flows Programme.

Maintaining environmental flows – the quantity, quality and annual cycles of water needed to maintain a river’s ecosystem – is among the priorities of the Zambezi Watercourse Commission (ZAMCOM), the organisation responsible for coordinating water management throughout the Zambezi River basin, which is shared by Angola, Botswana, Zambia, Zimbabwe, Malawi, Tanzania and Mozambique.

“At the moment, we are trying to bring all stakeholders to see if it’s possible to establish environmental flows in the Zambezi river basin,” he tells IPS.

Phase One of the programme, which will conclude this month, focused on establishing baseline data for just three of the eight Zambezi states: Zambia, Zimbabwe and Mozambique. Phase Two will be scaled up to other member states.

“We really pay very little attention to the environment (as users of water) compared to the other users,” Chiburre said.

One of the immediate impacts of this inattention in the Zambezi has been the drying up of some wetlands, particularly in the Lower Zambezi Wetlands in Mozambique.

“They are drying out due to lack of water,” he said.

Chiburre adds that people in the Zambezi’s flood plains have also reported declining yields, as reduced seasonal floods affect the amount of water and nutrient-rich silt deposited each year.

“So if you don’t implement environmental flows, you damage the social fabric. People resort to unsustainable practices for survival, and this breeds conflict – either with nature or with fellow human beings.

“Yet, these are the species that bring ecological balance in the ecosystem. They are the basis for the living of the people; people live on those plants, animals and interact with them in balancing nature.”

Michael Mutale, executive secretary of the ZAMCOM Secretariat in Gaborone, says the Zambezi basin’s environmental flows programme is an integral part of the Commission’s focus on improving effective management of natural resources for sustainable development.

“We are seeking to manage ecological and economic functions of the wetlands, control water pollution from point sources, control aquatic weeds, as well as promote sustainable fisheries management towards regional food security; which is where the environmental flows programme becomes very effective.”

There are many factors – dams, agriculture, mining – that impact on the flows of the mighty Zambezi, but it has not yet been transformed to nearly the same degree as the Incomati. And the memories of a boy who grew up in Maputo’s Magudi District may be one of the keys to protecting the integrity of this 3,000 kilometre river.