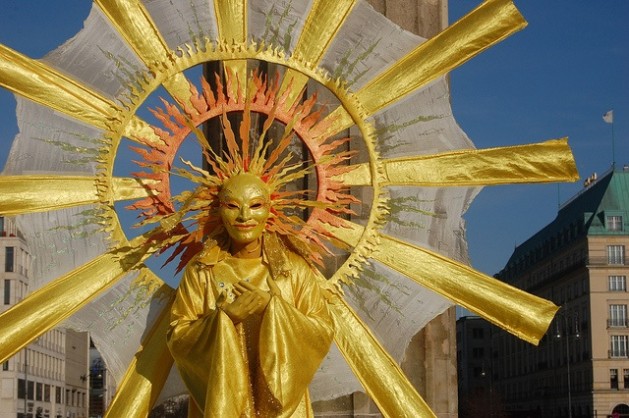 At a protest to support solar energy at Brandenburger Gate in Berlin. Credit: Daan Bauwens/IPS

BERLIN, Jun 10 2012 (IPS) - When the German government decided last year to phase out nuclear energy by 2022, following the catastrophe at the Fukushima power plant in Japan, it was clear that the process would require extraordinary effort, not only in further developing alternative energy sources, especially renewables, but also in upgrading the country-wide electricity grid.

Germany’s nuclear power plants generated a steady 20 percent of the total electricity consumed in the country last year. But renewable energy sources such as wind and sun are mainly generated in the north of the country, are prone to fluctuations, and need to be transported and managed by a new smart grid.

Consequently, the German government was set to install some 1,800 kilometres of new, high voltage power lines across the country by 2012, to improve the storage capacity of the present grid.

Despite the urgency, only 214 kilometres of new power lines have been installed as of Jun. 7.

Germany is one of the largest industrialised countries in the world to have officially renounced nuclear power. Other smaller European states, such as Italy, Belgium and Austria, have also pledged to phase out nuclear power or refrain from building new nuclear plants.

However, in order to truly move towards dependence on renewables, official figures estimate that Germany would need at least 3,800 kilometres of new power lines by 2022. This new grid is necessary to transport the wind energy generated in off-shore farms installed in the North Atlantic Ocean to the highly industrialised southern regions of the country, especially Bavaria and Baden Wuerttemberg.

In addition, at least 4,400 kilometres of the existing grid must be upgraded in that same period. In all, the new grid should cost some 32 billion euros, roughly 40 billion U.S. dollars.

Given the extraordinary boom renewable energy sources have experienced in the country over the past decade, the present inefficient grid constitutes the bottleneck of Germany’s energy revolution.

On a sunny, spring day in May, the country’s installed solar energy panels alone generated almost 75 percent of the daily electricity demand. On May 28, and the weekend before, the photovoltaic panels installed across Germany generated some 22,000 megawatts per hour, while consumption reached 28,000 MWs.

“In the face of this enormous amount of electricity generated, the present grid, which does not have sufficient storage capacity and cannot efficiently transport electricity, constitutes our main problem,” Helmut Jaeger, managing director of SOLVIS, a leading solar energy equipment manufacturer, said during a conference in Berlin on Jun. 6.

This deficiency of the grid also forces operators of wind turbines to shut them off for long periods of time, if the instant demand is not high enough to immediately consume the electricity generated by the wind farms.

To make matters worse, Germany has recently been on the brink of suffering power blackouts, after having shut down its oldest seven nuclear power plants. This past winter, during some periods of high consumption of electricity and low generation of wind and solar energy, Germany had to import electricity from neighbouring countries, especially from France.

Jaeger said that this risk continues, and could worsen if the coming winters turn out to be colder and longer than the one of 2011-2012.

One of these schemes is the so called ‘energy butler’, an electronic device able to coordinate electricity demand and supply, according to instant prices, of small neighbourhoods already using photovoltaic and wind turbine installations, or of local combined heat and power stations.

“The most efficient way to use renewable energy is to consume it locally and immediately,” said Thomas Wolski, manager of a model local smart grid in the city of Mannheim, some 500 kilometres southeast of Berlin.

In the model of Mannheim, neighbouring houses using solar panels are linked to each other, in clusters of energy-efficient urban units. “The energy butler analyses the present supply of electricity and its price, compares it to the potential demand in the urban unit, and decides whether to start operating washing machines or temporarily shut off refrigerators and heating systems, in order to optimise consumption according to prices and supply,” Wolski told IPS.

In other schemes, industrial refrigerators are used as storage devices in periods of high supply of renewable energy, when electricity prices are low. This is the case for fisheries in the city of Cuxhaven, just 20 kilometres inshore of the North Atlantic Ocean.

In a small-scale smart grid, which encompasses 650 households, one communal swimming pool, several refrigerated warehouses, and combined heat and power stations, the local energy provider EWE has developed a cluster of generation and storage facilities.

“When the wind turbine parks installed off-shore generate high amounts of electricity, we cool down the refrigerated warehouses to extreme temperatures, and use them as accumulators,” Tanja Schmedes, managing director of EWE’s project, told IPS.

“Actually, we need temperatures of only minus 21 Celsius in the warehouses,” Schmedes said. “When wind energy is low, we release the stored energy from the refrigerators to the community.”

Such models are not enough to manage the enormous amounts of electricity the grid has to coordinate for Germany’s heavy industrial sector. Additionally, the present power lines are unable to efficiently transport electricity over hundreds of kilometres, said Stefan Kohler, director of the German Energy Agency (DENA), the semi-governmental office coordinating the exploitation of renewable energy sources and smart grids.

Kohler said that by 2020 at the latest, Germany must utilise at least three high-voltage direct current power lines “from Schleswig Holstein at the Baltic and North Atlantic Sea down to Bavaria”. Each one of these lines would be 900 kilometres long.