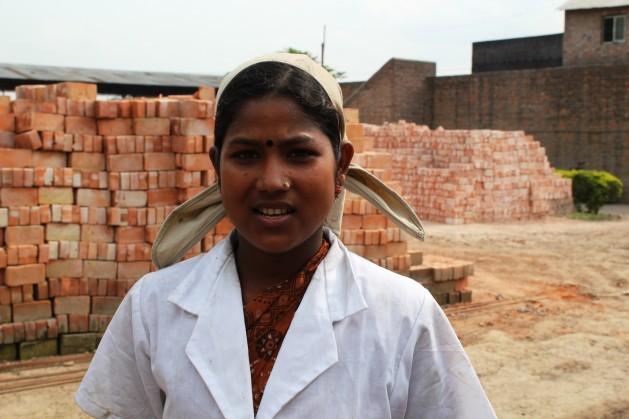 Shumi attends school and does shifts at a brick factory. Credit: Naimul Haq/IPS

But this factory in Savar, 35 km outside Dhaka, is no ordinary brick kiln. It is a Hybrid Hoffman Kiln (HHK) which uses modified German technology that drastically cuts down the smoke and soot associated with firing blocks of clay into bricks.

HHKs also use semi-automatic machines that do away with heavy manual labour, allowing women to be employed in brick-making in large numbers.

Since production started at this demonstration unit last year, many of the women in nearby villages  have switched from being low-paid farm labourers to skilled brick makers.

Says Salma Begum, 34, from the nearby Bhatiakandi village: “I used to toil nine hours at a stretch daily on a potato farm just to earn about 1,400 Bangladeshi taka (17 dollars) a month.

“Now, working six hours daily as a supervisor at the loading section of this modern brick factory, I earn 64 dollars as monthly salary.”

Rehana Begum, 42, a former labourer at a nearby vegetable farm, says her life changed after she took a five-month training stint at the same brick field.

About six months ago, Rehana and her husband, Motin, signed on as regular workers. “My husband and I together make about 120 dollars a month, enough for my family of six that includes my mother-in-law,” she tells IPS.

It was in 2010 that the United Nations Development Programme (UNDP) in Bangladesh introduced new brick making technologies to replace the polluting fixed chimney kilns (FCK) that release large  amounts of carbon into the atmosphere.

Traditionally, the brick industry in Bangladesh was unregulated, ran  during the six dry months of the year and depended heavily on male bonded labour.

The women are happy to learn new skills. “I joined as an apprentice three months ago after five days of training at the factory. I learnt how to operate some of latest machines and make good quality bricks,” says Shahera Begum, 27.

Md Murtoja Ali, marketing manager of CEA, told IPS: “Women are preferred in certain sections where heavy work is not involved and where they perform far better than their males because they have more patience.

“We give opportunities to all the women living in the nearby villages so that they get some experience. About 82 of the women are on short-term contracts which allow them to take time off to attend to family matters and return when they can.”

“Because I get a one-hour lunch break I can go to my home in nearby Ganakpara village to cook for the family and be back at work on time,” she tells IPS.

Shumi, 16, a school girl from Ganakpara village, says she works at the production line and attend school between shifts. The youngest worker at the factory, Shumi earns 56 dollars a month and plans to continue with her education.

“My supervisors have been very generous. Because of such worker-friendly atmosphere we enjoy working here,” she says.

The factory, built at a cost of 841,575 dollars, has modern facilities like changing rooms, clean toilets and rest rooms.

“All workers are required to take a shower after completing their shifts, and those who work near the hot oven chamber are also required to drink oral rehydration solutions,” says Kabir Hossain, a manager.

“The idea of short-term employment is to have pool of trained workers available in the surrounding villages at all times,” Hossain explains.

Also, when the project ends in 2014 and it is handed over to the owner he will not face any shortage of workers, says Khondker Neaz Rahman, project manager of ‘Improving Kiln Efficiency in the Brick Making Industry, to IPS.

The UNDP-funded pilot project currently has four such factories in operation, two in Savar and one each in Natore and Gazipur districts, all of them designed to transfer the technology and produce skilled manpower.

“There is tremendous enthusiasm among the workers to learn how to operate the machines and earn money,” says Neaz adding that there is a proposal to open a formal training centre.

The new factories have provisions to allow women to breastfeed infants and run routine health checks of the workers. Fire drills are carried out every month and attention paid to safety.

Mosammet Khadiza, 35, from Ganakpara, is appreciative of the discipline. “We are not allowed to gossip during production but we have tea breaks to relax and freshen up.”

Kabir said, “Any worker feeling sick can always seek permission to take rest or go home. We can always replace him/her with extra hands who are usually prepared to work on short notice.”

Mizan ur Rahman, president of Bangladesh Brick Manufacturing Owners’ Association, told IPS that the new system of recruitment and the modern equipment are welcome because they greatly improve productivity.

“We prefer skilled women workers because they tend to be more efficient and far easier to manage than male workers,” Mizan said.

Monwar Islam, director-general of department of environment, told IPS, “We want to see more women working in this industry. In fact, we are in the process of formulating a policy to encourage women to find jobs in brick making.”

Things are expected to improve further after the government stops renewing existing licenses on factories that have not adapted to the new technology by September and implements a complete ban on all FCK brick factories a year later.