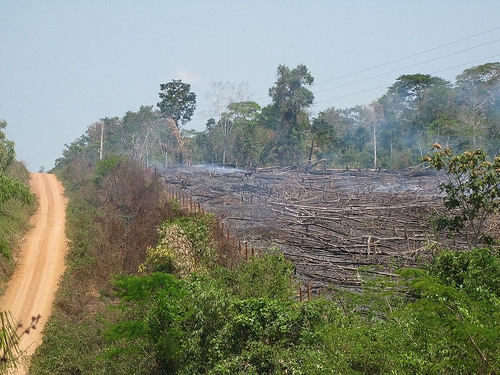 Slash-and-burn clearing in the rainforest in the Brazilian state of Acre. Credit: Mario Osava/IPS

RIO DE JANEIRO, Aug 24 2012 (IPS) - A new system to calculate the amount of greenhouse gases generated by deforestation in Brazil’s Amazon jungle region has come at a good time for assessing the effects of the reform of the country’s forest code.

Carbon dioxide (CO2) emissions caused by deforestation in Brazil’s Amazon rainforest fell 57 percent between 2004 and 2011, as a result of a reduction in logging, according to statistics released Aug. 10 by the Brazilian National Institute for Space Research (INPE).

In the same period, deforestation in the rainforest was reduced by 78 percent.

Illegal logging in the Amazon jungle peaked in 2004, when 27,700 square kilometres of forests were cleared. But by 2011, the total had dropped to just 6,400 square kilometres, according to INPE, thanks to stepped up monitoring and oversight of logging companies, forest fires and inadequate soil use.

Last year, the Amazon region released into the atmosphere 401 megatons of CO2 emissions, down from 953 in 2004, INPE reported.

This data was obtained by the newly launched INPE-Emission Model (EM) system which, as the co-author of the study, Jean Ometto, explained to IPS, takes into account new elements that make the calculations more “representative.”

The method takes into consideration phenomena related to deforestation and activities on land cleared of forest, such as agriculture and cattle-raising.

It also looks at other processes linked to the destruction of forests and to CO2 emissions, such as logging, the slash-and-burn technique used to clear land for farming, the decomposition of organic matter, and secondary plant growth.

“What changed in this model is that it takes into account different processes associated with deforestation that play a role in the quantity of carbon emitted into the atmosphere,” Ometto said.

The methodology uses information from the scientific literature and maps of biomass and land use.

But it also uses data from INPE’s Programme to Calculate Deforestation in the Amazon (PRODES), based on the analysis of pixels in satellite images, which indicates whether or not a certain area has been deforested.

According to Ometto, systems that do not include all of these elements to estimate the emissions caused by deforestation show higher rates of reduction of greenhouse gas emissions.

Judging by the old method, for example, the reduction of CO2 emissions between 2004 and 2011 would be 74 percent, instead of the 57 percent estimated with the new method, the coordinator of the Institute for Democracy and Sustainability (IDS), Bazileu Margarido, told IPS.

“The new system is reliable and represents a step forward,” since the aim is to assess whether greenhouse gas emissions increased or went down, and not only to determine which areas have been deforested, he said.

The traditional method treats the Amazon jungle as a homogeneous whole, “while there are actually major variations from one region to another,” he said.

Another factor is the slash-and-burn technique used to prepare fields for agriculture. “Even if the fires don’t increase the deforested area (because vegetation is burnt from already-cleared land), they cause enormous amounts of carbon emissions, and have increased worryingly in recent years,” Margarido said.

Physicist Roberto Kishinami, who specialises in climate change and the sustainable use of natural resources, said the methodology, which was published by the journal Global Change Biology, “is as reliable as PRODES, which is considered a good model at the international level.

“The quantity of carbon varies from one place to another, and the emissions released also vary depending on the kind of intervention, such as cutting, burning or clearing,” he said.

Kishinami, an adviser to ActionAid International, expects the system to be perfected even further, among other reasons because the next satellites of the China-Brazil Earth Resources Satellite programme will carry higher-resolution cameras. “That means better coverage of the Amazon,” he said.

The new methodology and the strides made in curbing deforestation have been reported while the Brazilian Congress is studying President Dilma Rousseff’s veto of 12 articles in the new forest code.

The more precise measurement of deforestation and greenhouse gas emissions will be the best gauge of the effects of the new code.

Environmental organisations say the forest code reforms passed by Congress in late April will undermine protection of the rainforest.

“If the new code, which is more agriculture- than forest-oriented, ends up incorporating what the mixed congressional commission is now approving, such as the elimination of protection of intermittent rivers, deforestation will sharply increase again in the entire Amazon region,” Kishinami said.

The 1965 forest code to be replaced by the new one prohibits the felling of trees at the sources of rivers and along the banks of both permanent and intermittent rivers (which dry up for periods of time).

“Most of the tributaries that feed the big rivers are temporary or intermittent, throughout the Amazon,” he said.

In Margarido’s view, the results have been “very positive” in the last seven years because the struggle against deforestation was based on the Plan for Prevention and Control of Deforestation in the Amazon, within an institutional framework built up over the last three decades, “of which the 1965 forest code was a key piece.”

“The dismantling of the code, which Congress is doing with the government’s consent, could lead to a troubling setback,” he said.