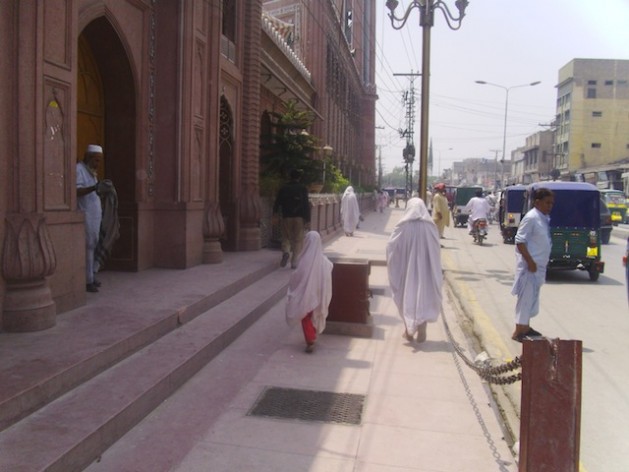 In Peshawar City, in Northern Pakistan, donors and former supporters have turned their backs on the Taliban this Ramadan. Credit: AShfaq Yusufzai/IPS

PESHAWAR, Pakistan, Aug 20 2012 (IPS) - For the past five years Sharifullah Shah, a local doctor from the conflict-ridden North Waziristan province in Pakistan, has handed over 500 dollars to the Taliban during the month of Ramadan. But this year, he is putting his money straight into the Edhi Welfare Centre, where he knows it will reach those in need.

“I know the (Centre) uses this money to educate and care for orphaned local children, while the Taliban insurgents just pump my money into their violent actions,” Shah told IPS, adding that his donations to the Taliban were tantamount to “aiding terrorism”.

Across Taliban-controlled areas in Pakistan, former supporters are turning their backs on the group, angered by the unrelenting violence.

“We have been giving 2.5 percent of our earnings in Zakat to the Taliban for the past 10 years because we wanted our money to be spent in the service of Allah but this year we stopped because the Taliban killed people in terrorist attacks using our money,” Umar Gul, a cloth-merchant in old Peshawar city, told IPS.

A regular and generous donor to the Taliban, Gul now wishes he had never made those contributions.

At the end of 2001, when U.S.-led coalition forces toppled the government in neighbouring Afghanistan, people swarmed the donation camps, established by religious parties on behalf of the Taliban, because they held the latter in high esteem, believing them to be defenders of Islam.

“Now, they (Taliban) have become kidnappers, extortionists and killers of humanity,” Gul stressed.

A local prayer leader told IPS that the Taliban had once been a primary recipient of the huge charitable donations made during Ramadan.

Now, with the group refusing to cease hostilities even out of respect for the holy month, people are more and more reluctant to loosen their purse strings in the service of violence.

“We, the Muslims, are of the firm belief that the month of Ramadan brings a plethora of blessings for human beings and those who resort to killing and injuring during this time have no relation to Islam,” he said.

“My followers used to hand more than 1000 dollars to a jihadist group working under the umbrella of Tehreek Taliban Pakistan (TTP) every Ramadan but they have plainly refused to pay them donations anymore,” he added.

Mian Iftikhar Hussain, spokesman of the Awami National Party government in Pakistan’s Khyber Pakhtunkhwa province, whose only son was killed by militants in July 2010, echoed these sentiments.

“Islam preaches brotherhood and peace while the Taliban are doing exactly the opposite. We (requested) the Taliban to desist from militancy during Ramadan but all such pleas fell on deaf ears,” he lamented.

With donations slowing to a trickle, Taliban militants have resorted to bank robberies and kidnapping for ransom, he added.

On Jul. 21, the Dawn newspaper quoted a Punjab province police officer, Raja Tahir, as saying that a gang of dacoit involved in bank robberies funded the Taliban.

“We have traced 34 robbers belonging to Kohat district in Khyber Pakhtunkhwa, which is involved in funding the Taliban,” he said.

Shopkeepers in Peshawar city told IPS they have noticed a sharp increase in donations to local charity organisations.

“Nowadays we have to empty the donation box for the Shaukat Khanum Memorial Cancer Trust every day. Before Ramadan it used to take three day to fill up,” Imran Ali, a manager at the Imperial Stores in Peshawar Cantonment, told IPS.

He said many commercial establishments no longer allow donation boxes for the Taliban to be placed in their stores because “the Taliban have become synonymous with terrorism”.

Maulana Muhammad Sattar, a religious scholar and former Taliban sympathiser, believes the most deplorable part of the Taliban’s savagery is the pride they take in every act of terrorism.

He recalled the attack on a school bus in Peshawar last October that killed three school children and wounded 10 others, for which the Taliban quickly claimed responsibility.

“Acts such as killing little children are simply inhuman and no sane person on the earth will approve of them,” he said.  By crossing this line, the Taliban has significantly watered down its own support base.

On Sunday, even prayer leaders condemned the Taliban and told people that donating to the group was not a service to Islam or humanity.

“We should think before making donations because the Taliban have now adopted the path of terrorism and giving charity money to them is not appropriate,” Maulvi Tabriz Khan announced at an Eid sermon in Board Colony, Peshawar, on Sunday.

He informed his congregation that Pakistan had a huge number of philanthropists but the money was wasted in the hands of the Taliban.

He added that the Taliban had now become the worst enemies of humanity and donations would only make them stronger.

“The people donating to them will not receive Allah’s blessing but rather face the Divine’s wrath,” he said.