BANJUL, Aug 24 2012 (IPS) - Mohamed Ceesay, a 20-year-old farmer from the Central River Region in the Gambia, is a high school dropout. But thanks to an initiative to discourage local youths from emigrating to Europe, he earns almost half the salary of a government minister from his rice harvest. 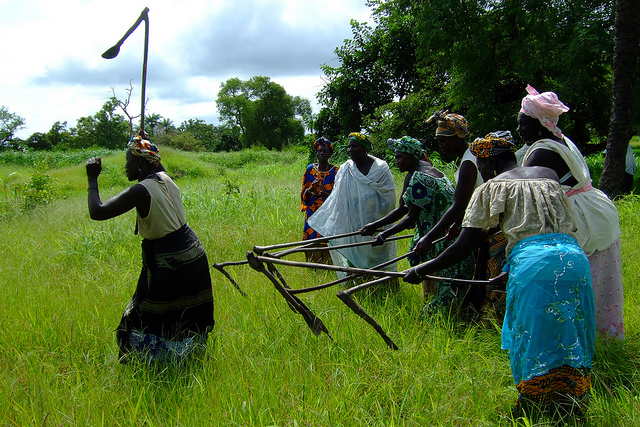 The Gambian government has provided farmers in 10 of the country’s most-vulnerable districts with inputs such as power tillers, tractors, rice threshers, seeders, sine hoes and bags of fertilisers. Credit: DW / Manuel Özcerkes/ CC by 2.0

“In July I harvested 20 hectares of rice fields on my own farm, and our association harvested 100 hectares across the Central River Region. We earn more than what our ministers are earning today,” he told IPS.

He earns 35,000 Gambian dalasi or 1,170 dollars every three months or so – half of what government ministers in this West African nation earn. Their monthly salaries are around 667 dollars, which amounts to almost 2,000 dollars over three months.

Ceesay is one of 50 young farmers from “Operation No Back Way to Europe”, an association founded in 2008 that aims to discourage youths from illegally emigrating.

Indeed, some of the young farmers in the organisation have attempted to enter Europe unlawfully, but they were deported back to the Gambia. Edrissa Sane, 23, is one of them.

“Before, I used to ask my family to help me go abroad in search of greener pastures. I have tried several times by voyaging by sea on a small boat to Spain. I did not succeed because we were arrested and deported back to the Gambia,” Sane said.

But since he joined “Operation No Back Way to Europe” he has no desire to make the dangerous and unlawful journey to Europe again.

“I earn more than 30,000 Gambia dalasi (about 1,000 dollars) in just a few months. That is enough for me, rather than voyaging across the sea to lose my life,” the rice farmer told IPS.

Edrissa said that he regretted not venturing into farming sooner as he now earned a good living.

The chairman of “Operation No Back Way to Europe”, Bubacarr Jabbi, told IPS that the association was working with the Immigration Department and the Gambia Police Force to reduce illegal emigration.

Over the years, more than 200 Gambian youths have died while crossing the seas to Europe. At one point, more than 600 youths a year were attempting to emigrate unlawfully. However, according to statistics from the Gambia Immigration Department, only 60 attempted the journey in 2010/2011.

“We believe in action and therefore urged other relevant stakeholders to come to the aid of the youth in order to inform them about the implications of illegal emigration,” Jabbi said.

One of their initiatives to keep young people in the Gambia has been youth farming. “Operation No Back Way to Europe” has young farmers across the country, in the Lower, Central and Upper River Regions.

And as the 2012 harvest approaches this September, the organisation has promised that its farmers will have a bumper crop. It estimates that they will produce 4,500 tonnes of NERICA.

Currently, the country has only 100 registered rice farmers who produce between 10,000 and 15,000 tonnes of rice a year.

The Gambia, Africa’s smallest country in the Sahel zone, was in the midst of a food crisis last year when the government announced a national emergency in March after declaring the 2011 crop season a failure. At the time, about half the country’s 1.4 million people were affected by food insecurity.

According to a United Nations Development Programme report, the country experienced an almost 70 percent reduction in food production, with 19 of the country’s 39 rural districts being the most affected because of low rainfall. According to the report, rice production in the country fell by 74 percent.

The U.N. Food and Agricultural Organization office in Banjul said that vulnerability to food insecurity would continue to rise in the country, especially among farmers who faced an early and protracted lean season because of decreased income and household food stocks.

In addition, the prices of basic food commodities have skyrocketed over the last year. Many here cannot afford to buy a 50-kilogramme bag of rice that now costs almost 33 dollars when it previously cost 20.

However, the government says that agriculture remains the prime sector with which to reduce poverty, generate investment and improve food security. And this is the reason why it wishes to see further investment in the sector.

According to the agricultural director of Central River Region, Ousman Jammeh, the success of young farmers from “Operation No Back Way to Europe” is thanks to the support of the Gambia Emergency Agricultural Production Project or GEAPP.

The European Commission-funded project, run by the Gambian government, has provided farmers in 10 of the country’s most-vulnerable districts with inputs such as power tillers, tractors, rice threshers, seeders, sine hoes and bags of fertilisers – all for free.

Jammeh told IPS that since some farmers in the Gambia had been supplied with proper farming inputs, their production levels for the 2012 harvest should increase. The GEAPP distributed 3,000 tonnes of fertilisers to 600 villages, 300 power tillers, 367 seeders, 367 sine hoes and 367 threshing machines, and 525 tonnes of seed.

“GEAPP has the objective, due to soaring food prices, to enhance agricultural production in the country’s most vulnerable villages by providing access to inputs and machinery, and through the rehabilitation of 35 village seed stores and 23 seed multiplication centres,” he said.

Ceesay, who only started farming last year, is one of the farmers expecting an increase in his crop yield. He estimated that he would have more than 300 50-kilogramme bags of rice from his harvest. Last year he produced 200.

“This year, we had all the farming materials and inputs in place ahead of time and used them. (Not having inputs) was our major problem that contributed to our poor season last year,” Ceesay said.