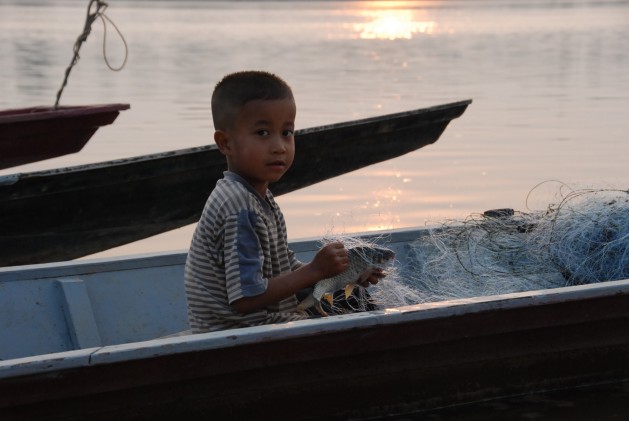 BANGKOK, Aug 28 2012 (IPS) - Impoverished Laos is unlikely to cancel a Thai project to build a mega dam across the Mekong River at Xayaburi, despite warnings from the International Union for Conservation of Nature (IUCN) that it could devastate the region’s rich biodiversity.

Over 1,780 known freshwater fish species have been identified in the ‘Indo-Burma biodiversity hotspot’ which includes the Mekong and parts of the Chao Phraya River that flows through Thailand, revealed the 158-page report released last week by the IUCN, ahead of its world congress to be held in Jeju, South Korea from Sep. 6-15.

IUCN, which is based Switzerland and is world’s oldest and largest global environmental network, assists societies throughout the world to conserve the integrity and biodiversity of nature and to ensure that the use of natural resources is equitable and ecologically sustainable.

“The Mekong ranks third (after the Amazon and Congo) or second in the world in terms of diversity of river fish depending on whether the verified species total or the higher estimate is accepted,” notes the IUCN study,  ‘The Status and Distribution of Freshwater Biodiversity in Indo-Burma’.

The study has strengthened a growing anti-dam movement that has united campaigners from several countries in the region that are likely to be affected by the 1,260-megawatt hydropower project being built at a cost 3.8 billion dollars.

“This is an unprecedented scientific contribution for us to know what is in the river between (the Laotian cities of) Luang Prabang and Vientiane,” Robert Mather, head of IUCN Southeast Asia, told IPS. “It shows how little we understand the river or the impact of the planned dam.”

The report is expected to feed discussions about dams like the Xayaburi at the IUCN gathering at  Jeju, which is expected to include more than 1,200 government and non-government organisations (NGOs) from 160 countries.

“This study will help to shape the real questions that need to be asked when doing EIAs (environment impact assessments) before building the dam,” Mather said.

Early August, Thai communities rallying against the Xayaburi dam had lodged a petition against the energy ministry and the state-run Electricity Generating Authority of Thailand (EGAT) in the country’s administrative courts, charging these bodies with failure to inform the public about the environmental and social impacts of the dam.

But, on Aug. 24, Norkun Sitthiphong, permanent secretary in Thailand’s energy ministry, announced that construction work for the Xayaburi dam was on track and that electricity production was scheduled to begin by 2019.

“The Xayaburi power plant plays a crucial role in Thailand’s power development,” the Thai official said, affirming the close link Thailand has as a major investor of this dam, the first of a cascade of 11 dams being planned to harness the lower waters of Southeast Asia’s largest river.

Earlier studies by the Mekong River Commission (MRC), an inter-government agency, estimate that the proposed dams could result in agricultural losses worth more than 500 million dollars annually and reduce dietary fish intake of Thai and Lao people by 30 percent.

It could also result in the creation of reservoirs along the Mekong,  studies by the MRC, in which Cambodia, Laos, Thailand and Vietnam are members and Myanmar (or Burma) and China are dialogue partners.

The MRC is yet to clear construction for the dam and announced in December that it would approach international development partners to study the dam’s implications before doing so.

Activists believe that it is not too late to stop the Xayaburi dam especially because of a growing movement against it.

“This is the first time local communities have gone to the Thai courts to stop a cross-border hydropower project,” says Premrudee Daoroung, co-director of Towards Ecological Recovery and Regional Alliance, Bangkok-based green lobby.

“They are turning to a clause in the Thai constitution that requires government agencies to conduct public hearings on projects like the Xayaburi dam, which will impact Thai communities and Thailand’s biodiversity,” she told IPS.

“Their biggest concern is that the dam will devastate fishing in the Mekong, which has been their main livelihood for generations,” Daoroung told IPS. “Their campaign began out of fear that the Xayaburi dam will affect the annual fish migration in the Mekong.”

Loss of biodiversity is another concern. “The currency for measuring fish biodiversity is species, not kilograms, dollars or catch per unit of effort,” the IUCN report said.

Grassroots communities in Cambodia and Vietnam have expressed similar concerns in their ‘Save the Mekong’ campaign.

The Xayaburi dam could, they say, threaten the livelihoods of some 60 million people living in the lower Mekong, who harvest an estimated 2.2 to 3.9 billion dollars worth of fish caught annually – or about a quarter of the world’s annual inland-water catch.

Besides food security this campaign, which has now been endorsed by nearly 60,000 people, has also forged other bonds.

“The outcry has been strong because of the centrality of the river to millions of people, as well as to the region’s history and cultural identity,” says Carl Middleton, a Mekong River expert who lectures at the International Development Studies Programme at Bangkok’s Chulalongkorn University.

“Just as the river is shared between the countries, so the proposed Xayaburi dam has brought many people together in opposition to the project,” he told IPS. “The size of the public response opposed to the Xayaburi dam is unprecedented for a hydropower project in the region.”

But, the protests have produced a mixed response from Laos, one of the poorest of the six countries that shares the Mekong, a 4,880 km-long river that flows through southern China, touching Myanmar (or Burma) and Thailand, and through Laos, Cambodia and Vietnam.

Laos has set its sights on becoming the battery to the region by tapping its rivers through mega-hydropower projects and selling the energy generated to its neighbours, such as Thailand. The foreign exchange, Vientiane argues, can help one-third of the country’s 5.8 million population living in poverty.

Laos had assured neighbours, Western donors and an intergovernmental river development body that it would not proceed with the controversial dam till the cross-border environmental and social impacts have been assessed. In July, Vientiane had even announced suspension of the project.

Ch. Karnchang Plc (CK), one of Thailand’s largest infrastructure builders and owner of 50 percent of the shares of Xayaburi Power, the controversial dam’s developer, suggest otherwise.

In mid-August, CK’s chief executive Plew Trivisvavet confirmed that the dam developer had not skipped a beat in its construction plans. “We’re still working on the project, as no one has told us to stop,” he told journalists.