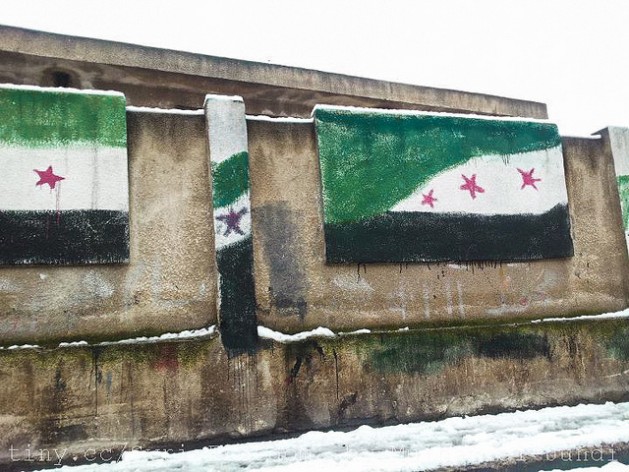 A Syrian independence flag painted on on a government school wall. Credit: Freedom House/ CC by 2.0

WASHINGTON, Aug 23 2012 (IPS) - As violence in Syria spikes after a short lull, the prospect of international military intervention appears to be growing by the day. Earlier this week, almost exactly one year after President Barack Obama first called on Syrian president Bashar Al-Assad to step down, Obama warned of “enormous consequences if we start seeing movement on the chemical weapons front or the use of chemical weapons”.

Though the warning hardly indicated a significant policy shift in the Obama administration’s response to the growing catastrophe in Syria, it does represent the latest step in a slowly shifting willingness of administration officials to consider the use of direct military force against the Syrian state.

Early reactions of the Obama administration – and much of the American public – were largely opposed to yet another foreign military intervention.Still reeling from setbacks in Iraq and Afghanistan, with forces stretched into Yemen, Pakistan, Mali, and elsewhere, administration officials were also discouraged by the lack of political capital gained by the controversial intervention in Libya.

They pushed back against committing the United States to yet another military endeavour in the Middle East, despite strong urging from hawks in both parties that advocated an immediate aerial campaign against the Assad regime.

However, Washington has not been content to sit on the sidelines and wait out the conflict; it has deeply involved itself on all levels of the uprising – from the daily violence to the transitional plans –hoping to mould the process and outcome to suit its own regional geopolitical interests.

Instead of committing U.S. troops, the administration has chosen a different tactic. For months, Washington has been facilitating the arming and coordination of the Free Syrian Army, the loose umbrella group of militia members, foreign fighters and army defectors that has rapidly grown in size and capacity to take on Assad’s security forces.

Reuters recently uncovered covert CIA involvement with the Free Syrian Army in Turkey, and the administration has allowed a U.S. organization to funnel money to Syrian opposition forces. These moves align the administration not only with the anti-Assad opposition writ-large, but with a particular subset of that opposition movement that has prioritised a violent struggle above all other alternatives.

An armed uprising to unseat a dictator is not necessarily an illegitimate course of action; many successful and inspiring revolutions have followed a similar course. However, the armed uprising in Syria is arguably the least legitimate component of the country’s two-year revolution.

From the very outset, “rebels” have had to rely on financing, equipment and even manpower from external sources, often either from other autocratic neighbouring states with non-democratic expectations for a post-Assad Syria, or from international players with disastrous track records of involvement and influence in Middle Eastern political affairs.

In this context, there are no indications that this iteration will somehow be substantively different than the countless others that have come – and failed – before it.

Syrian proponents of international military intervention are well aware of these dangers, yet some have consciously chosen to disregard them. The majority, however, claim that these complications are a necessary price to pay in the absence of any other alternative. Without Gulf and Western involvement, they argue, the opposition is doomed to defeat, which would inevitably result in a bloodbath for the people of Syria.

This claim belies the fact that the conflict does not exist in the black-and-white binaries presented by pro-intervention groups. Armed insurrection is not the only way to bring down the Assad regime, and the strengthening of armed groups directly undermines alternative methods of resolution to the conflict.

The opposition encompasses a number of different forms, with widely divergent tactics, and commensurate variation in efficacy and legitimacy. It is highly telling that popular demonstrations in Syria have all but vanished as the armed insurrection has gained control and prominence.

Anecdotal evidence points to the rapid disillusionment of many Syrians with armed gangs that have “hijacked” their uprising, potentially to advance the interests of some foreign power with designs for Syria. Charles Glass, a former ABC News chief Middle East correspondent who recently returned from Syria, warned that the Syrian popular democratic opposition is being “drowned out in the cacophony of artillery and rifle fire”.

The effects of the armed uprising are also being felt across the region. In addition to sizable refugee outflows into Turkey, Lebanon and Iraq, the Syrian crisis has served as a catalyst to reignite long simmering tensions in its neighbouring states, a particularly dangerous development for the fragile political equilibrium in Lebanon.

In clashes yesterday, at least a dozen individuals were killed in a gunfight between pro-Assad and anti-Assad factions in Tripoli, and Lebanon has been host to a number of kidnappings of Syrian individuals in retaliation for Lebanese kidnapped earlier in Syria.

It is in this context that Washington’s positioning toward the crisis is particularly dangerous; the explicit support for the armed opposition has effectively edged out all alternatives. It has sidelined moderates, nonviolent activists and a large portion of the Syrian population that has no love for Bashar Al-Assad, but no interest in a Qatari, Saudi or American vision for a future Syrian state.

More importantly, it has emboldened the rebels to continue on a course that will inevitably lead to greater bloodshed, animosity and social collapse. The current course of action gives undue power and political legitimacy to outside actors with little to lose in Syria’s continuing descent into chaos; they can afford to hold out for maximalist objectives because they are not the individuals bearing the costs.

The Syrian regime, similarly buttressed by Russian and Iranian attempts to maintain strategic positioning, has openly floated the idea of an Assad resignation, and advocated the beginning of a dialogue with opposition groups.

Based on the regime’s history of reneging on internationally-mediated efforts to end the violence, the sincerity of this pledge is clearly circumspect. It does, however, represent a growing awareness within some Syrian circles that dialogue is the only way out of this stalemate that would keep the Syrian nation intact, a fact that the militarised Syrian opposition refuses to acknowledge.

As the last remaining U.N. monitors depart Syria today amid bombs and artillery fire in Damascus, it seems that the rest of the world has done the same.