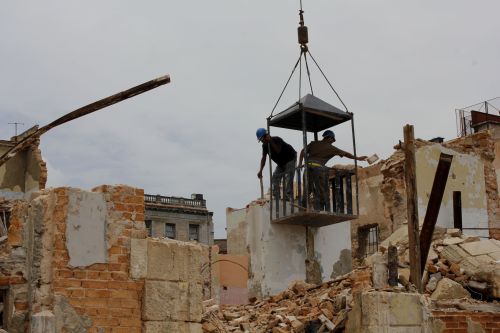 The authorities in Cuba want most productive activities in construction to gradually shift to the private sector. Credit: Jorge Luis Baños/IPS

HAVANA, Sep 26 2012 (IPS) - “The most important thing for Cubans is their home,” says Raimundo Pérez, a real estate broker who is familiar with the travails of finding housing, despite the latest incentives made available by the Cuban government.

“Some people save their pennies, others have worked abroad for years, and I know of other cases where they sold everything to buy their own little house,” Pérez commented.

“Prices keep going up because of the scarcity of housing,” said the Havana resident and professional gardener who has been working for years as an intermediary in the buying and selling of homes without an official license. He preferred to use a pseudonym when speaking with IPS.

The magnitude of the deterioration and shortage of housing in Cuba will be known more fully after the results are available from the national Population and Housing Census conducted Sept. 15-24.

From the last national census in 2002 to date, 13 hurricanes have battered the island and the number of new homes built annually began dropping as of 2007. With the economic reforms now underway, construction permits became easier to obtain, more materials were made available for sale, and the buying and selling of homes was legalised, among other changes.

A decade ago, the census found 3,534,327 housing units, for an average of 3.15 people per unit. Homes in poor condition accounted for 15 percent of the total in cities and almost 38 percent in rural areas.

The housing situation is now more complex. In 2004, the authorities estimated a shortage of more than half a million homes. To meet that demand, it would be necessary to build 80,000 homes annually for 10 years, including 20,000 in Havana.

Given that need, in 2006 a special programme was launched for the preservation and renovation of housing, which increased government spending in that sector by more than 30 percent.

In fact, the goal set was higher that what was needed, 100,000 new homes annually. But it was only met that same year, with 111,373 – an exceptional feat in recent Cuban history. The pace slowed abruptly in 2007, and in 2011, about 32,540 units were built, according to the National Office of Statistics and Information (ONEI).

Like many young people, Alejandro Robaina does not aspire to having his own home. “With my salary, I’ll never have enough to build or buy one,” said Robaina, who works in a privately-owned cafeteria in Havana. When he found out his wife was pregnant two years ago, he rented an apartment in San Miguel de Padrón, a municipality on the outskirts of Havana.

“Places for rent are scarce and very unstable. The day that my daughter was born, I had to take all our things out of our apartment, because the owner needed it,” he said.

“We went to live with my mom until we could find another cheap place to rent in San Miguel. And we’re still there,” the 23-year-old told IPS, crossing his fingers for luck.

Homes in Havana have an average age of 75 years, according to an estimate by architect Miguel Coyula in an article made available to IPS, “Havana, an aged city”. Homes that are in good condition are mostly located in the central Cuban cities of Matanzas, Cienfuegos and Sancti Spíritus, while 50 percent of those in fair to poor condition are in the east.

With the economic crisis that this country has faced since the early 1990s, construction overseen by state companies came to a halt for reasons that included a decrease in government spending, a low-productivity workforce, a lack of skilled labour, and the poor quality of homes built.

With the goal of decentralisation, the authorities are trying to ensure that 70 percent of housing-related productive activities are conducted by the “non-state,” or private, sector by the year 2015.

According to Cuban law, homeowners, who account for 90 percent of occupied Cuban housing, are responsible for the upkeep and maintenance of their homes.

Therefore, in 2010, it became easier to obtain permits for the construction of self-built housing, expansions, remodelling and divisions. In 2011, construction materials were made available in Cuban pesos (instead of hard currency), although the supply does not meet demand, nor are the prices accessible for people who earn average wages.

Low-income individuals who want to renovate or expand their homes may apply for a local government subsidy. From 2011 to mid-June of 2012, some 7.3 million Cuban pesos (the equivalent of 232,700 dollars) had been granted. A little over half of that amount was actually used, for reasons such as shortages of materials.

In addition, a new programme went into effect in January allowing citizens to apply for bank loans, which cover housing repairs, agricultural production incentives and private businesses. A month into the programme, most applications were for home repairs, which are “very costly for a significant number of homeowners,” Coyula said.

“Putting food on the table and building at the same time is too expensive,” commented Yusmila Guevara, who lives in Mayabeque province, which borders Havana.

Guevara saved up the extra pay she earns every semester at her state job as a researcher to pay for the completion of a half-built home that she and her sister inherited from their father.

“It took me two years just to put in the flooring, electrical and water systems and finish the windows in my part of the house, and to add a bathroom,” Guevara told IPS.

“The labour and materials are very expensive,” she said. “I still need at least 5,000 pesos (about 160 dollars) to finish everything,” said the 33-year-old, who wants to have her own home to be able to have a child.

“I pushed things along a bit when they began selling cement in Cuban pesos, but you have to have a lot of money,” Guevara commented.

Her sister, Maidelys, worked as a nurse in Venezuela for three years, and thanks to that job, she was able to “finish her part of the house, and to do so the way she liked,” she said.