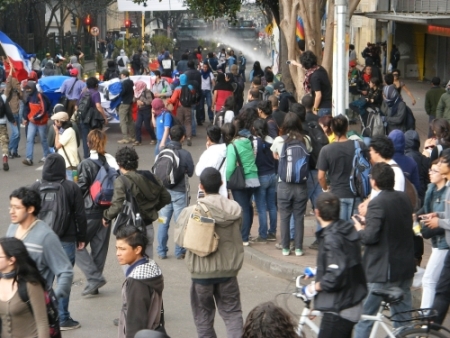 Protests held in Bogotá by groups that suffer the consequences of the war and do not feel represented in the peace talks. Credit: Constanza Vieira/IPS

BOGOTA, Oct 17 2012 (IPS) - Closed-door talks between members of the FARC guerrillas and the Colombian government began in Oslo Wednesday, after the delegates were taken from the airport to an undisclosed location.

The negotiators plan to speak to the press in the Norwegian capital on Thursday. The two delegations travelled to Norway separately on Tuesday afternoon.

The government and the communist FARC (Revolutionary Armed Forces of Colombia) rebels, which have been fighting since 1964 and control a large part of rural Colombia, each named five chief negotiators, five alternates, and 20 other delegates as advisors.

The number of delegates formed part of the agreement reached after a year and a half of exploratory talks held in near total secrecy, with Norway and Cuba as guarantors and Venezuela and Chile as observers.

A source close to the FARC told IPS that in Wednesday’s meeting, the insurgent group’s delegation would draw attention to an “empty chair.”

While there are five government delegates, there are only four sitting on the FARC’s side of the negotiating table.

The empty chair belongs to Simón Trinidad, nom de guerre of former banker Ricardo Palmera, who was extradited to the United States in 2004 by then president Álvaro Uribe (2002-2010). Trinidad is serving a 60-year sentence in a Colorado maximum security prison for the FARC kidnapping of three U.S. military contractors in 2003, who were held as hostages by the rebel group until 2008.

By naming Trinidad as one of their principal negotiators, the FARC is apparently indicating that his extradition marked the start of the undermining of Colombia’s autonomy in solving its internal armed conflict.

The group also appears to be pointing out that the peace talks require definitions of the U.S. role in the counterinsurgency war in Colombia, where it is the main source of military funds and the principal military strategist.

On Sept. 7, Colombia’s RCN radio station read out a letter from Trinidad in which he told President Santos: “My attendance as a peace delegate is feasible…All it would take is a simple political and diplomatic request on your part to the government of the United States; you know that very well.”

There has been no public reaction on the question by the government of Barack Obama.

On Tuesday, INTERPOL’s (international police) wanted list still included the names of two other FARC negotiators facing U.S. arrest warrants in connection with the kidnapping of the three military contractors: Andrés París (Emilio Carvajalino), one of the FARC’s chief negotiators, and Tanja Nijmeijer, a Dutch-born rebel who forms part of the team of advisers.

The empty chair has been a symbol in peace talks between the government and the FARC since January 1999.

At that time, the then FARC commander Manuel Marulanda left his seat empty next to then president Andrés Pastrana (1998-2002) when formal negotiations began in San Vicente del Caguán in southern Colombia.

On that occasion, Marulanda – described to IPS by someone in the know as “a tremendously wary peasant and a born military strategist” – contended that the FARC had uncovered a plan to assassinate him during the ceremony.

According to another source in Bogota, the second issues that the FARC will bring up in Oslo is the need for a comprehensive peace process, that would also include the National Liberation Army (ELN) in parallel talks.

The ELN, which also emerged in 1964, inspired by the Cuban revolution, is smaller than the FARC but has an influence over many communities.

In 2009, the FARC and the ELN put an end to a war between regional structures of the two guerrilla armies, which had led to the deaths of insurgents as well as civilians and had driven a wave of refugees across the border into Venezuela.

The agreement between the two rebel groups included a commitment not to negotiate for peace without the other insurgent organisation.

A communiqué issued by the leaders of the FARC and the ELN, with a September dateline, reported that a summit of guerrilla leaders had stressed the two group’s staunch determination to seek a peace agreement, and the aim to make their “ideas and actions converge.” However, they did not specifically state an interest in talks between the ELN and the government.

The same source close to the FARC told IPS that eventual negotiations with the ELN would be independent, until the two processes merged into one towards the end of the talks, when the question of victims would be addressed.

The source also confirmed that there have been contacts between the ELN and the government.

At the meeting between leaders of the two insurgent groups, they decided to mutually back the negotiating agendas of the respective peace processes.

The agenda for talks with the FARC contains five main points: land, political participation, an end to hostilities with the surrender of weapons, drug trafficking and victims.

The ELN agenda refers to power relations, territory and population, as well as natural resources and sovereignty.